In the latest installment of the “Good News” series, the Ball State English department highlights the accomplishments of our faculty and students up through the month of April.
Yes, we’re a little late. Finals are tough!

Drs. Frank Trechsel and Carolyn Mackay have each received a sizable fellowship which will allow them to do a year of research in Mexico. The grant was part of a joint initiative between National Endowment for the Humanities (NEH) and the National Science Foundation (NSF) to support fieldwork and other activities relevant to recording, documenting, and archiving endangered languages. Their project title is “A Dictionary of Misantla Totonac,” and it was one of just 232 humanities projects awarded in the United States and one of seven in the state of Indiana.

Dr. Pat Collier will be a Virginia Ball Center Fellow in Spring 2016. In his symposium, “Everyday Life in Middletown,” students will study and create a documentary film about everyday life in Muncie, drawing on the growing body of “theory of everyday life” and borrowing from the radical aesthetics of the revolutionary Mass Observation project in 1930s Britain. The project will thus partake in—and revise and expand—the tradition of “Middletown Studies.”

Dr. Mary Lou Vercellotti‘s article “The Development of Complexity, Accuracy, and Fluency in Second Language Performance: A Longitudinal Study” was recently published in Applied Linguistics, one of the top three linguistics journals in her discipline. This study is note-worthy because the results offer the field important evidence to inform language learning theories and will most likely inform future language-learning pedagogy.

Prof. Liz Whiteacre is the recipient of a 2015 Excellence in Teaching Award. She will be provided the assistance of an instructional development team and stipend for her project, titled “Building Community: Engaging Students through Literary Citizenship,” to redesign her ENG 308 Poetry Writing course. Prof. Whiteacre will also be recognized at the Fall Convocation.

Dr. Megumi Hamada is the recipient of an ADVANCE Proposal Development Award which will allow her to take a course release in Spring 2016 to focus on her research.Prof. Pete Davis was chosen by the Student Honors Council to receive the 2015 C. Warren Vander Hill award for outstanding honors faculty.

Dr. Adam R. Beach published “Literary Form and the Representation of Slavery in Dryden’s Don Sebastian“ in Volume 44 of Studies in Eighteenth-Century Culture (2015).

Dr. Lyn Jones won the top Diversity research award at the Diversity Awards Program hosted by Associate Provost of Diversity, Charlene Alexander.  Out of 36 nominees, she had the most scholarly publications committed to diversity on campus.

Alice Thomsen receives her award from Dr. Adam Beach, chair of the department

Check out our March post for more Good News about our graduate students!

Austin Schlick accepted a job offer with RCI in Indianapolis. He will be working as a travel guide and agent.

Wesley McNight, a post-bac English Education student, was recognized at the Indiana Association of Colleges of Teacher Educators (IACTE) Outstanding Future Educators reception, which was held in April in Carmel, IN. He was one of five Ball State students recognized at this event.

Rebecca Jackson, Erin Silcox, and Katherine Vellenga have all received academic honors in writing. The Academic Honors in Writing program fosters and rewards excellence in undergraduate writing at Ball State. At commencement, selected graduating seniors are honored for their superior writing skills. This prestigious achievement is acknowledged in the commencement program and on the recipients’ transcripts.

Katherine Vellenga and Hannah Vollmer have both received departmental honors in writing. Academic departments annually submit portfolios of outstanding student writing. Those students whose portfolios are forwarded to the university level of the competition by the English Department are awarded Departmental Honors in Writing.

To see ALL the awards we gave out recently at our yearly Departmental Awards Ceremony, take a look at the program for the event! 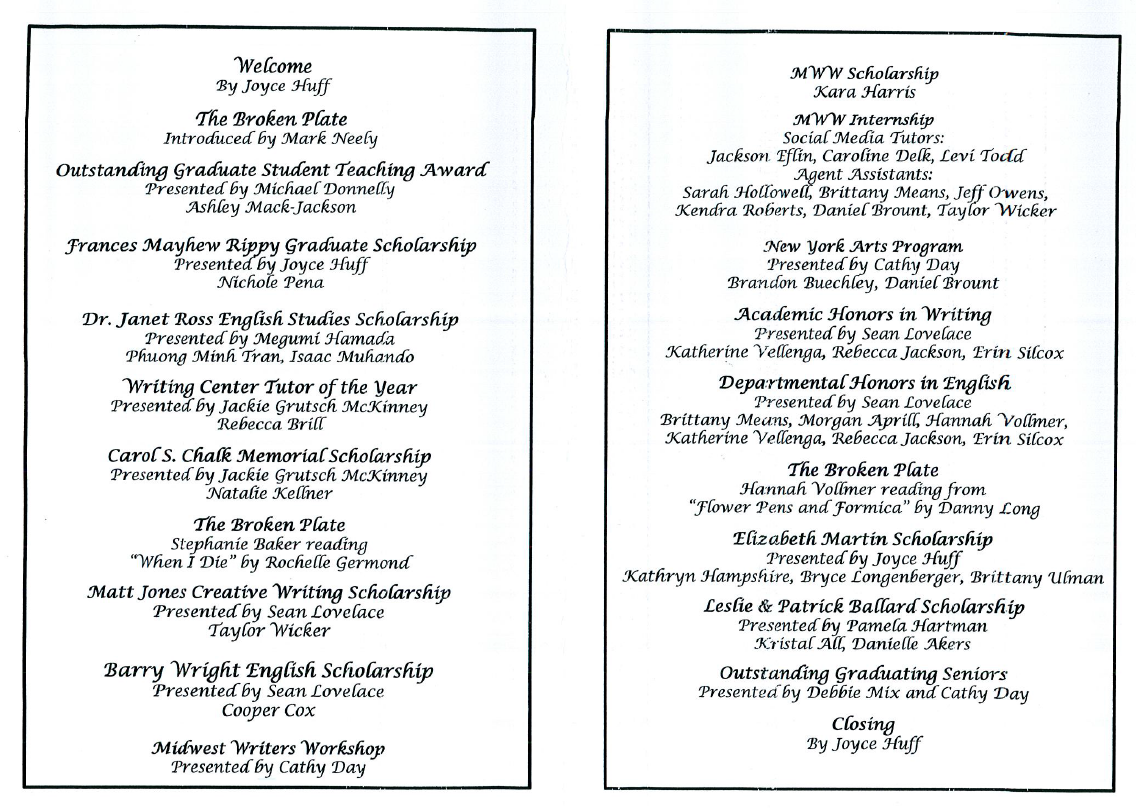