In our latest post, English intern Tyler Fields interviews Assistant Teaching Professor Mai Kuha about her work as a linguist, her participation in Ball State’s Council on the Environment, and her future plans and publications. Additionally, Mai discusses her recent work in the fields of socio- and ecolinguistics. Continue reading below to see Mai’s interview. 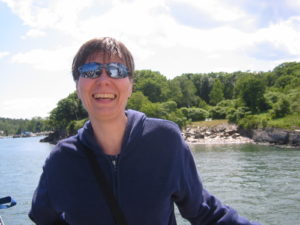 Briefly describe what linguistics aims to uncover, especially at the graduate level.

I think for us at Ball State, it’s really a different answer depending on which group of students you’re talking about. We have a strong emphasis in TESOL at the graduate level. What I know more about is the undergraduate level, and I see many education majors in my classes, especially in English 321. Some of them are going to teach language arts, and some are seeking certification in English as a New Language (ENL). When these students become instructors, they will have learners in their classes who do not speak English as a primary language. For both groups, it’s really important to have a good basis in the structure of English. They are probably not going to teach linguistics, but we concentrate on what they need to know about the structure of the language.

Sociolinguistics looks at the connections between society and language. How does language play a role in society? A lot of it has to do with power. I think that’s what really makes this important. Which are the powerful groups? What is their language? They are in a position to make their language of the prestige variety. And what are all the repercussions of that? The way that the average person perceives all that is that there is “good English” and “bad English.” People seemed to have internalized this notion that standard English is “good,” not realizing that the standard is considered good really because of historical and political and social reasons. It’s not because standard English is somehow inherently superior. And all of that affects everybody’s lives and yet it’s kind of invisible. So many people of minority backgrounds are discriminated against because of these language issues, and they (and we) don’t perceive it as discrimination, they just perceive it as “bad English.” That, I think, is a very important aspect which sociolinguistics gets at. And this all has to do with variation. Everything varies. Linguists look at how language changes on the basis of the speaker’s gender, ethnic background, age, occupation, socio-economic status, etc. This is all part of sociolinguistics: understanding more of what goes on socially in our lives by looking at the language aspect of it.

Ecolinguistics is somewhat of a new thing. Well, it’s new in terms of the prominence that it has because, in reality, work in ecolinguistics dates back to the 1970s. Even now, it’s a small subfield of linguistics. To me, ecolinguistics is investigating how we talk about the natural environment, and how that discourse and our language affect how we interact with the natural environment. And so, in this sense, it’s really a variation of critical discourse analysis. We can analyze any discourse and use that analysis and discussion to discover what beliefs underlie ideological structures and also to critique that. And this all applies to environmental discourse.

If people were to look up the definition of ecolinguistics, they would run into some confusion. For some, ecology is a means by which to understand discourse and language metaphorically. For instance, in the same way that an ecosystem contains various habitats and species, the United States could be understood as an ecosystem in which several languages live; one language could be a predator taking over smaller languages.

Can you tell me about your work on the Council on the Environment at Ball State University?

The Council on The Environment or COTE is an advisory group more than an activist group. We’re trying to see the current state of sustainability at Ball State. We poll university employees regularly to ask them about their sustainability behaviors and if they are actively involved in sustainability projects. So we get a baseline of where we are in terms of how we do things at Ball State, and then we try to think of the next steps. Once we’ve gathered some information, the committee proposes resolutions, which we then try to pass through the university.

I noticed that some of your more recent publications focus on such topics as ecology. Can you describe how linguistics and ecology inform one another?

There hasn’t been a very specific point which my recent papers have focused on; it’s basically just that whenever I think of something interesting, I’ll write it up. One interesting little thing that came up last year was the case of Casey Anthony, who was tried for the first-degree murder of her daughter Caylee Anthony. In the middle of that, I happened to notice one detail that stuck out to me. Of course, this is trivial compared to the larger scope of the case, but the grandmother, Casey’s mother, said something about her dog having eaten bamboo leaves, and that’s why she said she had done an Internet search, which later looked like it had been her daughter, Casey, searching for toxic substances. So the grandmother was trying to explain that she, in fact, had done the Internet search, and it was because of the dog. And so some journalist reporting on that said “the dog ‘who’ ate bamboo.” They used the pronoun “who,” which some people would say has to be reserved for human beings. And then there were some journalists who didn’t do that, so I was trying to examine this difference in my paper. We are supposed to think of nonhuman animals as beings somehow completely different from us, but in reality, we don’t. People realize that a dog is not an “it.” And what stuck out to me in that situation was that the journalist could have very easily avoided using “who.” Even though there were other options, a minority of reporters referred to this anonymous dog as “who.” By looking at a little detail like that, you can tell something about how people relate to the natural environment, including the species that live in it.

So we can think of it like this: how do we talk about a plant or a dog, etc.? Do we say “climate change” or “global warming” or something else? Those word choices can affect how we think about the issue. We shouldn’t be too deterministic about that, because it’s not like whatever you say puts your mind in a jail, but, certainly, we have good reasons to believe that the labels we do choose kind of nudge our perceptions in one direction or another. And this all relates to metaphor and framing. It’s not just a matter of word choice; there’s this deeper issue that certain words can trigger a way of thinking about something, a frame. That’s why these word choices matter.

Another thing that can be looked at, as I did in one of my papers, is world leaders’ speeches about climate change and the extent to which they seem to be taking responsibility for what has gone wrong, and committing to doing something in the future. This has less to do with the subject of ecology as it does the discourse of how these leaders address the concept of future.

What are some of your future endeavors as a linguist?

At the moment I don’t have my next topic. However, I did just get an email from a friend asking me to write a chapter for a book she is editing, but it’s very early to know exactly what it might become. I’m working with Liz Riddle on a couple of big projects which deal with pragmatics.

Is there anything else you would like to add?

On a personal note, one of the aspects I really enjoy about the field of ecolinguistics is that it almost feels like a family. I can show up at a symposium and it’s a relatively small group, and the big names are always present and giving talks. It has a feel of a family reunion, and you really get to know the people. It’s easier to gain recognition and form a close community.