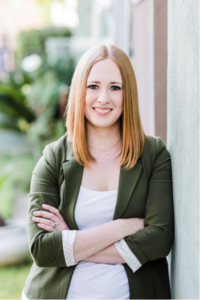 Lydia Storie graduated from Ball State in 2006 with a B.A. in English and History. She also holds an M.A. in Cinema Studies from New York University’s Tisch School of the Arts.

Back in 2012, we published this blog post by Storie. At the time, she was the Director of Development for Original Media at a New York City-based independent production company behind the films The Squid and The Whale.

Since then, she’s moved up in the world! Now she’s the Vice President of Development for Muse Entertainment. Based now in Los Angeles, she oversees the company’s slate of television series and limited series projects targeted to the American market, and has most recently developed, packaged, and sold series pitches to Netflix, YouTube Premium, NBC and WGN America.

Her favorite part of her job is identifying books to adapt for film and television. Sound like a great gig? Then read her post below and come to the Star Party on Oct. 29, 2018 at 6:30 PM in the Stu East Multipurpose Room. She’s the keynote speaker!

Unless you’ve been holed up in the stacks at the Ball State library for the past year, you’ve probably heard something about The Hunger Games: the movie, which is based on Suzanne Collins’ young adult novel, recently opened to the third-largest weekend box office ever.  What’s interesting to me (and maybe you) is that the only two movies that, at the time, had done better also originated from literary source material: the final movie in the Harry Potter franchise and The Dark Knight (yes, comics count). [UPDATE: The Avengers has now shattered the record.]

Last month also brought with it one of the most-hyped deals in entertainment-land so far this year: Universal and Focus Features just acquired of the film rights to E.L. James’ popular erotica novel Fifty Shades of Grey.  News of this book deal is staring at me from the cover of the April 6 issue of Entertainment Weekly, which just so happens to be sitting on the desk near me as I type.

Given that EW is a consumer magazine, not an industry trade paper, it’s clear that most media lovers today are aware of the long-standing relationship Hollywood has had with books.  I mean, there’s a whole Oscar category dedicated to “Adapted Screenplay.”  And many bookstores devote whole tables or shelves to “tie-ins” – those titles that bear the “Now a Major Motion Picture” banner across their covers.

But what does all this have to do with me, you may ask?

No, I’m not going to tell you to write a bestseller and hope to sell the film & TV rights for six or seven figures (although that’s certainly something to dream about).  The point I want to make here is that books can be big business for the entertainment industry – as a result, there is a whole army of people working behind the scenes in film and television who read books and get paid for it.

More specifically, as Director of Development for the production company Original Media, my job is to find projects for my company to produce and figure out how best to sell them to television networks.  Many of the projects we are developing started with underlying literary material: books, articles, and plays.  Which means that a good portion of my work life is spent finding and reading books we might want to option.

Ten years ago, when I was starting out as a newly declared English major at Ball State, I had no idea that this is where I would end up.  I didn’t really have a defined career plan, and I rarely entertained the notion that I would “do” something with my degree.  I decided to major in English for one simple reason: I love to read.  And I figured that it would be my only chance to spend four solid years reading books.

That’s not to say I didn’t have ideas about what I wanted to do as a profession.  In fact, I started out at Ball State in the Telecommunications department, because part of me has always wanted to work in television.  I love TV almost as much as I love books.  I retained TCOM as a minor, but by the end of my freshman year I realized that I wanted to take advantage of my time in college to pursue the liberal arts.  I knew majoring in English (and eventually also in History) wouldn’t “prepare” me for a specific career, per se, unless I wanted to go into academia.  But I’m a firm believer that there is incredible value in the skills you get from concentrated study centered on reading, writing, and debating.  (Anyway, Oxford agrees with me.)

As it turns out, these are skills I use on a daily basis: I read, I write about what I read, and I try to convince people (my bosses, agents, writers, or network executives) that what I’m reading is worth investing time or money in.  Additionally, I research the current entertainment landscape to see what’s been done and what’s being done, what’s working and what’s not.  I think strategically about how to package and pitch our projects, and I analyze new ideas to assess how they might (or might not) fit into the marketplace.  In short, I regularly rely on my critical thinking abilities.

It’s challenging work at times – you have to read a lot of bad to get to the good, for one thing – but I’ve had a lot of practice thinking critically about content.  From my internship to my work as an assistant and now a development executive, reading and evaluating material has been a significant aspect of my career thus far, and it all started back in the classrooms at Ball State.  So while there might not be a direct link between majoring in English and working in television development, I feel that my education set the stage for me to succeed in this profession.

Plus, it’s nice to know that there are lots of ways to work with books, even if you don’t want to write or publish them.  Neither of those options ever appealed much to me, so I feel pretty fortunate to have found a niche in the professional world that blends my love of books with my love of TV.  My particular job isn’t the only one that does: the entertainment industry, for one, also relies on readers (for scripts and books), book scouts who track the publishing world for their clients, and book-to-film agents who negotiate deals like the one just made for Fifty Shades of Grey.

And if you’re not all that concerned with whether your job description includes “reading novels,” there’s other work in entertainment for people with a liberal arts background.  It’s all about telling stories, and isn’t that in some way the essence of what drew us to the major in the first place?  Plenty of the producers and writers I know studied English.  It provides a solid foundation in storytelling.

So, like my fellow alumni who have posted here, I encourage you to think outside of the box.  Your English degree can take you many places.  The skills and knowledge you have now may not translate into a career as obviously as, say, a degree from the Teacher’s College, but that’s part of the fun. You get to decide what they do for you.

Now, I’m off to find the next Hunger Games.  Just like the rest of Hollywood…

Connect with Lydia Storie on LinkedIn.