Almost 2,000 years ago, American Indians built the largest geometric earthworks complex in the world. These large earthen monuments demonstrate the sophisticated achievements and knowledge in the fields of astronomy, art, math, and engineering by ancient American Indians inhabiting the region from A.D. 1 to 400.  Spread across four miles in what is now present-day Newark, Ohio, these impressive mounds and walls are constructed to record significant celestial alignments on the landscape, including the 18.6-year lunar cycle. The earthworks created community for the Hopewellian people and provided sacred spaces for religious rituals and ceremonies related to their society.

Since the early 1800’s, archeologist have studied, measured, and described the unique architecture. Over the span of time, overgrowth, farming, urban development took over and some of the mounds were lost. However, two of the main parts of the earthworks survived, mainly due to their ability to host entertainment. The Great Circle was home to the Licking County Fairgrounds from 1854 to 1933. The Octagon was an encampment for the Ohio State Militia until around 1910 when it was leased to a private golf course, which remains there today. 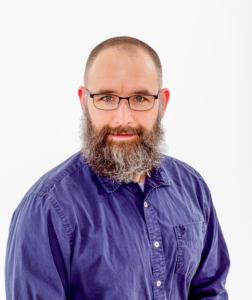 Dr. Kevin Nolan received a $99,996 award from the National Endowment for the Humanities (NEH) Digital Humanities Advancement Grant to develop and test a prototype of an interactive three-dimensional simulation of the Newark Earthworks.

In today’s world, science and technology allow us to both see into the past and preserve it for the future. Kevin Nolan, Director and Senior Archaeologist in the Applied Anthropology Laboratories (AAL) in the Department of Anthropology and John Fillwalk (co-project director) Senior Director of Hybrid Design Technologies in the Office of Information Technology, both at Ball State University, received a $99,996 award from the National Endowment for the Humanities (NEH) Digital Humanities Advancement Grant to develop and test a prototype of an interactive three-dimensional simulation of the Newark Earthworks.

The project is a collaboration between the AAL, the Ohio History Connection, the Institute for Digital Intermedia Arts (IDIA Lab) at Ball State, and with support and partnership from several federally recognized American Indian tribes, including the Eastern Shawnee Tribe of Oklahoma and the Shawnee Tribe.

Chief Glenna Wallace of the Eastern Shawnee Tribe of Oklahoma expressed her support for the project by sharing how it will reconnect her tribe with their Ohio homelands and stories from the past. A tribe once established in southern Ohio, they were forcibly removed in 1832 and relocated to Oklahoma. She states, “This project offers the possibility of gain by bringing the Newark Earthworks Octagon to our tribe’s people…the possibility of “winding back the sky” so we can see how these sacred earthworks and the heaves have danced together across these past 2,000 years…the possibility for us to see, and dwell in, and ask questions about these places honored by our ancestors.”

Dr. Kevin Nolan commented on the scope of the project, sharing “We will create a virtual world around the earthworks, reversing erosion to approximate original height, remove all modern construction and populate with one or more potential vegetation communities (forest, prairie, etc.). Then the sky will be added with accurate celestial bodies to allow people to view the stars, planets, moon, sun as they were 2000 years ago (there is minor, but noticeable movement over centuries) to be able to experience the alignments as they were intended by the builders.”

The National Foundation on the Arts and the Humanities Act of 1965 created the National Endowment for the Humanities as an independent federal agency. The law identified the need for a national cultural agency that would preserve America’s rich history and cultural heritage, and encourage and support scholarship and innovation in history, archaeology, philosophy, literature, and other humanities disciplines. It is one of the largest funders of humanities programs in the United States. You can learn more about the work of the NEH by visiting here. You can see the full list of awardees by visiting here.