“Unity Week aims to challenge perspectives on matters of diversity, inclusivity, and solidarity in an evolving social climate.”

Since 1980, it’s done just that. For 40 years, Unity Week has remained dedicated to unifying the Ball State community through enlightening social, cultural, and educational events. To celebrate this momentous anniversary, we delved into the Digital Media Repository to catalog some notable Unity Week moments since its founding here at Ball State. To read more about the Unity Weeks listed below, click on the clipping to view the full article. 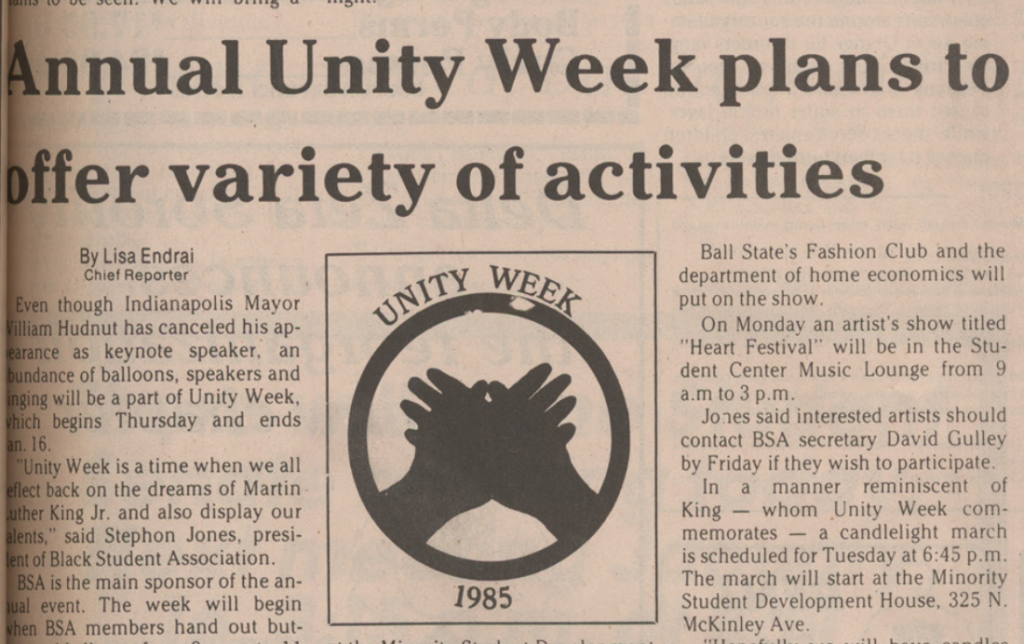 “Unity Week is a time when we all reflect back on the dreams of Martin Luther King Jr. and also display our talents.”

Five years after becoming an official Ball State event, Unity Week was widely popular. So popular, in fact, that Stephon Jones, President of the Black Student Association, asked people to sign up early if they could so he and his team could get an idea of how many people to expect. The place was packed the year before and they fully expected the same thing this year. The department of Home Economics and Ball State’s Fashion Club also hosted a fashion show this year. The article also points out that Unity Week’s Unity Fellowship was the first time all religious organizations on campus came together to host an event. Rev. Charles Williams, president of the Black Expo, spoke at Martin Luther King Jr.’s memorial service.

The spirit of this year’s Unity Week celebration was best encapsulated by this anecdote. Ball State Daily News shared a story of a Vivian Conley, a 66-year-old graduate student at the university. Conley helped found the Non-Traditional Student Association in 1985 and was an avid supporter of Unity Week events. Her involvement allowed her to work with students, whom she considered to be her grandchildren – one of them literally was. Junior Steven Johnson worked closely with Conley, his grandmother, to solicit support for a Unity Week candlelight march. The cross-generational collaboration stands as a testament to the spirit of the event. 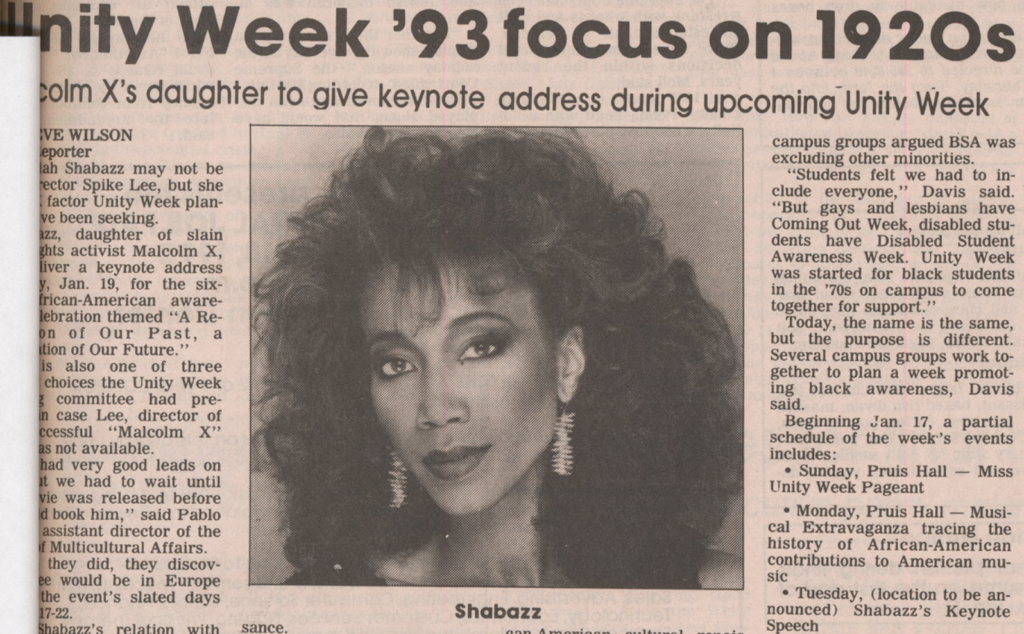 The theme of 1993’s Unity Week revolved around the Harlem Renaissance. Attallah Shabazz, Malcolm X’s daughter, came to deliver a keynote speech on the cultural boom. The speech, titled “Harlem Renaissance: A Celebration of our Past, A Reflection of our Future,” certainly set the tone for the year’s festivities. From a recreation of Harlem’s historic Cotton Club to a Spike Lee film festival, this year’s Unity Week celebrated African American art and culture throughout the ages.

“Don’t worry about who someone sleeps with, or what color their skin is. Just appreciate everyone’s differences and try to live more cohesively together.”
This quote from Mike Rivera, a member of the Latino Student Union, was the embodiment of this year’s theme: “A Uniquely American Deam.” With a pageant, Family Feud-esque game, and hunger banquet, events throughout the week celebrated differences within our student body.

The four years leading up to 2015’s Unity Week saw student participation increasing tenfold. With a far larger audience, this Unity Week strived to change student perceptions of diversity, including race, religion and economic background. This week introduced Check Yourself, an event in which students were asked about their feelings towards diversity on campus. 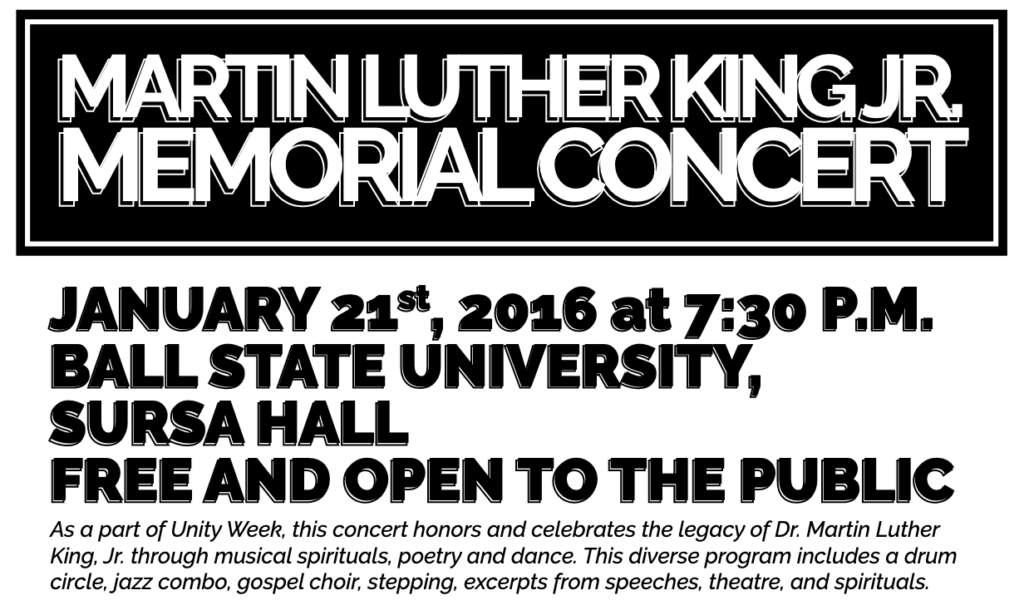 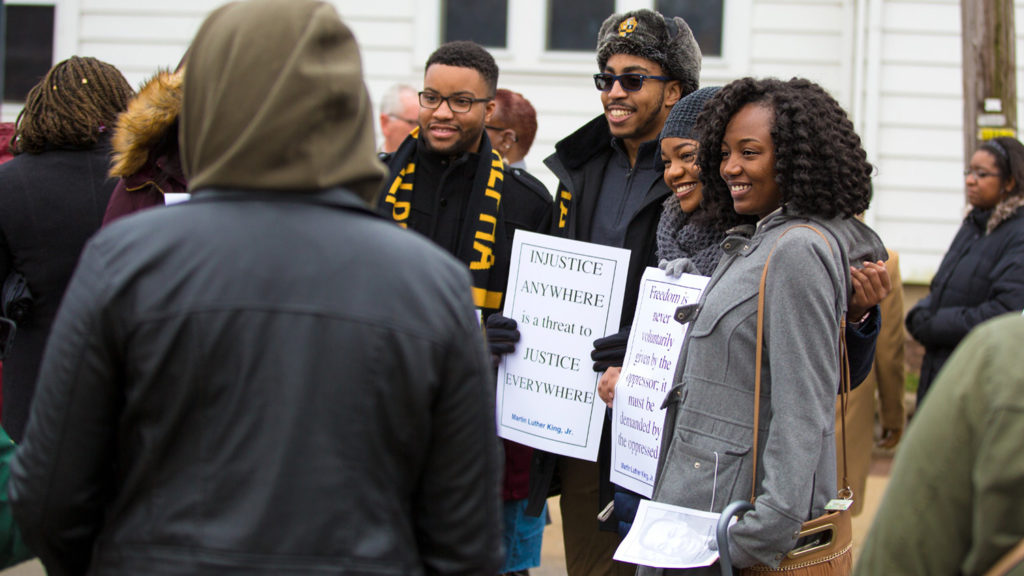 Looking to get involved in Ball State’s 40th Unity Week? Here’s the schedule of every event happening from January 20th to the 27th. This week of events was planned by student organization leaders and professional staff from across the university. All events are free and open to students, faculty, staff, and community members.