In a long academic career, it is common for a scholar’s interests to shift and change over time, dovetailing from one project to the next. Generally, a professor shifts their focus within a field to various topics. Which is why it is a refreshing surprise to talk to Dr. Jennifer Erickson, whose current research in Bosnia is the culmination of twenty years of personal and academic experiences. 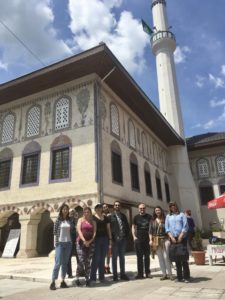 Students traveled to an unusually ornamented mosque in Travnik, which first opened in 1816 during the Ottoman Empire.

Bosnia is a country in Southeastern Europe, located East of Italy on the Balkan Peninsula. Bosnia has a long history of settlement and conflict, and the country has become a fascinating mixture of cultures. Bosnia has only recently become its own country in 1992 after the dissolution of Yugoslavia, which sparked the Bosnian War from 1992-1995. While this war devasted the country, the country has been recovering through its growing tourism industry. Though as Dr. Erickson’s research shows, under this surface Bosnia is still struggling from the lasting effects of the war and foreign capitalist influences.

In 1997, Jennifer Erickson had a bachelor’s degree and a desire to immerse herself in another culture. She signed up for a program that connected her with a local Bosnian women’s organization that provided women with resources, both economical and health-related services. Participating in that program was a crucial turning point for Erickson, who conducted a research project on the prevalence of domestic violence among Romani (also known as Roma or Gypsy) women. It was this project that motivated Erickson to put her academic skills and experience to use for social justice. She spent 2 years in Bosnia, immersing herself in the language and culture while working to change the community’s views on the Roma population in a post war landscape.

Inspired by the social justice work she did in Bosnia, Erickson returned to the United States and got involved helping Bosnian refugees in North and South Dakota navigate government social services. After briefly returning to Bosnia for research for her master’s degree, Erickson decided to do her PhD research as  a comparative study of Bosnian and Southern Sudanese refugees in Fargo, North Dakota. Her research examined the relationship between resettlement of these groups of refugees and the welfare agencies, soon to be published as Race-ing Fargo: Refugees and the Transformation of Small Cities (2020, Cornell University Press). It is about the dual impact of the refugees on Fargo and Fargo on the refugees.

Recently Dr. Erickson has been working on a comparative study of two post-industrial cities: Muncie and Zenica, Bosnia. Dr. Erickson’s initial study was conducted in the Riverside/Normal City neighborhood of Muncie in 2016. Building on the historic Middletown studies, Erickson led a team of students on an ethnographic study of the area. The students did an interdisciplinary analysis of the neighborhood to trace the history of the neighborhood and its change over time.

In the summer of 2019, Dr. Erickson took a group of students to Bosnia for the other side of the comparison. She took the students to three different cities, encouraged them to be immersed in the culture, and concentrated on the post-industrial nature of the city. The students would conduct ethnographic research in groups and individually, exploring the cities and meeting with local residents their own age. They focused on noticing the architecture and textures of the cities, the different sounds, smells, and cultures that all converge in Bosnia. 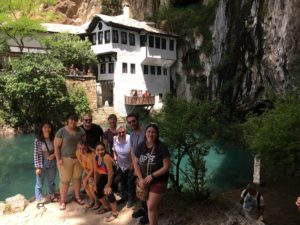 Students enjoyed the view of the old Dervish Monastery and cave in Blagaj.

Dr. Erickson is currently working on securing funding to complete her comparative study of Muncie and Zenica. While Bosnia as a whole has been recovering from the war and promoting tourism, Zenica has been plagued by outside capitalist interest. There is heavy pollution from a steel factory and a movement of ethno-nationalism that threatens the culturally diverse nature of the country. Both of the cities have a heavy factory presence that influences the society, they both have a significant majority ethnicity that holds sway over the minorities, and political corruption. Whereas Muncie is representative of a typical American city, Erickson calls Zenica the “Middletown of Bosnia.”

Dr. Erickson’s impressive career is defined by her use of her academic knowledge and resources for social justice programs. She can trace it all back to Bosnia and reflecting on her upcoming book she is amazed that, “it’s 20 years in the making.” Erickson has frequently visited the friends that she made in Bosnia and is looking forward to going back.

Dr. Erickson is a an associate professor of Anthropology and assistant chair of the department. If you are interested in ethnographic research or immersing yourself in other cultures, reach out to her!