In the wood-paneled offices of the Cooper Science building, new biology faculty member Douglas Roossien has made himself right at home. Several Funko figures and a few personal decorations dot the office as he showed me the fascinating brain scans of a fruit fly, the subject of his research about the systems of serotonin in the brain. In the interview below Dr. Roossien describes the cutting-edge tools and experience that he brings to Ball State as well as his plans for getting students heavily involved in his research.

What brought you to Ball State? 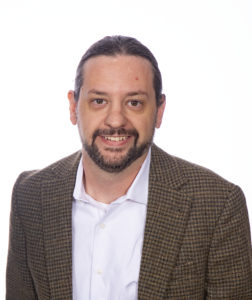 Dr. Douglas Roossien is the newest faculty member in the Department of Biology.

I grew up in the Detroit area. I did my undergrad on the west side of the state, then did my PhD at Michigan State, and lastly my post-doc at University of Michigan. I sort of moved slowly from west to east on the academic path there.

I was a post-doctoral fellow at the University of Michigan for five years, I worked in a lab where we were very focused on developing new genetic and molecular tools for studying the brain. It was very exciting but also high risk/high reward. It put me at the cutting edge of the field for a few years and I learned a lot of new technical skills and new ways of thinking about life-science research. It allowed me further my passion, or maybe obsession is a better word, for microscopes and different kinds of advanced microscopy. I got to do a lot of cool things, we developed some new tools for studying the brain in a lot of different contexts and got to make a lot of 3-dimensional brain reconstructions in the mouse and the fruit fly.

What is your research focus?

In the last lab the focus was more of an engineering, making new tools to further the broader conquest of understanding the brain. So now one of my goals is to take the new tools that we were developing and work on applying those to biological research questions.

I have a lot of liberty in terms of what I want to pursue because I don’t have a discreet focus. The more specific thing that I am interested in is taking these tools that I have used and applying them to the development of a specific set of neurons, called serotonergic neurons in the brain. These are neurons that produce the neuro-transmitter serotonin. In terms of function they regulate a lot of behavioral paradigms of mood, appetite, sleep, memory, and even higher cognition. There is a lot of correlative evidence that these anatomical circuits are malformed in many behavioral disorders. My sort of broader question is what are the mechanism that arise or that result in these structural abnormalities. So, I’m using the tools that I developed to answer that question.

It’s a bit open-ended, we have some specific hypotheses. The tools we have developed allow us to look in a new way. Even if our hypotheses are all incorrect, we will be looking at the brain structure in a new way so there are probably new things we are going to learn even if our ideas are incorrect.

All of this work will start on the fruit fly model organism. There are a lot of genetic tools we have to manipulate the fruit fly in a cost-effective, timely fashion. It’s a very useful system to start to boost a research program and to get undergraduates involved in the research.

Speaking of students, what are some of your goals for your first year teaching here?

We run a fruit fly lab for the research and a major part of running that lab is keeping your flies happy and healthy and growing. Doing a lot of genetic mating schemes to get the flies that you want. So, my first goal was to just get the fly lab up and running. By that I mean cooking the fly food, getting the stations set up where we can anesthetize the flies so we can sort them by male and females, and other marker mutations that we use to track genes. Basically, we need to be able to sort through flies. So, the first two months since I have been here has been getting all of that equipment gathered and set up so that we can keep the flies happy. So just recently I finally had everything come together and had my first two students come in and we cooked our first batch of fly food.

One of the things that really attracted me to Ball State was the ability to be heavily involved in teaching and research with undergraduate and graduate students.

My larger goal for the first year is to have four to five students in the lab, trained enough to have their hands busy. The hope is that once I get a few students up and running and comfortable with a lot of the fly genetics and keeping the flies alive and we do brain dissections and various studies. My goal for the first year is have enough a cohort of students that can be involved in training the following cohort.

What sort of larger impact do you hope your research will have? 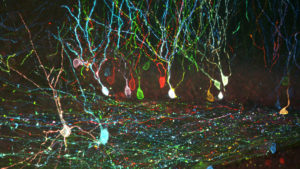 The image above shows the close interactions between the cable-like axons of serotonergic neurons as they cross the midline of the Drosophila central nervous system.

One of the larger, collaborative, long term goals is to have a better understanding of the manipulations, specifically serotonin, of these systems in the brain. Human individuals perform pharmacological manipulation of these systems all the time: SSRIs (selective serotonin reuptake inhibitors) and prosaic are just two examples. We prescribe these things all the time and quite frankly we don’t really know what they are doing. We know that they can produce a change in behavior to a certain extent under certain conditions. And we know that some individuals respond well, and some don’t. But we are just beginning to collect evidence that there are some structural differences in the brain between those two groups. So the question is: why? Why do those structural differences cause difference in responses and how do those differences actually arise?

The hope is that we can start to understand how these things correlate to functions and structural abnormalities that we see in the brain so that we can get a better understanding of behavioral disorder. What I want to do is to bring in behavioral assays into these anatomical projects. Creating a wholistic understanding of how disruption of a particular gene, during a specific developmental time window, leads to a certain anatomical abnormality which then leads to this behavioral abnormality. That’s goal of how to bring all these together to produce change in real people’s lives.

Visit our post on Dr. Rob Haney, meet the other newest faculty member in the biology department.