In the fall of 2012, BSU undergraduate student, Marcus Bingham, took a seat on an airplane for the first time in his life. This small-town boy from New Madison, OH, flew to London to begin the most critical part of his academic journey. Coming from a high school with a graduating class of 52 classmates, he never imagined that he would be comfortable in the relatively small city of Muncie, Indiana, let alone a city of 8.9 million people. Marcus had selected BSU as a freshman in an attempt to leave the “bubble” of his small town, soon discovering an intense interest in international politics.

Dr. Kelly Kirkwood in the Rinker Center’s Study Abroad Office helped him realize that his lifelong dream of visiting England was just within his grasp. For him, the most life-changing element of his undergraduate year abroad turned out to be the community he developed along the way. He found a community of like-minded individuals who were focused on deep thinking, higher education, and cultural learning. This left a lasting impression on Marcus, and he attributes this time to helping him become the person he is today. 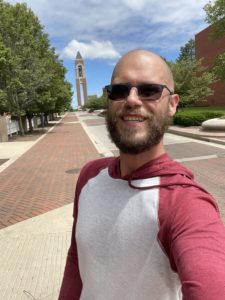 As the end of his year abroad approached, he recognized that he needed to do anything in his power to ensure his immediate return. Marcus applied to Keele University to pursue an M.S. degree in Politics and International Studies. He established a similar community around himself again. However, Marcus served more as the mentor than the mentee this time around. While pursuing his master’s degree, he mentored undergraduate U.S. students who enjoyed, but also struggled with adjusting to a new way of life.

After successfully obtaining his degree, Marcus returned to Indiana and found a job as an Academic Advisor at Indiana University East. When reflecting on how his experiences abroad prepared him for his new career, he shared that studying abroad made him want to be what Kelly Kirkwood was to him—someone who sought to show students what university and the world had to offer them. Marcus plans to return to work in the field of politics one day. For now, he is content with his current role of guiding students out of their comfort zone by encouraging them to grow in unfamiliar places, surrounded by different people and learning experiences.

Marcus had fulfilled his dream of living and studying in the United Kingdom. While chasing this dream, he began to fully understand his place in the world. He remarked, “Studying in England truly made me who I am today.” He found that this experience was extremely humbling, while helping him build his cultural awareness and perspective-building skills. Marcus observed that learning and experiencing both Western and Eastern cultures was the most crucial reward he took away from his time abroad. He reflected that his experience abroad was self-actualizing; and that in fulfilling his dreams, he found his purpose.