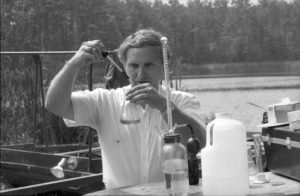 Distinguished Professor Emeritus of Biology, Dr. Tom McComish, served Ball State and its students for 32 years as a scholar, leader, mentor, and friend. He began at the university as both a teacher and researcher with a passion for aquatic biology, a program that Ball State did not yet have. Through tenacity and vision for the department of Biology’s future, McComish started both the Aquatic Biology and Fisheries programs that soon became highly regarded throughout the country.  Both programs thrive at Ball State today with the generous support of Dr. McComish and his wife, Carol, who established a scholarship in 2016 for Ball State University students pursuing an aquatic biology and fisheries degree and were instrumental in funding the new aquatics suite in the state-of-the-art Foundational Sciences Building.

The Start of His Story

As a little boy who spent countless hours fishing and hunting, Dr. McComish’s passion for aquatics began alongside his father in the South Dakota outdoors. He learned about pollution and how it threatened a lake’s health as his father wove awareness into their casual conversations on the 10,000 acre lake near his home. Later he and his father attended Conservation Club meetings that furthered his knowledge and sparked a desire to pursue these topics in higher education.

Drawn to their aquatic sciences and fisheries programs, he attended South Dakota State University for his undergraduate degree and then stayed on to pursue his master’s because of their excellent biology program. He also worked at the South Dakota state parks and helped run a local fish hatchery during that time. While he recalls learning self-discipline and strong study habits as a busy, working student, he never found the academic demands incredibly difficult due to his love for the subject. “If anything, there was too much I wanted to learn,” McComish said.  Indeed, he even had time for love. While working as both student and employee, he met the love of his life, Carol, who soon became his wife. 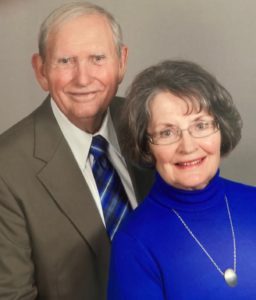 After finishing his master’s degree, McComish was inspired to pursue a Ph.D. by seeing the work of his professors and a desire to meaningfully contribute to the field of Aquatic Biology himself. At the recommendations of his professors, he applied to University of Missouri, where he was given the funding, research experience, and excellent scholarship he sought. After four years in Columbia, Missouri, he graduated with his Ph.D. and welcomed his first child, Steven.

Following graduation, he began looking for a position at a university that would grant him the ability to not only conduct research in his field, but also teach and build relationships with students similar to those that had been so impactful in his own academic journey.

Many of the universities he interviewed at did not have this type of position available, but Ball State did. At first, he assumed that working at Ball State might be a stopover on his journey to a larger university, but Dr. McComish quickly fell in love with the campus and Muncie, and ended up staying for 32 years. Ball State offered the support he needed and commissioned him to begin the Aquatic Biology and Fisheries program.

With excitement at the endorsement of the university, Dr. McComish began to build what would soon become a nationally recognized Bachelor’s degree program in aquatic biology and fisheries. He loved working with students, which he found to be one of the most rewarding aspects of his work. As a testament to the strong bonds he and his wife formed with BSU students during their time here, Dr. McComish’s students gifted him a fishing trip upon his retirement.

The Ball State campus was not the only place where Dr. McComish made an impact. After the Aquatic biology and Fisheries programs were developed here, the U. S. Department of Natural Resources asked Dr. McComish to begin doing research on the Great Lakes. as a result, Dr. McComish built another new program on Lake Michigan, giving BSU students research opportunities and attracting students from all over the country. Additionally, he conducted a project with the U.S. Forest Service, working with ponds in forests and focusing on the lives of bluegills, which was his Ph.D. emphasis. This was made possible through the support of Ball State, its students, and other faculty and staff.

Looking Toward a Bright Future 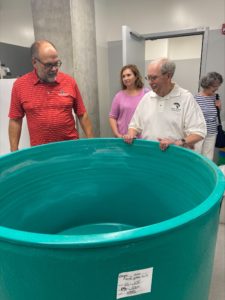 Dr. McComish and Carol recently visited Ball State’s campus to tour the new Foundational Sciences Building and see the brand new Tom McComish Aquatic Biology and Fisheries Suite, funded by their continued generous giving. Along the tour, they stopped to admire the equipment and views on each floor. Greatly impressed, Dr. McComish said, “Ball State is set for the next 100 years!” He is particularly excited for the opportunities and growth that this building will provide for aquatics research. As he envisions the future of these programs, he would love to see them seek funding for more research, an important part of a bright future for Ball State. Additionally, he hopes that a Saltwater Biology program would someday be developed here at BSU to enrich the Aquatic Biology and Fisheries programs. “There is not a program like this in the Midwest, and this could help connect Ball State programs with other institutions, such as the University of Florida or Mississippi State, which would provide students with wonderful opportunities,” McComish said.

Dr. McComish expressed delight in Ball State’s continued investment in the programs he was instrumental in creating, and he hopes they continue to grow. With the construction of the new Foundational Sciences Building, he is anticipates Ball State’s reputation of academic excellence will be further elevated and that more students will be encouraged to enter the field.

“The sky is the limit. If you dream about things, you can make them happen, you just have to figure out how. Ball State has a good reputation and they have worked hard to keep that reputation, so I suspect that the future is very bright for Ball State students and faculty,” McComish said.

Because of the generosity of the Tom McComish family and their support of Ball State, we look forward to what the next 100 years will bring in the Aquatic Biology and Fisheries program and how the new facilities continue to inspire the next generation of students and scholars.