A Ball State student has flown where no cardinal has gone before: Mars.

Earlier this year, Abdul Elnajdi, a Ph.D. student in the Environmental Science Program, spent two weeks at the Mars Desert Research Station in Utah. The research station is founded and funded by the Mars Society, a non-profit US-based international organization devoted to sending humans to colonize Mars. The station hosts highly qualified teams of researchers year-round to develop new technologies and solutions for human space exploration. 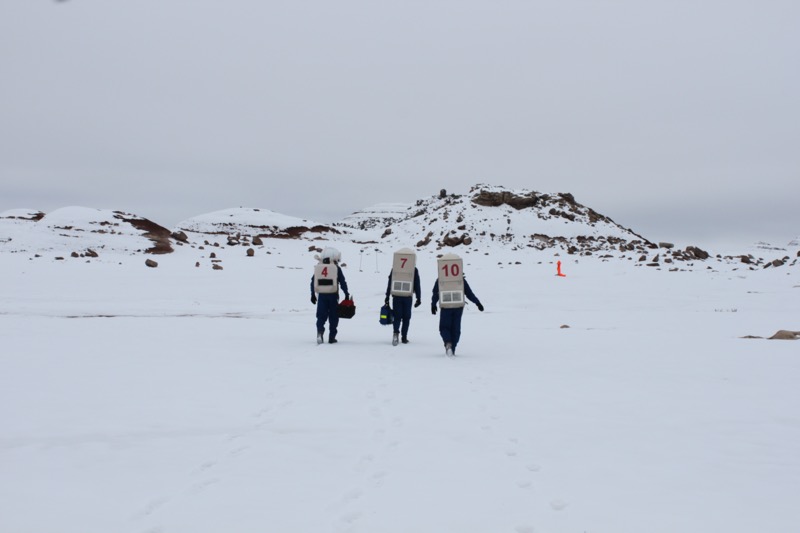 Born in Libya, Abdul has always held two passions: space and the environment. As a child, he attended space camps, gazed at the stars through telescopes, and attended various astronomy organizations.

But over time his gaze shifted back to Earth, where he saw a growing need for quick action to curb climate change. When he was 25 years old he was one of the founding members of the Arab Youth Climate Movement (AYCM), a non-profit group that works to motivate youth across the Middle East and North Africa for climate change activism.

In 2016 Abdul got accepted to the Florida Institute of Technology to pursue a master’s degree in Biochemistry. His research focused on studying the effects of plants in a simulant soil known as JSC Mars-1. This specific simulant is a substance meant to replicate the soil on Mars. It was created and widely distributed by the Johnson Space Center for students and scientists to use for research. By studying and performing experiments on this simulant, scientists can begin to understand the challenges and opportunities of colonizing Mars.

For his MA thesis, Abdul cooperated with the Astrobiology Research and Education Society at the Florida Institute of Technology to grow tomatoes and other plants in the JSC simulant under the same conditions which they would grow on Mars. His research tested to see what chemical changes would occur in the Mars soil when colonists started to grow plants.

Suiting Up at the Research Station

Because of his research, shortly after he graduated the Astrobiology Research and Education Society at the Florida Institute of Technology reached out to Abdul to offer him the position of Geologist on Crew 219 going to the Mars Desert Research Station in Utah. 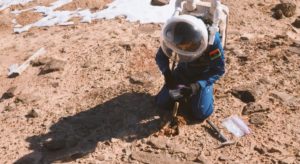 It took about six months for the team to write the proposal that would describe the various research projects they would perform, including human exploration, dust mitigation, and UAV surfing. While these research projects are not groundbreaking on their own, there is one element that makes Abdul’s crew completely unique from all other research teams: they conducted all of their research in strict simulation. They lived and worked for two weeks in the exact way a colonist on Mars would have to live.

“We lived inside the station. For two weeks we were not allowed to go outside till we suited up in spacesuits. We had to stick to a specific schedule, food was carefully rationed, and we had a specific amount of water we were allowed. Only one shower for the whole two weeks. Our behavior was studied to see how we handled the simulation. It was a lot of pressure for two weeks.”

The simulation was taken seriously, and if the team broke any of the protocols then the research would have to be discarded. For example, in a spacesuit on Mars an individual would have a limited amount of oxygen to survive and thus could only be outside of the habitation module for a short time. During Abdul’s simulation, if any of the team was outside longer than that allotted time then they would have to discard whatever research they had done at that time and start over the next day. 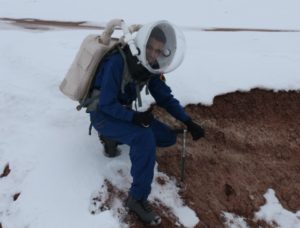 As Geologist for the team, it was Abdul’s responsibility to collect samples of the soil at the station. Unlike some of the other members of the team, the bulk of Abdul’s research takes place after the simulation is over.

Now back at Ball State, Abdul is working with Dr. Carolyn Dowling in the Environment, Geology, and Natural Resources (EGNR) department to analyze the simulant Mars soil from the station to determine what minerals are in the simulant soil, and then compare that number with the data being gathered by the rovers on Mars of the actual Mars soil. His research helps to ensure that the simulated soil remains consistent with our knowledge of Mars’ soil.

Though his research may not be the one that allows us to grow plants on Mars, Abdul’s work contributes to a growing body of scholarship about Mars soil. He argues that it is vital for scientists to keep studying Mars soil and attempting to find ways to make it cultivatable:

“If we can find a way to do it, that’s easy and not expensive, imagine how many places on the Earth we could use the same process and make the soil useful for agriculture.”

As both a space-loving scientist and a climate activist, Abdul is one of our cardinals working diligently to make the world a better place.

Abdul is currently working with the EGNR department and the Physics department to propose the idea of Ball State sending its own team to the Mars Desert Research Station in Utah. To read more about exciting student research, check out Emma Cieslik’s research on Jewish identity in Muncie.