There is only one synagogue in Muncie. There are over fifty Christian churches.

This begs the question, what is life like in Muncie for someone who identifies as Jewish? This is what CSH student Emma Cieslik and Anthropology faculty Dr. Robert Phillips set out to answer in their study on antisemitism and Jewish identity in Muncie.

Diving Into the Archives 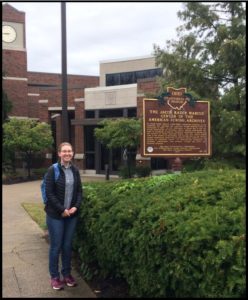 Emma Cieslik is a Junior in the Honors college double majoring in Biology and History. In Spring 2019 she began working as an anthropology research assistant to Dr. Phillips, who asked her to use her historical background to do archival research on Jewish individuals in Muncie in the twentieth century.

Emma did extensive research in the Martin D. Schwartz Collection in the Ball State archives, which contains Ball State Professor Emeritus Dr. Warren Vander Hill’s Jewish Oral History Project for Muncie. By researching this collection, Emma and Dr. Phillips obtained deep historical information about the lives of Jewish individuals in Muncie. But once she started exploring the topic, she did not want to stop there.

Having learned during the historical survey that there was a history of antisemitism in Indiana, Emma had to know more, “The research that we found indicated that Indiana has a history of entrenched presence of the KKK and domestic violence against minority groups.” She wondered if this were still true today, which is when she turned her attention to Muncie. Being from Chicago, Emma is used to large Jewish neighborhoods and was surprised to find a much different situation in Muncie, “A lot of people don’t know what Judaism is or that Jewish individuals live here, go to school here, and teach here.” This led her to wonder what it was like to identify as Jewish in Muncie in the twenty-first century. 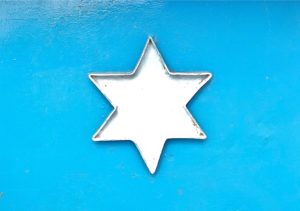 Junior Emma Cieslik set out to investigate: What is life like in Muncie for someone who identifies as Jewish?

At the end of Spring 2019, Emma approached Dr. Phillips about setting up an Honors Undergraduate Fellowship to continue the project. He agreed, and they created an ethnographic research project interviewing Ball State students, faculty, and Muncie community members who identify as Jewish. Dr. Phillips has a background in both religious studies and ethnographic research, and Emma had previously worked on Professor Emeritus Dr. Doyle’s Oral History Project.

In Fall 2019 Emma selected and contacted a list of people to interview for the project, and she conducted the interviews over the course of the semester. She structured the interviews by providing some general questions to kickstart the conversation, generally starting with ‘Do you identify as Jewish?’ While this may seem like a counterintuitive starting point, Emma was aware of the complexities of identification, “A lot of people say, ‘Well I’m culturally Jewish because I come from a family background of Ashkenazi Jews’ or ‘I’m religious Jewish, as is my family in Pittsburgh.’ But some people come from a family background where they might still identify as Jewish but not culturally or religiously.”

When trying to understand Jewish identification specifically in Muncie, Emma started by asking about kosher food networks, resources, and the fact that there is only one Reform synagogue here in Muncie – so do they identify as a Reform, Conservative, or Orthodox Jew? For those unfamiliar with Judaism, it would be as if there was only one Catholic church in Muncie and no Protestant or Greek Orthodox churches. All are Christian churches, but the specifics of their beliefs and practices vary widely.

The final stage of the interviews focused on more difficult questions: Have you ever felt emotionally or physically threatened as a result of your Jewish identity, has your Jewish identity affected your ability to succeed, how has the current American leadership, in both political parties, affected your Jewish identity, and have you encountered any holocaust jokes? While that last question may strike you as odd, you might take the time to consider the popular game Cards Against Humanities and the SNL debacle a few years ago. Even when the jokes are not to that extreme, Emma discovered that offensive Jewish jokes about physical appearance or money were unfortunately all too common, “One of the things that popped up in the interviews was the idea of Jewish jokes in culture. That pops up a lot when people aren’t familiar with Jewish individuals or don’t know that they’re around them.”

These revelations about what it is like to be Jewish in a small city with one synagogue, and the prevalence of many forms of antisemitism, are important and relevant for today. Dr. Phillips argues that their research is especially important in Indiana because “there have been increasing incidences of antisemitism nationally as well as locally, including the recent desecration of a synagogue in Carmel and antisemitic flyers posted at the Jewish Federation in Indianapolis [last fall].”

Currently, Emma and Dr. Phillips are comparing the historical research with the interviews to chart small-town Jewish identification in the twentieth and twenty-first centuries. The end result will be two academic articles for publication and hopefully a community that has a greater awareness of the vast variety of individuals who make it what it is.

You can learn more about the Middletown Studies by visiting here and here.