The Middletown Projects are the culmination of HIST 200: Introduction to History and Historical Methods. They build on Felsenstein and Connolly’s What Middletown Read by using materials from Ball State University’s Archives and Special Collections. These projects reveal the foundational disciplinary skills used by historians, and as such are an excellent example of what the history major cultivates in students. The following projects were produced in Spring 2019, and provide a fascinating glimpse at Muncie throughout the late 19th / early 20th centuries. 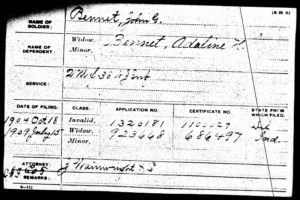 Civil War Veterans in Muncie, Indiana (1870-1910) is a blog created by Amber Maxwell that explores the issues related to disabilities gained through the American Civil War (1861-65), using case studies of Muncie veterans. This blog investigates the experiences of veterans and the growing discipline of disability studies, as well as pension programs for disabled veterans. However, the lack of detail in the pension index made a localized Muncie investigation difficult. Fortunately, Amber was able to overcome this obstacle using practices she learned throughout her major:

“I overcame this by using the information I did have – secondary sources and specific information for two different Muncie soldiers – and generalized it to the best of my ability to the Muncie veteran population as a whole.”

The “Oldest Profession” in Muncie 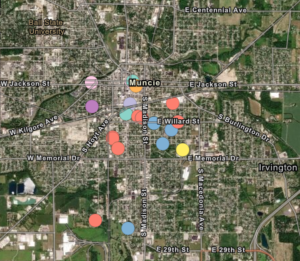 The Middletown Prostitution Project explores the presence of prostitutes in Muncie from 1870-1910. Sophia Hoffert and Claire Enk created a podcast and a StoryMaps project exploring this subject. By using an interactive map, the project is able to contextualize a long-gone era with roads we drive every day. Moreover, this project uproots the Protestant misconceptions of the history of our city:

“Being a mainly white Protestant town, we assumed that the occupational character of the city would be purely reflective of the Christian, high academic, and cosmopolitan values that the city’s promoters stated about it. Prostitution seemed more like an institution that would exist out in wild west towns, along with saloons and shootouts, but the so-called “oldest occupation” was alive and well in Muncie, Indiana between 1870-1910.” 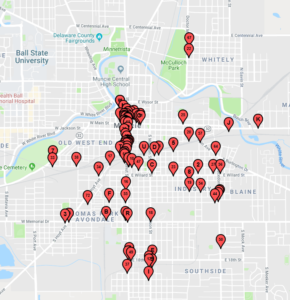 With each point marking a saloon, it’s easy to see which parts of Muncie changed the most as a result of the gas boom.

The Middletown Saloons Project explores alcohol consumption in Muncie from 1870-1910. John Williams and Cristian Patino created two podcasts and a map exploring these topics, as well as a “behind the scenes” podcast that revealed their journey through this project from idea to question to archive to production. John and Cristian’s work provides a fascinating glimpse into the gas boom of Muncie by labeling every point of development our city underwent during its rapid expansion.

“Natural gas had been discovered in Muncie in 1886. This new source of wealth drew a large number of manufacturers to the area in a brief period of time, in what is known as the gas boom. Muncie was quickly transformed from a small town to a small industrial city within 15 years. To take advantage of the job opportunities that became available, industrial workers flooded in. In this time period, saloons were where these workers hung out.”