Daniel Gonzales earned his B.S. in Secondary Education from Ball State University in 2007 and his M.A. in Museum Studies from the University of Missouri-Saint Louis in the spring of 2010 as an E. Desmond Lee Fellow. Following graduation he began work as a researcher at the Missouri History Museum. In 2013, Daniel took on the position of Museum Curator with the St. Louis County Parks system eventually being promoted to Historian for St. Louis County. In 2018, he took the position of Director of Exhibitions Research at the Indiana Historical Society.

What does a typical day at work look like for you?

As Director of Exhibitions Research at the Indiana Historical Society, my day varies quite a bit depending on where we are in the development of any given exhibition. Early in the exhibit development process much of my time is spent in meetings discussing the broad vision for the exhibit and researching to understand the exhibition content. Later, most of my day is spent writing, identifying, and processing artifact loans, image, and video permissions, and working with our conservation department and fabrication team to determine display parameters, casework, and mounting needs. I also work with our IT staff to put together digital exhibit elements like videos, touch screens, and projection graphics.

Additionally, our exhibits involve actors portraying historical figures in recreated historical spaces, so I spend time determining how those spaces are going to look; identifying and acquiring props and furniture to populate the space and researching and writing character profiles for our actors to use.

During the fabrication and installation phase of the exhibit, my role is to assist our designer and fabricator in bringing the exhibit to life. This involves reviewing design elevations, consulting about how objects should be mounted and lit, installing artifacts, and then spending several weeks providing in-depth training to our actor/interpreters.

We are typically working on more than one exhibit at a time, so my day may be a combination of all these activities. I have a couple assistants to help me with research so my job also involves supervising and reviewing their work to ensure accuracy and consistency of language and tone. It makes for a busy, but dynamic day.

What’s your favorite thing about your job? 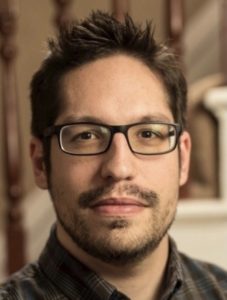 My favorite thing about my position at IHS is the creative and collaborative atmosphere here. The other staff in my department and around the museum are all very passionate about the exhibits we are putting together, and they each bring a unique skill set. I learn something new from them on every project we do.

What got you into history?

In high school I developed an interest in social issues and politics which led me to read the works of historical figures who had written about how society should be. I read Sir Thomas Moore’s Utopia, the speeches of Eugene Debs, and some writings of political philosophers, most influential being Rousseau and John Rawls. The more I tried to understand and think about how society could be improved the more I realized that historical context is an essential part of any discussion about society and how it works or should work. So, I started to read more history focusing on past social movements, particularly the American labor movement. I decided that when I got to Ball State, I was going to study history as part of my degree in Secondary Education.

What class are you glad you took while at Ball State, or helped the most with your career?

I took a class on Modern Latin American history that was really interesting. What I what I walked away with was this recognition that the broad narrative of history that we have created was not inclusive; it ignored major elements of the story, and in doing so was inaccurate. It underscored for me the work that remained to be done to broaden historical narratives, particularly at the secondary level and in public history.

What class do you wish you had taken?

I wish that I had taken a course that taught the process of academic publishing. Graduate school was the first time I attempted to get something published in an academic journal. The process was challenging and very different from the papers that I was writing for many of my history courses at Ball State.

What did the path from graduation to your current job look like? Did you get a job immediately?

I graduated from Ball State in 2007 and worked for a short period as a substitute teacher for Indianapolis Public Schools. In 2008, I moved to St. Louis to join the Museum Studies program at the University of Missouri St. Louis. As part of that program I worked on exhibitions and public programming at the Missouri Historical Society. They offered me a job after graduation in 2010 running their teen program Teens Make History. After a few years, I applied and got a job working as a curator with St. Louis County Parks Historic Sites. I traveled between three military history sites during my time there and was promoted to County Historian a few years later. In that position, I did a lot of historic preservation work, as well as a lot of writing, publishing, and presenting. After having children, my wife and I really wanted to move back to Indiana, so when my current position opened in Indianapolis we jumped at the opportunity.

What advice would you give history majors who are about to graduate?

I would say you should have a very good idea of what kind of work you want to do (academic, historic preservation, museums, etc..) and if possible volunteer or do internships in that area. You should also reach out to folks who have the kinds of jobs you want. Ask them to get coffee and ask them questions about how they got there. Jobs in the history field are competitive and specialized, so you will likely need more than just your degree to get the job you want.

If you’re interested in learning more about Daniel, you can connect with him on LinkedIn.

You can do anything with a humanities degree! Read more about opportunities for history majors by visiting these posts featuring Andrew Luce and Allison Tourville.