In July 2014, a strange craze swept the nation.  Celebrities, politicians, and everyday people took on the ALS Ice Bucket Challenge (IBC). Whether they were in professional suits, swimsuits, or shorts, challengers poured a bucket of ice or icecold water over their heads. If they weren’t that brave, they instead made a donation to the ALS Association.

The summer campaign brought new attention to a crippling and fatal neurological disease. ALS is also known as Lou Gehrig’s disease. The ALS Association raised $115 million that summer, and now researchers all over the country are reaping the benefits including Ball State’s Phil and Melissa Smaldino.

After arriving two years ago, the Smaldinos received a $50,000 starter grant from the ALS Association. “I did not have background in neuro degenerative disease or neuroscience,” said Phil Smaldino. “Two years ago, ALS wasn’t even on our radar, but the data led us there, so it made a lot of sense to pursue it.”

While the ALS Association, with the National Institutes of Health (NIH) and the Center for Disease Control (CDC), jointly fund $128 million of research, $18 million of that amount is from the 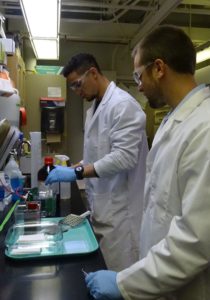 IBC. That’s according to ALS Indiana Chapter President Tina Kaetzel. Kaetzel said IBC dollars allowed the association to fund investigators like the Smaldinos who hadn’t previously researched ALS. “Neuro collaboration is one of the major research strategic initiatives that were made possible due to the ALS Ice Bucket Challenge.

That’s a key strategy that the national organization has taken.” The Smaldinos study one human protein that’s able to “untie knots” that form in our DNA. The “knots” are called G-quadruplexes. “When the knots are formed, the gene is turned off. When the knots are unwound by this  protein, the gene can be turned on. We specifically study it in a disease state where the process is disrupted.

So, we study the role of this protein which is able to untie the G-quadruplexes and how that may either help or make the disease worse,” said Phil Smaldino. Dr. Phil Smaldino’s background is cancer biology and Dr. Melissa Smaldino’s background is neuroscience. She previously researched epilepsy. As co-principal investigators, the two troubleshoot projects. As a part time researcher, Melissa manages the lab, works on grant-funded projects and analyzes data.

“I think we complement each other,” said Melissa Smaldino. “He has strengths that are my weaknesses and I have strengths that are his weaknesses. I stay at home with our children too, so it was our intention that we would work together on this project rather than applying for a position and having my own research lab.”

Because of their earlier research, Phil Smaldino said, it made sense to apply for an ALS starter grant, “It was a good fit for us because I had been studying this protein, and I was focused on studying G-quadruplexes and Melissa had the neuroscience background. There was a semirecent discovery that certain ALS cases were caused by an excess of G-quadruplexes. It was kind of a perfect grant for us. So we received that in 2017.”

I did not have background in neuro degenerative disease or neuroscience. Two years ago ALS wasn’t even on our radar but the data led us there, so it made a lot of sense to pursue it.” —Dr. Phil Smaldino

The grant helped employ seven students in the lab this past summer, whom Phil Smaldino called essential to the lab work. As a former Ball State master’s student, Melissa Smaldino understands that students need to be introduced to different types of research. “A lot of students will go into industry or get their PhD, so they need internships or opportunities in the department to get exposure to research. It is an invaluable experience for the students because without experience, it’s hard to get into PhD programs or industry positions now. It’s very competitive. This really sets students up well for future opportunities.”

Antoni Chambers, a native of Valparaiso, Indiana, is one of those students. He graduated in May with his master’s in biology. “I’ve learned a lot of technical skills with different protocols, also a lot of soft skills like critical thinking. I’ve also gotten a lot of professional development skills as well. I’ve been in quite a few leadership positions here. The master’s program has been especially valuable to me.”

“We’re very proud of them and all of their hard work, and as Phil said, without the students, the lab wouldn’t exist,” said Melissa Smaldino.

The Smaldinos’ starter grant is for one year with the option to apply for multiyear grants. They hope to publish and present the results with their students.