A WWE (World Wrestling Entertainment) Superstar performs and plays “I’m a little teapot” with his daughter. The television ad from the U.S. Government’s Administration for Children and Families encourages dads to take a moment to make a moment. The tagline “Take time to be a dad today” is an ongoing effort to get dads to play an active role in their children’s lives.

An all in dad

Former BSU basketball star Malik Perry didn’t need a commercial to tell him to be an involved dad.

“I’m one of those all in dads. I got to be all in. This is my first son, my first child, her first child.”

The now 30-year-old Perry worked as a social worker for Children’s Real Father Engagement of Indianapolis which offered two weeks paternity leave when Perry’s son Malikai Jamal was born a year ago. He didn’t hesitate to take it. “I just like bonding. They speak about the bonding time for a mother and son or mother and daughter and that skin to skin contact. I just felt I wanted that same bonding experience.”

That bonding experience between parent and child is important according to Ball State University sociology professor Dr. Richard Petts. “We’ve seen the shift over time, 20-30 years that fathers shouldn’t just be breadwinners, sort of 1950 Leave It To Beaver kind of family but share in the caregiving. Today it’s called “New Fatherhood” in the literature. The idea that fathers should be involved, they should be nurturing, they should be caring, they should want to spend time with their families and not just be the provider.”
Petts’ interest in this area grew from looking into Ball State’s paternity policy nearly five years ago. He learned then he could take a couple of days off for the birth of his son, but any more than that would require a note from his wife’s doctor. At the time, BSU didn’t have a family leave policy. That has since changed (see Behind the Story…). A lightbulb went off for Petts that this was his next project. In his preliminary research, he discovered no one had really looked into paternity leave here in the United States. He said he found only two studies. It snowballed from there. Petts received $160,000 from the Eunice Kennedy Shriver National Institute of Child Health and Human Development, to study paternity leave over two years.

Petts searched through three national surveys for his data: The National Longitudinal Survey of Youth from 1997; a Fragile Families and Child Wellbeing Study; and an Early Childhood Longitudinal Study from the National Center for Education Statistics. 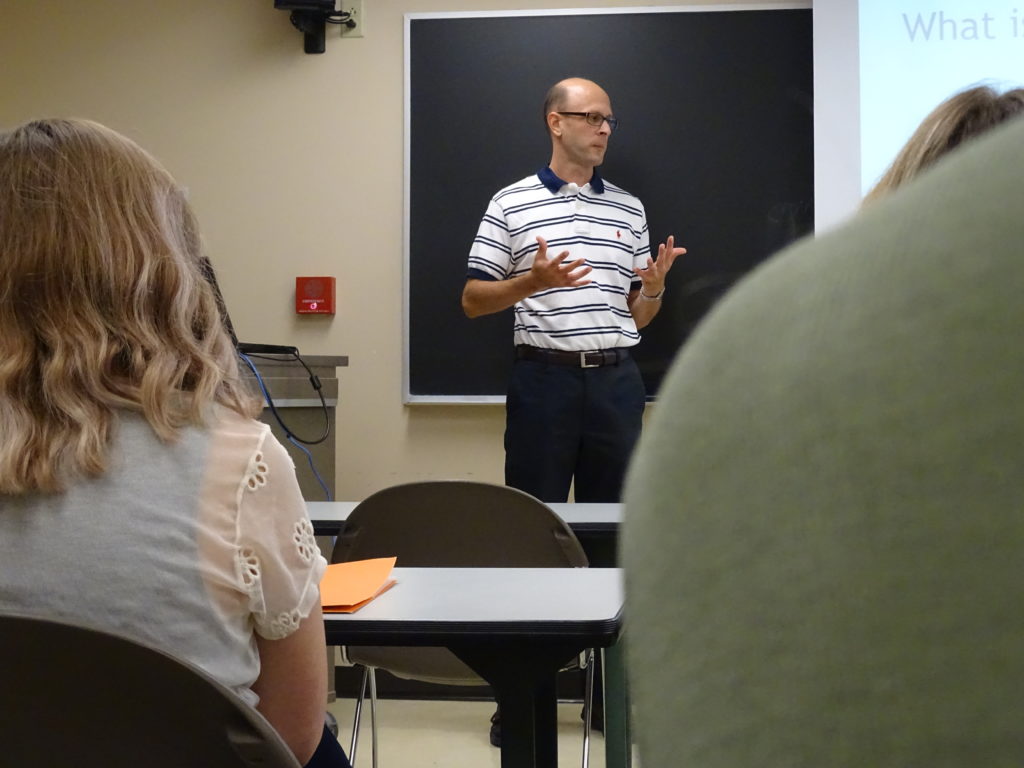 There were other notable findings. Paternity leave increases the likelihood that men take responsibility for their children. Petts said that means fathers are more willing to watch their kids on their own. Paternity leave is also likely to give fathers the opportunity to be more involved with their children. The same rings true in disadvantaged families, who are more likely to be urban, minority, unmarried and low-income. Petts’ research showed paternity leave increases a father’s involvement among disadvantaged families, especially among fathers who do not live at home. Petts believes this could be a way to increase non-resident father’s involvement in their child’s life. “Evidence seems to suggest that paternity leave has the potential to increase the likelihood that fathers are more engaged with their children,” said Petts.

That’s Malik Perry’s goal – to be more involved in his son’s life. From the crawling, cooing, and crying in the middle of the night, he wanted to experience everything as a new father.

Perry is very familiar with the stereotype of African-American dads. “They’re known for not being around or not wanting to be involved. I want to provide for my family, and I also want to be there.” Although Perry left his social work job, and took an extended paternity leave, he continued to coach high school basketball. Now he is the Youth Sports Director at the YMCA of Delaware County, which is also family friendly. Perry remains an advocate for paternity in the short-term and the long-term. “It’s not just bonding with your child; it’s also bonding with your significant other, the person that you’re with. And that’s important as far as building a loving, caring and successful family.”