With a third of Americans getting their drinking water from rivers, according to americanrivers.org, the health of those bodies of water is vital for people, animals and the environment. But what influence do humans have on those waterways?

Ball State biology professor Mark Pyron is investigating this question by comparing North American river ecosystems that have been modified over time to more pristine Mongolian rivers. He’ll do this with an award of more than $190,000 that’s part of a $4 million-plus National Science Foundation grant.

This five-year research project began in the summer of 2015. Part of their study includes collecting samples of fish, insects and plants from rivers in California, Nevada and Utah, plus Mongolia. They are studying more than a dozen rivers until 2020, focusing on semiarid shrublands, mountain steppe shrublands, and short-to-tall grassland ecoregions.

“Primarily, we’re going to test Jim Thorp’s idea for river ecosystem synthesis, which is a prediction that rivers function as small units that are impacted by the local hydrology and local geology,” Pyron said. According to Pyron, the group is studying how food webs, the food chain in an ecological community, change as functions of rivers, as well as how they change in response to factors such as dams and human influences.

A tale of multiple rivers 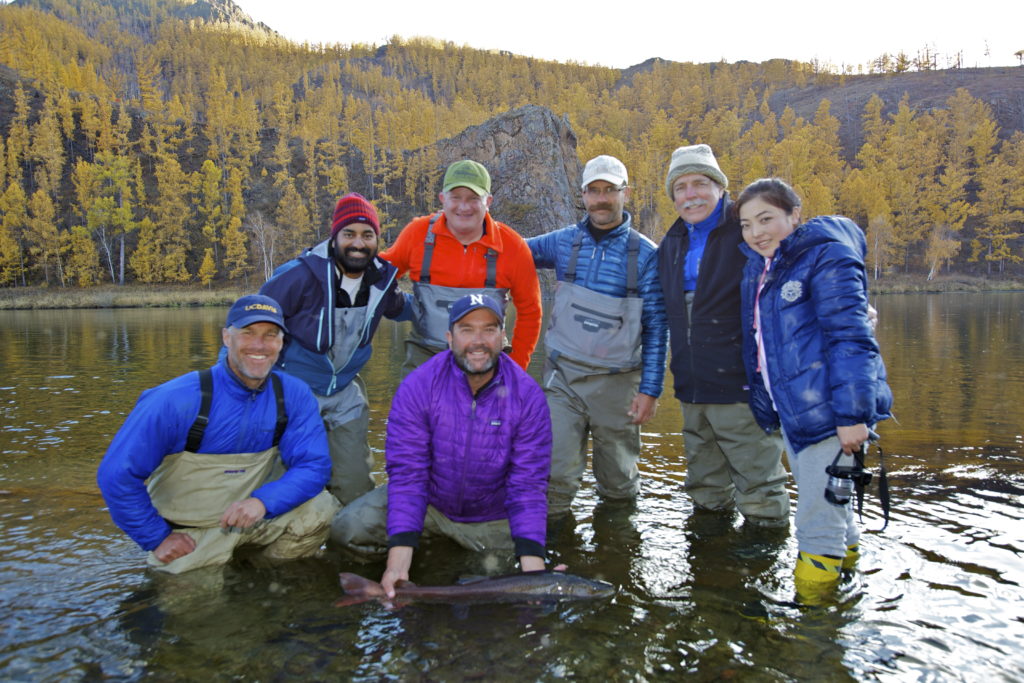 Mark Pyron (White cap) is joined by other researchers at the Eg River, Mongolia

Mark Pyron (White cap) is joined by other researchers at the Eg River, Mongolia

When asked about the expected differences between North American and Mongolian rivers, Pyron said, “One of the overlying differences is just there are fewer species there.” He also lists differences in geology, ecological conditions and evolution as contributing factors.

“The cool thing is that rivers that have no exotic species — there’s nothing introduced there. We can look and we can ask, ‘Is this what a river naturally functions like?’ ”

This project may be the last opportunity to study Mongolian rivers in their pristine state. The Mongolian government is planning to build hydroelectric dams in some of their rivers within 10 years.

As a member of Ball State’s Aquatic Biology and Fisheries program, Pyron’s main focus on the project is studying fish. He and his team will use tissue samples from fish and look at isotope levels to better assess questions related to food webs. Fish collection will be different in each country. In the U.S., they will use backpack electric fishers and nets and in Mongolia, they plan to use rod and reel. Other researchers will focus on insects.

Pyron said Ball State students are motivated to assist with the research. “I’ve got two graduate students who are going to be doing the field work with me. They’re both going to use a portion of this research as part of their dissertations. So they’re heavily involved in it,” he said.

Pyron has a lot of advice for students considering a career in research or biology. “It’s probably more important that you find an area that really interests you rather than something that’s going to sell. It’s more motivating to do research that you’re interested in.”

But he said that if the area doesn’t sell, you’re less likely to get funding for research. Pyron suggests being open to multiple paths of research and willing to modify things to fit funding opportunities.

Because of Ball State’s flexibility in research, Pyron has been able to follow a path that fits his interests and funding needs. He’s thankful for his research opportunities, especially traveling to Mongolia and the Western U.S. where he sees “really cool” sites and creates contacts with students and researchers at other universities.

This article was written by Briana Lomax