This year’s Outstanding Creative Endeavor Award winner has been called supportive, kind, a tough cookie, and a missile of theater goodness.

Karen Kessler, professor of theater, was invited to Ball State University as a guest artist in 2001 and 2003. By her second stint as a guest artist, she had found her new home and never left. Her body of work, from campus to off-Broadway, led her peers to recommend her for this prestigious award.

If you ask Kessler what she does for a living, she’ll tell you she’s a director who happens to teach. “I’m a lucky, lucky person. I’m living a life where I get to work with an awful lot of people whom I respect, and I’m getting to work with kids I just love. So, it’s a great thing. I’m a lucky person in a lucky place,” said Kessler.

A passion for directing 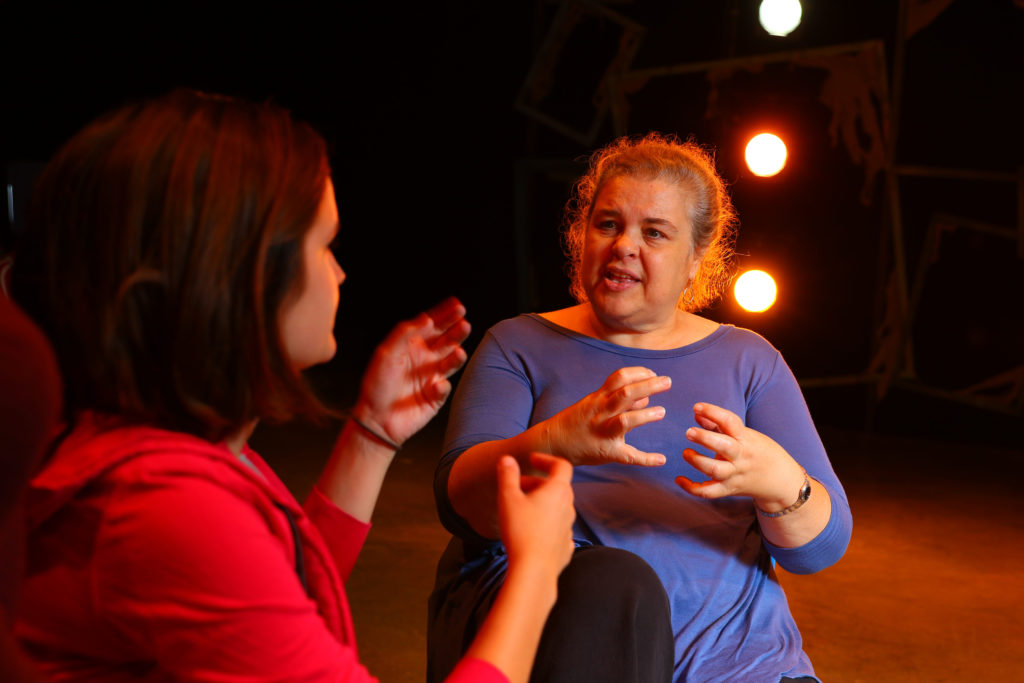 Karen Kessler works with the lead actress in the theater department’s opening play for 2016, which Kessler directed, “The Great God Pan”

Karen Kessler works with the lead actress in the theater department’s opening play for 2016, which Kessler directed, “The Great God Pan”

Kessler began her journey to this lucky place as a criminology/psychology double major at Southern Illinois University at Carbondale. Kessler said a resident assistant, knowing her high school theater background, suggested she try out for a play. She was cast in a role. By her second year, she had changed her major to theater. Kessler went on to get a master’s because she said she discovered her passion for directing.

Kessler continues to articulate that vision at Ball State and in freelance directing, which she’s been doing for nearly 30 years. Early in her career, she was based in her hometown of Chicago. She’s taken her directing skills to England, Russia and around the U.S. That includes a celebrated stint directing The Opponent off-Broadway in August 2014.

The Opponent is a two-act play telling the story of an up-and-coming boxer and his trainer. “It’s just sad, so sad. I love sad stories. But it’s just, it to me is the whole thing of life. The hope and the plan and the joy of what’s to come, and often the consequences afterward of where it doesn’t turn out the way you think it’s going to turn out,” said Kessler.

Brett Neveu, who wrote The Opponent, has known Kessler since their A Red Orchid Theatre days in Chicago. Now teaching at Northwestern University, Neveu is the one who called Kessler a missile of theater goodness.

“She’s a tough cookie with a keen observational eye. She’s also able to track the arc of a story really well, so we were able to build strong character journeys. She also has a ‘tell it like it is’ attitude, which is A Red Orchid quality that keeps the work truthful and meaningful.”

That “tell it like it is” attitude has been seen by Kessler’s students as well. Kessler opened the 2016-2017 theater season by directing “The Great God Pan.”

“I’ve learned so much from Karen. She is an amazing example of a woman who walks into the room and is unapologetically there—she is intelligent, competent and belongs there. She is a wonderful role model for any woman pursuing a career in the arts,” said Morgan.

Teaching her students is one place where Kessler finds joy. “It’s fun working with the kids cause everything’s a new adventure with them. Sometimes when you’re working with professionals, they’re like, ‘Done that.’ And the kids, it’s always the excitement of the new.”

Part of teaching is passing on words of wisdom.

This is her professional advice.

This is her life advice.

“Relax. Don’t be so hard on yourself. This is a journey, not a destination. You walk the road. And just walk your road, and you do that, the best you can and try not to beat yourself up too bad.” 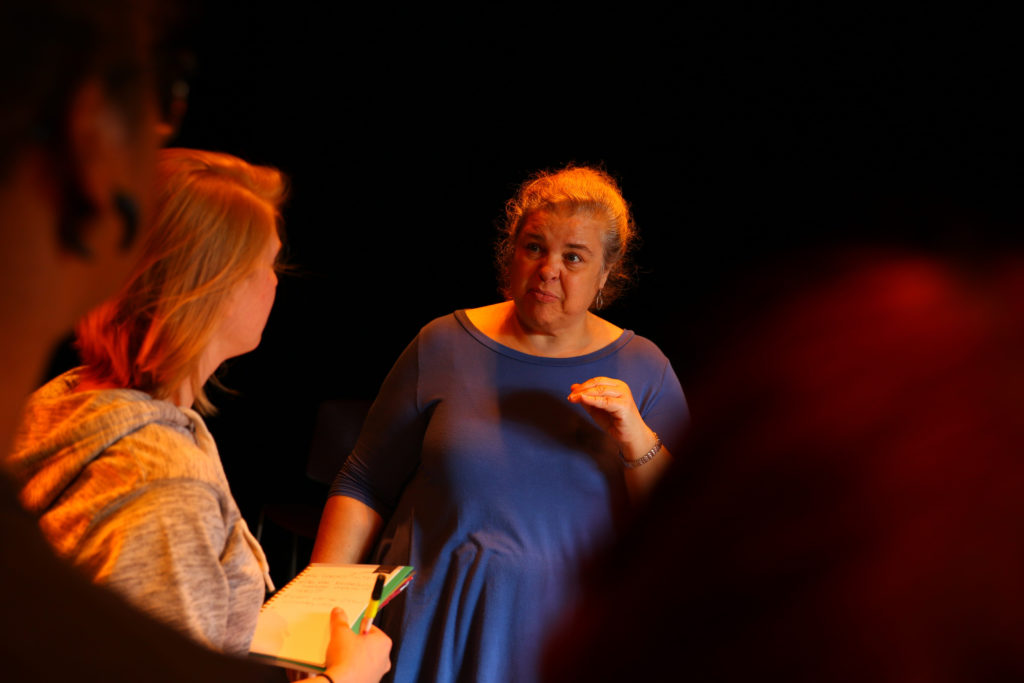 Kessler, a Chicago native, said her goal as a professor is to, “teach students how to go out into the world and be in their art form, in their work, in their business and be a part of it and be themselves and be good human beings.”

And as for that award Kessler’s won, Neveu and Morgan know first-hand, she’s earned it.

“Karen is always looking for the spark in projects, something she can fan and set afire. I’m not surprised she won,” said Neveu.

“Her commitment to the students is unparalleled, and the real world experience you get from working with Karen is invaluable. She deserves this award and more!” said Morgan.

Kessler’s answer, well, it’s a bit different. “My answer to getting an award is but my colleagues are so cool, too.”

When reminded, her colleagues were the ones who recommended her for the award she said this. “At the end of the day, it’s nice. It’s humbling, and it’s a little bit embarrassing because compliments are hard for me. But it’s also lovely, and I love my work and I’m good at it. I know that’s true and my work, my work is important to me, and it’s nice to have that recognized.