Getting to the heart of a molecule in less time and with fewer resources is the essence of what a liquid chromatography-mass spectrometry system is doing for the research community in Ball State’s chemistry department. 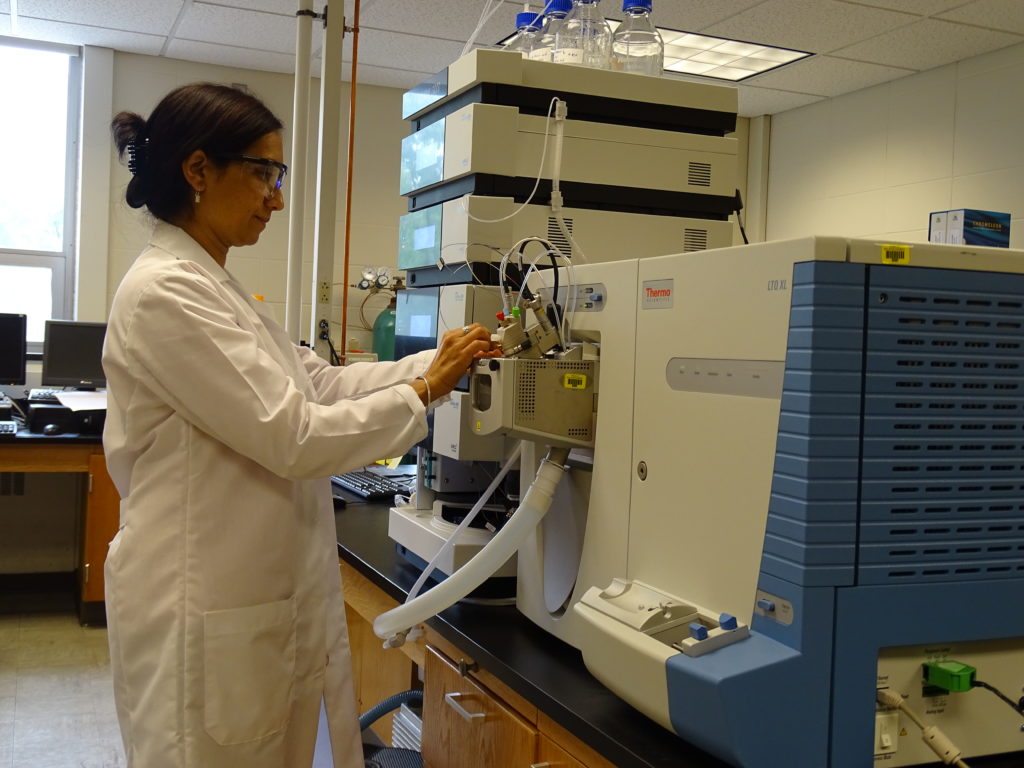 Dr.Rayat looks at test results in her lab in the Cooper Physical Science Building

She said she was delighted to get the funding on her second attempt. “The acquisition of this instrument has provided access to an invaluable tool for the investigation (or study) of a wide range of compounds and biomolecules.”

Rayat’s laboratory is working on developing cheaper, more selective, and more potent drugs to treat diseases such as cancer and cystic fibrosis. The machine is being used to focus on analyzing compounds. The liquid chromatography will quickly separate mixtures, then the mass spectrometry will identify the substances.

The system was installed in spring 2016. According to Rayat, the instrument has far-reaching implications for research at Ball State and should help to recruit more faculty and students.

“This instrumentation is also being employed as a research training tool in undergraduate and graduate courses in chemistry to familiarize students with this modern analytical technique as a part of their curriculum, and thus provide them with skills necessary to succeed in an advanced degree or in a highly competitive global job market.”

Rayat’s research students who work with the equipment see it as an important step in their academic careers.

Jordan Deal, a senior from Collierville, Tennessee, said the system was a valuable resource in his ongoing research project this past summer. “Without it, I would not have seen any conclusive evidence that my compound of interest was actually being synthesized.” Without those findings, Deal said he would have scrapped his project.

Finding hidden treasures below ground is one of the goals of Kevin Nolan. The senior archaeologist and director of the Applied Anthropology Laboratories (AAL) has a new tool to help him—a ground-penetrating radar purchased with a $40,000 grant from the National Science Foundation.

Nolan said the radar has been used in 11 different projects. He said it’s ideal for archaeology, forensics, geology, and mining.

“Projects we are doing include looking for unmarked graves in early cemeteries, creating 3-D models of the construction stages of Native American earthworks (Mounds State Park in Indiana) and searching for signs of an Indian Wars fort (Fort Recovery in Ohio), exploring the geology and archaeology of Great Saltpetre Cave (in Kentucky).”

It is expected that this machine will play a valuable role in furthering interdisciplinary research as well as improving student and teacher training in the fields of geology and anthropology. 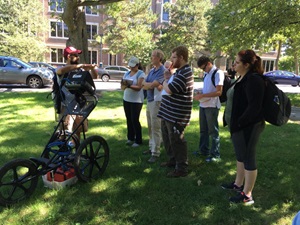 Kevin Nolan conducts a ground-penetrating radar workshop on the quad

One of those students is 23–year-old Amanda Balough of Alexandria, Virginia. With a passion for archaeology, Balough appreciates the opportunity to learn and work with the equipment.“I think that having this specialization will make me more marketable, and it is wonderful that the AAL is doing so much with the GPR and granting me this opportunity. It is very beneficial for any archaeologist to have an understanding of how to operate different survey equipment,” Balough said.

Nolan said various individual research projects for faculty and students have already been planned, providing crucial skills that will set students apart in the job market. He said he also hopes to partner with local cities and towns to help them with construction projects and planning.

“Locating utilities, buried objects or foundations is a service we hope to be able to provide to current and potential community partners.”

This article was written by Briana Lomax & Linda White