Words leave an imprint on those who hear them. They become part of our makeup and influence how we see the world. Matt Mullins is leaving his imprint.

Mullins, Ball State’s Outstanding Creative Endeavor awardee, finds inspiration all around him – from a friend’s anecdote about a trip to the park with his daughter to a news story about an alligator attack on a boy at camp. 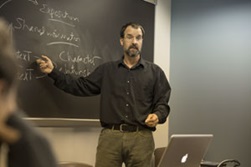 Inspiration for his work goes beyond subject matter to format.

The idea for interactive interfaces came to Mullins while he worked at a digital/multimedia company. In 1998, as Internet usage exploded, Mullins had a revelation. “I had started looking at what the web was capable of doing, and I realized that literature was about to go off the page and take some new directions of interactivity,” he says.

Mullins immediately grasped the implications for readers. “We can engage them and have them go inside the text and manipulate it in various ways and actually kind of take over and control their own experience.”

However, that digital media company changed hands several times, and Mullins was not able to pursue his creative interests there. “I felt kind of like the creative soul was being sucked out of me,” he says. He realized something had to change.

Mullins became a visiting assistant professor at Grand Valley State University, which revitalized his creative work. “Because I get to teach creative writing, and storytelling is at the center of that, it keeps those ideas at the center of my intellectual life, which in return affects my art,” he says.

After three years, he came to the Department of English at Ball State and was awarded an Emerging Media New Faculty Fellowship. “It was wonderful, although it was a bit daunting because I wasn’t really sure what I was going to do at first,” he says. “And then it dawned on me – hey, I need to pick up where I left off with those interactive media projects. And so I began to work on lit-digital.com. I started making these interfaces with the help of a student. And we began putting these things together, and we’ve had some success in getting them published on the web at pretty reputable magazines.”

Mullins constantly works on new ways of presenting stories, but he does not abandon what he has learned before – he simply produces his works in more formats.

This is seen in his “Highway Coda.” It started as a prose poem and morphed into an online digital interface that users can view and interact with. Then Mullins met Mike Pounds. “He had this idea for collaboration where it was essentially going to be me reading the poem and him creating a score for it,” Mullins said. “So I played some guitar, I played some bass, I played some drums. He took what I did and turned it inside out and did all these amazing, crazy things. You wouldn’t even know that it was someone playing the bass and guitar and drums. It’s all very ethereal and, I guess, avant-garde is what I’d call it. And once I heard my voice with the backdrop, the soundtrack, it occurred to me immediately that this needs a visual element to it. So I sat down and created a film, basically, to go with it. And then that, and my explorations of that idea, led me into this world of video poetry.” 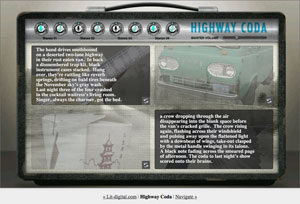 A video poem Mullins created, called “Our Bodies,” has been shown at various film festivals. “It’s a sermon that I found online that I took and remixed and moved around various parts of it,” Mullins says. “And I basically take what he said and change it so that he ends up speaking a poem about the opposite perspective.”

This is an example of what Mullins refers to as the “third thing.” “I find myself to be really fascinated by things taken out of context and remixed and done, having perspectives put on them in ways that create that third thing, that juxtaposition,” he says. “I’m working on a chapbook of poems called Versus, where I take two notable historical figures, maybe living, maybe dead, and take famous quotes by both of them and collide them in a prose poem in a way that blurs their attribution and gives a strange sense of who is saying what and creates this kind of third idea of meaning. For example, Neil Armstrong and Lon Cheney. I combine their quotes together in ways that say things about whatever I’m trying to thematically get at in that particular poem.

“I think good writers kind of steal from reality a little bit and they mold it to their purposes and use personal experience in ways that don’t keep them really nailed down by the facts.”

He tries to bring this concept into his classroom too. “I’m constantly amazed by the creativity of my students and the great ideas that they come up with, and I feel so fortunate to actually be a teacher.”

Mullins has started pursuing screenwriting again because it is his primary teaching focus. “I got involved with the Cinema Entertainment Immersion, which is an annual collaborative program among the English department, the theatre department, the telecommunications department, and the music department,” he explains. “My students write the scripts in the fall semester. I pick five scripts from all of their scripts. And then those five scripts go into production over the spring semester with TCOM students, they’re cast with actors from the theatre department, and the score is written and created by students in the music department.”

In a similar program, The Summer HD Movie Immersion, Mullins and coproducer Rich Swingley work with students to create screenplays. This endeavor has received national acclaim – they won the Broadcast Education Association’s Best of Competition award for the screenplay for Nerdvana.

Winning awards is certainly an accomplishment. But what in his career has meant the most to Mullins? “When I was 19 and started writing fiction and poetry, the big dream in the 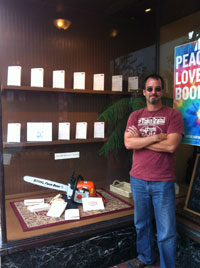 Matt Mullins stands with his display at a book signing for Three Ways of the Saw.

Three Ways of the Saw is his collection of 25 short stories and flash fiction. The title story demonstrates Mullins’s idea of individuals approaching the same situation in different ways. The story is told from the perspective of three characters – the dying man who planted the tree 30 years ago, the tree service owner who appreciates the beauty of the tree and how the old man must feel at seeing it cut down, and the teenager who sees cutting down the tree as a way to earn spending money so he can go out with his girlfriend. “On the surface from a distance, it’s just two guys cutting down a tree,” Mullins said. “But when you get behind that, when you get inside it, when you look at how each individual approaches that particular event, you start to see the complexities of the human condition. And you realize that people see the same moment differently. It’s all hinged upon who they are individually.”

Three Ways of the Saw, both the story and the book, get at the heart of what Mullins wants to impart to his readers. “What I want people in general to take away from my work is to pause and look at things carefully because there’s probably more to it than what’s there on the surface. There’s poetry in a slamming door or the sigh of car wheels on the pavement, depending on where your head is at the time.”