Social psychologist. Anthropologist. Linguist. Philosopher. Sociolinguist. Cognitive psychologist. Do these terms describe a specialized team of researchers or Ball State’s Researcher of the Year? Tom Holtgraves brings all of these skills to his research agenda.

Most scholars carve out a niche, perhaps studying only one aspect of language. But Tom Holtgraves, professor in psychological sciences, realizes that language spans academic boundaries. “There’s a neurological underpinning, but there’s a social side, a cultural side, and an emotional side. There’s a lot of connection there. It’s a multidisciplinary phenomenon, so it makes sense to study it at multiple levels and see how those levels interact.”

The majority of the research Holtgraves conducts is considered basic research, meaning that it establishes basic principles researchers can build on later. “You have an interesting question and you pursue it, and hopefully you learn things,” Holtgraves explains.

Holtgraves usually performs laboratory-based experiments requiring a wide range of participants. Lately his research has targeted adults with Parkinson’s disease and students of introductory psychology. “We have them read or listen to conversations on a computer, and then we have them do various tasks as they’re doing that,” he says. ”What we’re trying to do is find out how they comprehend and what sort of deficits they might have in comprehending.” 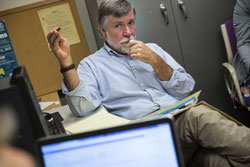 Holtgraves listens as he works with psychology students.

Holtgraves is familiar with Parkinson’s disease because it runs in his family. He knows firsthand how easy it can be to overlook changes brought by the disease. “Language deficits are not as noticeable in those you’ve known all your life. Of course, when my aunt did develop Parkinson’s, there was a change. But it’s hard to override all the years of interaction and see that. Caregivers of people with Parkinson’s may not realize that the patient lacks the understanding of what is being told to them.”

What Holtgraves found is that people with Parkinson’s disease often do not understand indirect meaning, such as that used in sarcasm or unspoken requests. “The reason I got into Parkinson’s was that it’s a way to find out how comprehension goes wrong,” Holtgraves explains. “You know what their organic deficits are; you can see how that maps onto comprehension difficulties. But the other side of it is that it increases our understanding of potential problems communicating that people with Parkinson’s might have, and that has obvious benefits in terms of treatments. The same is true with right-side brain trauma.”

Funded by the National Institutes for Health, Holtgraves’ work with Parkinson’s patients has drawn national praise. “His applied language work with Parkinson’s disease is also seminal – methodologically, empirically, and theoretically,” Howie Giles, chair of the Department of Communication at the University of California Santa Barbara, says. 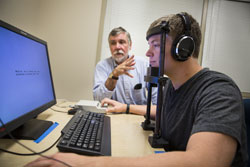 Ethan Dahl completes a measure that tests differences in comprehension between the right and left hemispheres of the brain while Tom Holtgraves instructs.

The comprehension issues in Parkinson’s patients may have more significance than misunderstanding. “The other thing with Parkinson’s I’m looking at with my collaborators is the possibility that some of the cognitive language deficits that we see may actually precede motor deficits. There’s a possibility that it may contribute to the early detection of Parkinson’s. The motor deficits actually may be somewhat later than the cognitive deficits that we see. This is what we’re trying to find out.”

As his Parkinson’s research examines the broader aspects of language comprehension and meaning, Holtgraves also considers its limitations, zooming in on how single words can be misunderstood. He calls these words “uncertainty terms.”

What does it mean when you are told, “Some of the people liked your presentation”? How many are “some”? Fifty percent? Thirty percent? Eighty percent? And what does “liked” mean? On a scale of one to 10, would they give it a three or an eight?

Supported by a multiyear National Science Foundation award, Holtgraves hopes learning the answers to these basic questions will help him with his future research. “The applied side is to try to get a handle on the sort of variables that influence how people interpret uncertainty terms and how they interpret uncertainty terms when they’re in behavioral or attitudinal surveys.”

Holtgraves puts as much effort into using students as researchers as subjects.

Working on projects that interest students has taught Holtgraves about a newer form of communication. “I learned a lot about texting,” he joked. With funding from a Ball State University Emerging Media Innovation Grant, he and a student have been examining linguistics in texting.

First they looked at language. “Some of it’s descriptive, so we came up with ways of categorizing all the different abbreviations and the things that are unique to texting that make it different from other forms of communication,” Holtgraves says.

Next they explored the question of whether or not texting reveals personality. To do this, they had the participants take personality measures. Then they looked at the relationship between the last 30 texts the participant had sent and his or her personality. 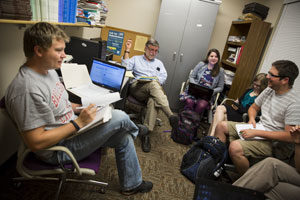 “We found some interesting things,” Holtgraves said. “For example, people who are higher on extraversion are more likely to use what we call expansions. In texting, the usual thing is to shorten things, to use abbreviations. But there is one exception. There are times that because you don’t have any sort of pitch or vocal cues, sometimes people will add a bunch of letters at the end of a word as a means of almost increasing their volume. You can’t hear them, but symbolically that’s what they’re doing. People who are higher on extraversion are far more likely to do that than people who are more introverted. So we’ve found that people’s personalities are revealed in how they text.”

Holtgraves sees many perks to working with student researchers. “It’s good for them – it gives them hands-on experience. It’s good for me – I get help, I get new ideas, I get energy. It’s a cliché, but I believe the researcher-teacher connection is important. I think I’m a better teacher because of the research and vice-versa. It’s very important.”