Cathy Day has been teaching creative writing at the college level since 1997, from Minnesota State University at Mankato, to the College of New Jersey, the University of Pittsburgh, and now to Ball State.

Day’s novel, The Circus in Winter, which came to life on stage thanks to a Ball State immersive learning project.

Day’s published work includes her memoir, Comeback Season, and the novel The Circus in Winter as well as numerous short stories and essays. Day’s current project, Mrs. Cole Porter, a novel about the life of Linda Lee and who she was before she met the American songwriter and composer, is nearly complete. “Most of the fiction that I write is historical fiction, or what I call ‘nonfictional-fiction,’ meaning I write about things that actually happened.”

Day was teaching at Pittsburgh when Tony Edmonds, then a history professor, approached her about an immersive learning class at Ball State interested in turning her novel, The Circus in Winter, into a musical. Day readily gave her permission, only requesting that she be allowed to preview their work. “When I came to see the musical’s progress in the spring of 2010, I was really impressed by the students I met at the Virginia Ball Center and the work they’d already done on the musical,” said Day. “So a month later when Ball State announced an opening for a fiction writer, I went for it.”

Since joining the Ball State faculty in 2010, Day’s work with her students, the university, and the larger writing community has taken many forms, including her work with the Midwest Writers Workshop (MWW), which was supported in part by a 2013 Discovery Award. 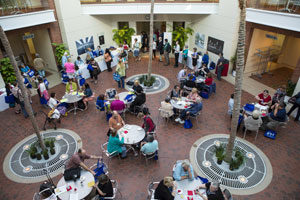 Midwest Writers Workshop participants check in at the registration table and network with fellow writers in the Conservatory of the Alumni Center. There were 238 people in attendance.

The 40th annual MWW, which is completely organized and run by volunteers, was held in July and had more than 200 attendees. Jama Bigger, director of MWW, was especially excited about the number of new registrants. “Eighty percent of the people are new, so word is getting out that this is a great workshop.”

Day added, “This workshop is a way to bring publishing to the Midwest. There are many writers here, and it’s very easy to think that publishing and being a writer happens to people elsewhere. People who come to the workshop love to write and benefit from the opportunity to take a creative writing class and have access to agents, editors, or publishers. The workshop gives people a sense that there is a path, a next step that they can actually achieve, all offered in a face-to-face environment.”

Part of Day’s Discovery Award allowed for undergraduate and graduate students to receive scholarships to attend the conference for the first time. Nine students attended the conference free-of-charge as future writers. An additional 11 students were awarded internships as social media tutors for attendees creating and navigating social media accounts and resources or as assistants for literary agents attending the MWW.

New to this year’s MWW were Tech Intensive sessions. Jane Friedman, a regular speaker of the workshop, has been telling attendees to use social media for years. However, there were never opportunities to teach writers how to use social media to promote their work. Day brought the student interns into these sessions to assist their professional counterparts.

“I always thought of blogging and social media as something that kids did,” said Day. “It never occurred to me that I had to make it part of my life as a writer to learn how technology works and to find my readers or potential readers. So a few years ago, I asked my students to show me how to get started.”

For Day, the key to using social media effectively is what she calls “literary citizenship.” “I trained the interns using this principle. Social media and blogging don’t have to be about bragging or self-promotion. It’s about being interested in what other people are doing and using your online presence to contribute to the world of books. Being connected with other writers, whether online or face-to-face at the Midwest Writers Workshop, makes you feel like a writer.”

To further this effort, Day created literarycitizenship.com, a blog for her students and anyone else interested in the topic. Additionally, Day says she would like to create a book or textbook on this topic for future or beginning writers. 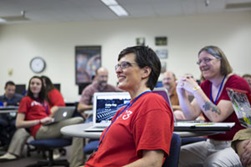 “Creative writing is not a pre-professional discipline. But I think literary citizenship is a way to teach students that interacting with the publishing industry is just as important as learning to write well.” These activities include reviewing books formally or informally on Amazon or Goodreads, interviewing writers, and blogging about books.

“In my experience, what brings many students to creative writing classes isn’t just a desire to write or publish but also a love of books and reading. It’s empowering to students to learn that there’s a word for this thing they want to be – literary citizen – and there are simple, practical things they can do via social media to become a part of the publishing world – whether they become published authors or not.