Tell us about your current job. Day-to-day? Any long-term projects?

In my current job, I am an assistant professor of Physics and Astronomy at Big Sandy Community and Technical College, a small community college tucked away in the hills of Appalachia. I teach an array of introductory physics and astronomy courses, in both in-person and on-line modalities. Some of my former students have gone on to become nurses, engineers, pharmacists, and teachers. In my other ‘job’ I am a doctoral candidate at the University of Louisville where I am using data from the TESS (Transiting Exoplanet Survey Satellite) to investigate stellar physics NOT related to exoplanets, but instead stellar oscillation. 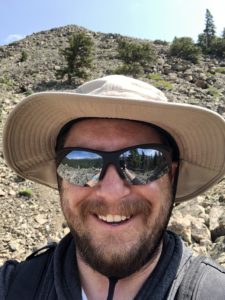 Describe your career path. How did you get where you are?

My career has had a twist or two. Upon graduating from Ball State, I started graduate school at the University of Alabama in the fall of 2011. After a year of graduate work, I started a teaching job at a private high school in Miami, Fl. In the Fall of 2013, I started at the community college as an instructor and was promoted to assistant professor a few years after. I started the doctoral program in 2017 at the University of Louisville and officially became a doctoral candidate in the fall of 2021.

How have you grown and learned in the successive roles that lead you to your current position?

Teaching physics means learning physics. It is impossible for an engaged teacher to not learn and grow in their field if they are engaged with the material and their students. As a result, I had a much better background upon started courses at UofL than I did when starting Alabama in 2011. That said, for the teaching side, it wasn’t even on my radar as an undergraduate until I started teaching as a TA for Dr. Grosnick’s algebra-based lab sections. It was there I realized I enjoyed connecting with students and teaching, not just doing research.

What is the most fulling part of your job?

“The most fulfilling part of my job is watching students, in an area of extreme economic depression, achieve their first academic goal, to then realize they can do anything they want.” – Garrison Turner

I’ve had first generation students raised in poverty go on to become aeronautical engineers for UPS, graduate pharmacy school, become a variety of engineers, nurses, doctors, etc… Watching single parents achieve the ability to provide a more stable income for their family simply does not get old.

Were there any professors, classes, or professional opportunities that had particularly significant impacts on you at Ball State?

In four years, I spent hundreds, if not thousands, of hours with Dr. Kaitchuck between being a student in his classes and as a research assistant. From him I learned humility in the classroom, how to handle professional criticism, personal adversity, and how to be a teacher.

Other teachers that had a profound impact on my within the department were Dr. Islam, who I worked with for several years as the radiation safety student worker, Dr. Grosnick, Dr. Khatun, Dr. Hedin, Dr. Cancio, Dr. Ober, and Dr. Cosby. From Dr. Grosnick I learned classroom management as well as a good foundation in E&M. Dr. Ober was one of the most self-less individuals I’ve ever met. I remember spending time with him while he was working on his study regarding ISTEP scores, as well as a few times during grad school he would be around the building on the weekends, and we would sit and chat, and allow me to bounce ideas about my research off of him. He genuinely enjoyed the professor part of being a professor. Finally, from Dr. Cancio, I learned how physics department meetings should be conducted when you’re a department of one.

“I can say without hesitation that the professors I had in the department were second to none in terms of being teachers and mentors.” – Garrison Turner

What advice do you have for current or future Physics students who may hope to follow your career path?

As involved as I was in the department for six years, I was also involved in a few other endeavors (church, rock band, etc…) during my time. As a Muncie native it was easy to stay involved in various parts of the community that I had been years before. This caused a split of focus. As a result, there were things I didn’t realize that I hadn’t absorbed until Dr. Cancio’s E&M course. Some of these deficiencies followed me to Alabama and played a role in the how the year there ended up. So my advice would be, for the time while in the department, dive all-in and commit to school as, if nothing else, at least the highest priority and don’t get distracted. Also, a little computer coding never hurt anyone.