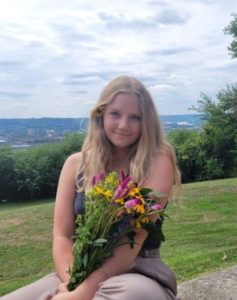 Hannah Flanagan attended Ball State in order to pursue her aspiration of becoming a bilingual physician by studying Biology, Pre-Medical Preparation and Spanish. She currently works at Ball Memorial Hospital as a Scribe in the Emergency Department in order to gain shadowing experience. She is also an active member of the Peer Educators through the Office of Health Promotion and Advocacy which has refined her leadership skills and allowed her to explore facets of public health education.

What led you to pursuing Medical Spanish? Has your desire to be a bilingual physician been something you’ve wanted your whole life?

I have always wanted to be a physician ever since I was young. I had taken Spanish classes in high school and continued taking classes throughout college, but it wasn’t until I found the Medical Spanish course that I realized how I could incorporate both Spanish and medicine into a career. Taking the medical Spanish course allowed me to enhance my communication skills, expand my vocabulary, and most importantly, familiarize myself with the large health disparities that exist in Hispanic communities.

You mention that being a medical scribe is a “passive role,” until your experience with the emergency patient. Would you ever want a more active role at your hospital? If so, why?

Being a medical scribe is a passive role in the sense that scribes do not interact with the patient as much as other medical professionals. Even though I very much value the experience and observations that I have gained by working as a scribe, in the future I would love to work in a more active role in the hospital. I am currently pursuing this desire by studying to become a physician, which would give me a more active role in conversing with the patient and being in charge of their medical care.

Besides the cultural aspects, were there other facets of your Medical Spanish course that were useful to you? Were there some that weren’t?

The vocabulary terms to name the parts of the human body, adjectives of symptoms and how to describe specific medical conditions were extremely useful aspects of the course. In my opinion, the cultural aspect was one of the most beneficial parts of the Medical Spanish course. This is because anyone can quickly search and communicate about someone’s health concerns in another language by using interpreters or even an app.

The cultural aspects – how to speak to the patient, how close you should stand, and information on common herbal remedies that could affect the patient’s condition – are not as commonly understood by people who come from a different cultural background. The course provided me with very important information to keep in mind for a positive experience and a higher quality of care for the patient.

Would you want to learn additional languages to expand your skills?

I would love to learn additional languages to expand my skills. I wanted to learn Spanish to effectively communicate in a person’s native language, and this desire expands beyond just Spanish. I have always wanted to learn Mandarin, as well as Creole specifically to work in the Dominican Republic where I have volunteered on several occasions.

To those currently taking Medical Spanish 338, what advice would you give them?

I would encourage you to try and take in as much information as you can. I know it can be overwhelming when studying such a large amount of vocabulary; however, you might surprise yourself by how much you will remember after the class. You might not find every single piece of information useful to you at the moment, but you never know when you may find yourself in a situation where you need to recall how to interpret medical terms!

What would you say to a student trying to decide if they’re right for Medical Spanish?

Medical Spanish may seem like a very specific skill set; however, it’s a beneficial class for anyone wanting to go into the medical field or even studying Spanish in general. Communicating about someone’s health is an essential skill set that could save someone’s life, or at the very least, make the student more marketable in their future careers.