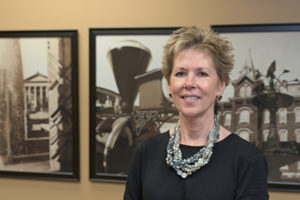 Julie Griffith is a Ball State success story with an impressively diverse resumé. She has held notable roles with Purdue University and Duke Energy, and she now serves as the Executive Vice President for Strategy, Partnerships and Outreach for Indiana Innovation Institute, where she helps brings solutions to clients in the defense space.  Though her career has taken her down several different paths, she attributes the College of Sciences and Humanities with the firm foundation that steadied her; and that is why she’s an integral part of the Dean’s Executive Advisory Committee (DEAC).

While reflecting on the variety of professional work she’s done, Julie Griffith remembers the big question in her early-career interviews: where do you see yourself in five years? She felt about that question how she still feels now: “it’s doesn’t apply.” Instead, she celebrates the unexpected opportunities often presented in the professional realm and the possibilities that cannot be planned for. In her own experience, adaptability and other evergreen, foundational skills she learned as a CSH undergraduate have been instrumental in her success.

“There aren’t linear pathways and I think if you’re on a linear path, you better be prepared for the bumps in the road or for life taking different directions, which is a good thing, not a bad thing. That’s one of the things I loved about being in this college. It prepares you to do all different kinds of things,” said Griffith

Julie Griffith was born in Louisville and raised in southern Indiana in a place she calls the “sunny side of the river.” When it was time to go to college, she chose Ball State and finished her Bachelor’s degree in four years, a time she remembers as a “wonderful experience.”

Before graduating with a political science degree in 1979, Julie planned to pursue law school, but when her younger brother became very ill during her senior year, her plans changed: she entered the workforce and never turned back.

“I’ve stayed connected to Ball State kind of no matter where I’ve gone. I used to live in Houston, Texas and was involved in the Ball State alumni organization down there, so I’ve always stayed connected to the University in some form or fashion,” said Griffith. “I’ve visited campus and been on many different committees and focus groups.”

As a political science major, Julie notes that she gained broad perspectives and training in a wide variety of skills that prepared her for success in many venues, rather than just one. Strengthening this sentiment, she shared an anecdote:

“I have a friend who is very highly successful and is nationally known in her field. She graduated from Ball State with a degree in sociology. Today, if you got a degree in sociology, people may think ‘what are you gonna do with it?’ but here’s what she says: ‘That taught me how to think.’ And that’s exactly what happened with me. This college prepares you to do exactly that.”

Julie has been on the Dean’s Executive Advisory Committee for nearly a decade, having begun her service by invitation from former Dean Michael Maggiotto. She values being able to give back to the university she loves, particularly the College of Sciences and Humanities.

“Ball State has given me so much. I owe so much of whatever I’ve achieved to give back particularly to the College. There are so many other ways you can give back, but this was a way to think about the College, its future, what we’re doing, and what direction we should go, not so much to be an influence, but to provide perspective,” said Griffith.

In each of Griffith’s professional endeavors leading up to her time on the committee, the depth and breadth of knowledge, ability to “think,” and adaptability that she learned in as CSH student have served her well. She hopes to showcase to prospective students that they can develop the same firm foundation as CSH students themselves.

“When I started [working] at Purdue, I continued to be engaged with our university, but I didn’t know about higher education administration; I learned it. When I got into the big energy industry, big energy, I had never been in the natural gas business or the pipeline business, but I learned it,” said Griffith. “When I worked at Duke Energy, I ran state government affairs and regulatory affairs, but I ended up running the foundation on the Indiana side. It was a big foundation, and I didn’t know anything about running a foundation, but I learned.”

“The depth and breadth of experience and the ability to think through how to get from point A to point B I learned at Ball State. I’ve had diverse experience, but the foundation is the same,” said Griffith.

According to Griffith, the committee maintains a keen, future-focused eye, striving to stay ahead of trends.

“Dean McCarthy solicits our thoughts and keeps us up to speed in terms of what’s happening in the College, relative to successes, challenges, and opportunities,” said Griffith. “We’re certainly future-focused as a University, but I think Dean McCarthy and this College in particular are future-focused on what we do well, and the kind of investments we make in the things that we do really well within our college.”

Specifically Griffith emphasizes the importance of not only being prepared for “trends” in higher-ed, but staying far ahead of them. The committee discusses topics such as ways they can continue to engage and recruit students and convey the immense value of programs within CSH, especially those with less direct career outcomes.

“We’re focused on the workforce of the future. We’re educating students today for jobs that don’t exist now,” said Griffith.

“As a college, we have to continue to sell our value. As jobs become more technical, we must continue to sell that success in terms of recruitment to students and their parents,” said Griffith. “Telling success stories is very important. There’s nothing like someone’s personal story to convince students to enroll in CSH.”

Griffith also recognizes the value of strategic and sincere communication that meets a wide array of audiences where they are, from young prospective students to decades of alumni. “It is so hard to cut through the noise,” said Griffith. “We need to tell the things that are hard-hitting. There are so many great stories within this College.”

From her perspective, we must continue thinking about what’s relevant, what’s on the rise, and how we can move toward it. With Julie Griffith’s dynamic approach and forward-thinking insight, the Advisory Committee and the College of Sciences and Humanities are together building a promising future.