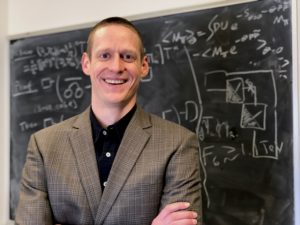 William Jay is a theoretical physicist working on basic research as a postdoc at the Massachusetts Institute of Technology. His research involves precise theoretical calculations in elementary particle physics. He is a 2012 alumnus (B.A., Physics and German) of Ball State University and the Honors College. He also holds advanced degrees in Physics from the University of Cambridge (MA, 2013) and the University of Colorado Boulder (PhD, 2018).

The following interview was conducted by Thaddeus Lee.

What did you study while you were at Ball State?

I majored in Physics and German with a minor in Mathematics.

I am a theoretical physicist, and I’m working on postdoctoral research at MIT. My research is related to trying to find new fundamental particles of nature and to understand how quarks and gluons (some of Nature’s basic constituents) come together to form building blocks like protons, neutrons, and nuclei.

My work happens in an office situation, with (in non-pandemic times) lots of discussion over coffee and brainstorming at the blackboard. My work involves heavy use of the computer, both for Zoom meetings with colleagues around the world and for running numerical simulations.

What are the most valuable skills you learned in your major?

Besides the specific “technical” skills in my German major, the process of learning a foreign language also taught me life lessons of lasting value. For instance, it gave me confidence that I could master new, initially incomprehensible, material by breaking it down into smaller manageable pieces. To read German literature, one starts by making sure the basic vocabulary is clear and then proceeds to make sure an understanding of the grammatical structures are in place.  Much the same process applies to reading technical scientific papers (with algebraic symbols and equations taking the place of vocabulary and grammar). Particularly after my Junior year abroad at the University of Münster, I felt confident in my ability to sit down and work through any tough problem or assignment that came my way.

What is your advice to other Humanities students?

For foreign language students: Make certain that you spend at least a semester (and preferably two) semesters immersed in your language. Mastering a language requires sustained listening, speaking, and (eventually) thinking in the language that can only come from living with it.

I continue to value the foreign language training in German that I received at Ball State. Much of the foundational literature in my field was written in German (e.g., Einstein, Heisenberg, Plank, and so on). On an interpersonal level, I have German colleagues and collaborators, and it’s nice to be able to talk to them (or their young children) in their native language.

If you wish to connect with William, you can do so via LinkedIn. 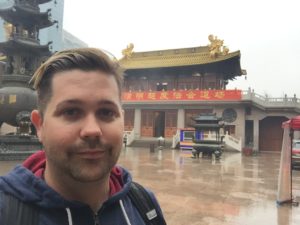 Travis Hatfield graduated from Ball State in 2006 with Majors in Telecommunications (Video Production) and German.  After winning a Student Academy Award for the film “Perspective” that he made during my senior year, Travis moved to Los Angeles, CA where he has been working as a commercial TV editor and animator ever since.

The following interview was conducted by Haley Wade.

What did you study while you were at Ball State?

I went to BSU to study Telecommunications. From a fairly early age, I always knew that I wanted to work in entertainment, editing for TV and movies. While in High School, I had the opportunity to take 4 years of German as an elective and fell in love with the language. Once I arrived at Ball State, I enrolled in more German classes to keep up with it. Semester of German classes passed by until one day, it was brought up to me that if I just added a couple more classes here and there, I could have a German Major! So, I added more classes, stayed at BSU a little longer and left with two degrees; one in Telecommunications, and one in German.

My career now is in entertainment, which I always desired. I have been a working as a commercial TV editor for the past 16 years, have edited a Feature Film, and have been lucky enough to travel the world for work.

Like most in my field, we probably work more than most would like- but it’s a product of enjoying the challenge of what we do. I am usually in the office from 9-6 every day, but often spend time after hours and on weekends doing other projects.

What are the most valuable skills you learned in your major?

I didn’t become a German major to be a teacher, but because the thought of NOT learning more and NOT becoming a better speaker is something I didn’t want to regret. Learning another language is investing in a culture you are not born into. Learning how the German language evolved from one Indo-European root language helps illustrate the fact that we are all the same. Beyond all of that, the idea of learning another language allows you to embrace the world fully. I was able to go to Shanghai for 3 months for work, without knowing the language – and I could learn to communicate. It is the small acts of trying your best to communicate that allows others to embrace you. Even if those others can speak English, showing them that you are willing to be a part of their world is a small act that goes a very long way.

What is your advice to other Humanities students?

Language is a gift – learn it, speak it, enjoy it! As our world grows smaller with the way that we connect digitally, being able to communicate becomes our most important tool. You will never be able to guess how learning another language will enhance and change your life, but it most certainly will.

How did/do your language studies influence or contribute to your current occupation?

How does it contribute to your life outside of work as well?

Because I have invested so much energy into learning German, I don’t want to lose it! I’m often watching Netflix in German, frequenting German restaurants, or just visiting Germany any chance I get. I still buy the occasional book or comic book in German as well.

I’m actually flying to Munich in two weeks, to spend a couple days before driving to Klagenfurt for Ironman Austria, which will be my second Ironman in a German speaking country. I find that it is a great excuse to fly across the pond and to be able to dine on Weißwurst and Kaiserschmarrn guilt free.

I’m not sure if Herr Warner is still around, but if he were/is, he would get a kick out of this. Every time I look at my bookcase, I see this little green book; Deutsche Gedichte. And when I see this little book, I hear only his voice reciting one of his favorite alt Deutsch poems…

Why did this poem stick with me? It had little to do with the words themselves, but everything to do with the man reciting them. He had a love for the German language that you can only appreciate if you have that same love. I’m pretty sure he helped bring it out in me.

Lastly, a bit of irony. I majored in Telecommunications primarily because that is what I wanted to do in life. Creating video comes naturally to me, but words do not. So, in my effort to avoid a major that requires a lot of reading and writing, I ended up picking one doing those things exactly- but in a foreign language.

I think about this often because I’ve realized I never pick the easy path. I constantly do things that are not in my nature and challenge myself to be better.

If you wish to connect with Travis, you can do so via