A two-time Ball State English alumna, Ashley C. Ford returned to campus on September 15 to kick-off her time as the Fall 2021 Writer-In-Residence. With her recently released memoir Somebody’s Daughter, which she started as a Ball State student, Ashley has added “New York Times bestselling author” to her already impressive resume. Prior to publishing the book, she had several notable accomplishments, including guest-writing for ELLE, New York Magazine, The Guardian, hosting five different podcasts, and being named one of “30 under 30 in Media” by Forbes Magazine in 2017. Described as a “writer for the ages” (Glennon Doyle) and “one of the most prominent voices of her generation,” Ashley’s profound literary contributions have left her Cardinal family awe-inspired and incredibly proud.

On September 15, she warmly embraced the audience in Pruis Hall with a reading from her book, Somebody’s Daughter. Ms. Ford read excerpts of her captivating story and engaged in discussion with the crowd, full of Ball State students, faculty, Muncie community members, and prominent figures in Ashley’s upbringing.  Mitch Isaacs, a close mentor and friend to Ashley during her time as a Ball State student, delivered a heartfelt introduction that set the tone for the night. He made one thing especially clear: Ashley is “one of us” and seeks out similarities and shared experiences with others, putting aside any differences. Afterward, she signed copies of her book, giving attendees the opportunity to get up close glimpses of her beloved authenticity. This semester, she will spend time and share her expertise with our English students in the classroom, and be back for two more on-campus, public events, including a conversation with President Mearns on October 7 and Book Club with Professor Jill Coleman on November 11. 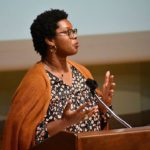 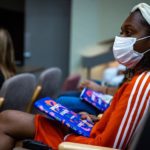 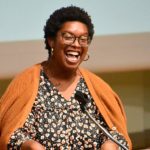 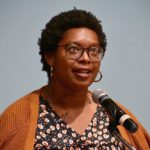 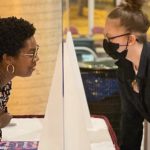 Inspiring the next generation

Ashley’s return to campus demonstrates the phenomenal, real-world possibilities for Ball State students, especially those aspiring to be successful writers themselves. In her original, candid style, Ashley shared raw pieces of her story with our students, from her childhood, to her time as a BSU student, to the journey toward becoming a published author.

“Ms. Ford returning to campus as a successful author and recent BSU alumna impacts students by showing us who we can be at personal, educational, and career levels. She is a real life, down to earth inspiration.”

During her return to campus last week, she sat down for a discussion in Silas Hansen’s English 611 course, where she allowed students to ask any questions they wished. “I love answering questions. And the really cool thing about me is that I have learned how to have boundaries, so if you ask a question that I don’t want to answer, I’ll just tell you very kindly. But there are not a lot of questions that I don’t want to answer or will not answer,” said Ford. Students in the class gained a special insight on Ford’s life as  a writer, learning about how she chose a title for her book and gained the confidence to write a memoir about extremely personal experiences. 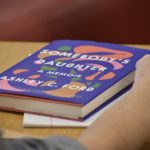 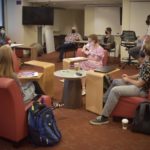 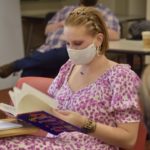 Later that evening, at the reading from Somebody’s Daughter, Ashley offered the students in the audience some valuable advice.

“. . . being a student is fantastic practice for going out into the world and doing things that mean a lot to you and that can mean a lot to other people. Can it happen while you’re here? Absolutely. But what a shame to not get all this time to make some of those missteps and mistakes and get that brilliant, compassionate correction from people who care about you, your work, your future, and want to see you succeed, not just as a worker but as a person.”

Secondary English education major Sophie Richardson was in the audience that night. She felt, along with many other students who were in attendance, “incredibly inspired” by Ashley’s story and shared: “I admire her strength through all of the hardships she has faced, and I think she is a fantastic role model for anyone who may be struggling with similar issues.” Many students who met Ashley personally at the book signing afterward shared kind words, expressing how her memoir moved them and her success story as Ball State alumna personally inspired their own journeys.

“Her return to campus gives current students something to look forward to- that there is a life after college. Ford is an excellent role model for students who are aspiring writers as well. Someone as successful as Ford came from our little city of Muncie.”

Click here to watch a livestream recording of the September 15 Reading from Somebody’s Daughter and here for more information about Ashley C. Ford’s upcoming campus events.