Rob Damler, 87’, is an actuary and equity principal at in the Indianapolis office of Milliman, a global actuarial consulting firm. For the past ten years, he has served on the Dean’s Executive Advisory Committee for the College of Sciences and Humanities. Damler and his committee colleagues from various industry sectors are integral to the discussion of where our responsibilities as a College lie. His perspective as an Indiana business owner inspires idea-sharing that weighs academic applications in real-world practice. In a climate of change for many universities, Damler identifies the committee’s focus as questioning the historical standard and putting those issues on the table for reevaluation. 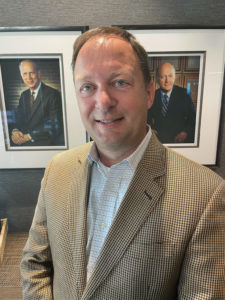 Rob is a self-described “Hoosier at heart,” originally from Brownsburg, Indiana and now residing in Zionsville. In 1983, Damler was drawn to Ball State as one of the few local universities with an Actuarial Science program. Soon after graduating with his Bachelor’s degree, he joined Millman, the company he has since been with for 34 years. Millman is a global consulting firm that has become significantly diversified over the last 20 years. In addition to it’s actuarial focus, the firm now provides financial services and various technology products, including those in the areas of healthcare and finance.

Professionally, Damler is an expert in the field of Actuarial Science. Rob attained Fellowship in the Society of Actuaries through the completion of the required actuarial exams. He is also a member of the American Academy of Actuaries where he participates and volunteers in many areas. Most recently, he has served on the Actuarial Standards Board of the American Academy of Actuaries, which oversees and manages the Actuarial Standards of Practice for actuaries in the United States. He was appointed to the board at the national-level, and is in his second three-year term, currently serving as one of the Vice Chairs of the Board. Prior to serving on the Board, Damler served as the chair of the task force that oversaw the development of Actuarial Standard of Practice 49, Medicaid Managed Care Capitation Rate Setting, which draws from Damler’s area of specialty.

Milliman’s Indianapolis consultants work with the state of Indiana, as well as many other states, providing actuarial and healthcare policy consulting services. As an Equity Principle, Damler is one of five managing partners of the firm at the Indianapolis healthcare practice, which has grown substantially in terms of areas of focus, number of employees, and revenue since Damler began at the firm 34 years ago. At Milliman, he is also heavily involved in recruiting, including from Ball State, where they annually recruit actuarial science graduates.

At Ball State, Damler previously served on the Actuarial Science Advisory Committee.  After serving to the term limits, Rob inquired about ways to stay involved with Ball State. He knew he wanted to stay invested in the university he loves and the college that gave him a strong start to his actuarial science career. When extended the opportunity to serve on the Advisory Committee for the Dean of the College of Sciences and Humanities, Damler was eager to join.

He finds the size and expedience of the College of Sciences and Humanities, which encompasses a broad spectrum of disciplines, to be excellent. Damler described the committee as filled with people of a diverse array of professional and academic backgrounds. Damler is the self-described “math and finance” person on the committee, as the overwhelming majority of his classes at Ball State were in mathematics. On this advisory committee, he is joined by colleagues with backgrounds in agriculture, medicine, batteries and power storage, information technology, zoology, water treatment, etc. Damler continues to find himself astounded that CSH houses such a broad spectrum. “You get this really broad spectrum of people and it’s like – how do all of these things fit under this umbrella called Sciences and Humanities? So, I think that’s the real challenge of this committee- well, it’s not only a challenge – it’s that great learning experience,” said Damler.

“Every time I come, I want to share my perspective of education and what I am seeing professionally – I can share my concepts and ideas – but I am also there to listen and learn, see what other peoples’ needs are, and maybe how some of their needs overlap with some of mine.”

About two years ago, in a committee meeting, Damler made a comment about today’s need for big data, data analytics, and data visualization. His peers, from completely different professional areas, shared a similar idea. “It was such a need, and that need wasn’t just actuarial science and mathematics. It was in computer science, information technology, agriculture, and more, so Dean McCarthy took that idea and implemented it. That, to me, was one of the great satisfactions of volunteering: when you actually see the reason that you get together is to share ideas, have an open mind, communicate back and forth, and spark each others’ interests and comments.”

Damler, who is one of five managing partners in his office, defines his professional perspective as that of a business owner. Working to manage a business with others has given him experience in reaching consensus and supporting his team once agreements are reached. “I think that that’s one of the things that I try to do on the committee: share my thoughts and ideas, but then as those thoughts and ideas may evolve from others and their ideas, helping come to a consensus discussion. I definitely see myself as bringing that perspective of sharing ideas and not being afraid to communicate those ideas in an open environment,” said Damler.

Damler also brings insights into the hiring market and industry trends, which benefit both the Advisory Committee and Ball State students. For many years, he has worked closely with many actuarial science college students, interns, and graduates. “Meeting with them, discussing, and trying to understand what they’re doing gives me knowledge about the skill sets that we need from young college students today.” Bringing that knowledge of current industry hiring trends to students and then sharing those insights with the Advisory Committee can be helpful in determining the direction of the College’s initiatives.

“This is one of the struggles that we have with CSH: there are so many departments with really wide backgrounds that we are focusing our attention on. How do we, especially just meeting twice a year for a handful of hours, focus our energy on a relatively narrow topic that’s going to benefit the entire college?” explained Damler. When thinking back over the last several meetings, Damler named one major topic of discussion as being CSH’s collaboration with the other Colleges. He shared that the committee has questioned the general lack of partnerships between other Colleges that work closely with our CSH students, and that Dean McCarthy does an exceptional job of “taking that question with her” and examining how we can create a “better bridge” between the different areas. “I think it’s interesting: the complexity and the multitude of the various departments within our College create a challenge in responding. For example, if you’re becoming a math teacher, are you in CSH or the Teacher’s College?” he questioned.

Damler is particularly interested in the way in which universities are evolving and how this intersects with affordability. “If we’re concerned with the cost of a college education, is continuing [this or that] Master’s program really the right idea? How many students are graduating from it each year, and we’re dedicating how many resources? It’s that balance between dedication of resources and college graduates. Yes, [certain] Master’s degrees were important at one point in time, but is it still an important program that we need to continue?” questions Damler.

“No one likes to eliminate programs, and doing so will impact someone. You have to weigh that impact versus asking ‘is it time to start taking a fresh look?'” Damler poses the big question: “Does every university have to be everything to everyone?”

While recognizing that answers to many of the questions the committee raises must be addressed at a much higher level, he applauds Dean McCarthy’s continued commitment to listening, synthesizing ideas, and implementing strategic plans in the best interest of our College and students. Most notably, the college recently implemented interdisciplinary programs in Data Science and Data Analytics as a collaborative venture between several departments. By leaning into the wisdom of Rob Damler, the Advisory Committee, and forward thinking leadership, the College of Sciences and Humanities looks to a bright future of reimaging the Liberal Arts education to meet the demands of the changing global job market.