This past fall, Erin Edwards joined Ball State as one of our new Staff Archaeologist in the Applied Anthropology Laboratories in the Anthropology department. In the following interview she describes her journey to Ball State, research focus, and love of making bread.

Describe your journey to coming to Ball State?

Before I came to Ball State, I was finishing up my master’s degree at the University of Indianapolis in Anthropology. Before that, I was an archaeologist working in the southeast. My love of Romans and bioarchaeology is what brought me to Indiana in 2017 to the University of Indianapolis. Dr. Christopher Schmidt had been working on a dental microwear project to interpret the dietary habits of Roman populations and I wanted a piece of the action. My thesis research looked at dental microwear patterns in Roman populations from Italy and Romania in order to understand dietary habits in different parts of the Roman Empire. 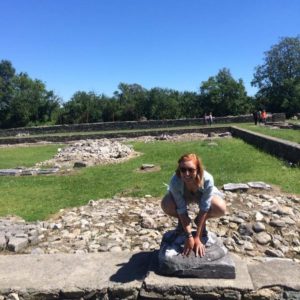 The hiring process for the staff archaeologist position happened during summer 2019, which is when archaeologists do most of their fieldwork. As it happened, I was supervising an archaeological project in Alba Iulia, Romania. I have been an archaeological supervisor since 2013 and participated in archaeological projects in Israel, England, Romania, and the United States. The summer of 2019 was the first field season of a new project, the Apulum Roman Villa Project just outside Alba Iulia. This project is focusing on the excavation of a Roman villa including the main residence and ancillary buildings.

What brought me to Ball State amounts to me following my dreams. I have been teaching archaeology to students at field schools for years and it has always been a farfetched dream that I could work with students and teach them to become professional archaeologists as a real job not just during the summer. Cue the Applied Anthropology Laboratories (AAL) looking to fill this position! AAL is a truly amazing place where our focus is on our students and making sure that they are well trained to pursue jobs in the field when they graduate. The AAL staff has an incredible range of knowledge, skills, and experiences and so far I have learned an incredible amount and it is an absolute joy to be part of the team.

What is your research focus?

My research focuses on dental anthropology and bioarchaeology, but my professional research interests know no bounds. I am working on dental microwear projects in collaboration with the University of Indianapolis as well as an ancestry estimation project on Roman populations in Romania through dental and skeletal morphology.

In Indiana, I have been working on a fabulous ghost archaeology project where a team of faculty and students from the University of Indianapolis conducted an archaeology survey of the Skiles Test Nature Park in Indiana. Legends dating back to the 1960s about Skiles Test tell an eerie story of how Test supposedly killed his wife and kept her body in a glass coffin strung with blue lights. His house became known as the ‘House of Blue Lights’. This project has been amazing to work on, and I can tell you, spoiler alert, the legend is horribly inaccurate.

What are some of your goals for the first year here?

My main goal for my first year here is to get ingratiated into the Ball State community. Other goals included becoming a Qualified Professional archaeologist with the state of Indiana and getting involved with the Indiana Archaeological Council (IAC) as a member and spokesperson for Ball State.

But, I am most excited about AALs recent partnership with the Indiana Medical History Museum (IMHM) located in Indianapolis. Right now, the IMHM executive director, Sarah Halter, and I are leading a Ball State Crowdfunding campaign to raise funds to do a non-invasive geophysical survey to locate the unmarked graves of patients buried at the Central State Hospital from 1848 to 1905. This project will hopefully define the boundary of the cemetery and identify the number of individuals located within the cemetery. These long forgotten patients were treated poorly and often were not cared for with dignity or respect. Further, the medical treatment, while revolutionary for its time, did little to help the patients suffering from mental illness. These patients deserve to be memorialized and treated with respect in death more than they were in life. For more information on this project, please follow this link and share our project!

What are some of your hobbies/non-academic interests?

I love knitting, crocheting, and woodworking. Recently, my sister-in-law gave me a yeast starter for making breads, sweets, and really anything you would put yeast into, so that has been taking up a lot of my free time. Homemade bread really is the best thing since, well, sliced bread. I’m also an avid runner, traveler, and true crime aficionado.

Click here to see all of our posts introducing new CSH faculty and staff.