Former South Decatur student and current Ball State senior Noah Nobbe is spending his final college semester learning from some of the best in the state in his field. This spring, he is working full-time as a cultural history and collections intern at the Indiana State Museum in downtown Indianapolis. To gain the final credits for his degree, Nobbe is learning how to operate in the public history field through a great number of avenues during his internship experience.

Nobbe, who graduated from South Decatur in 2016, has spent the last four years working toward a degree from Ball State University. In his junior year, Nobbe wrote and directed short biographical videos with real historical reenactors that focused on Indiana figures in the American Revolution. He also interviewed prominent Ball State alumni to help create a documentary on the history of Ball State’s Honors College. Nobbe spent his college years in other fields as well, as he spent this past fall as an assistant coach for the Shenandoah High School football team.

At the Indiana State Museum, Nobbe looks to work on a number of different projects. Recently, he has spent time researching the women’s suffrage movement in the early twentieth century. Kisha Tandy, his supervisor and an assistant curator at the museum, will host discussions about a number of black women that were prominent in the movement in Indiana, and Nobbe has worked to assist her in any way he can. He has also begun work with the archives, helping to document incoming historical artifacts into the museum’s database.

As he moves closer toward graduation, Nobbe hopes to continue to learn multiple facets of public history during his time in Indianapolis. Once his time there is finished, he will be more prepared than ever, and more excited than ever, to propel himself into his career.

Noah Nobbe was interviewed by the College of Science & Humanities blog where he spoke on his experiences as a student of Ball State University.

How did you decide that you wanted to pursue a degree in public history?

It took me a while to find my desire to pursue public history. I originally came to Ball State to pursue a social studies education 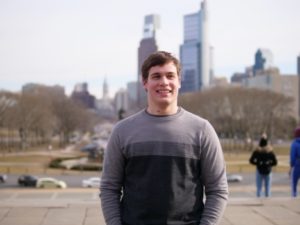 degree. After about a year, I felt my calling change. I still wanted to work in history, but I did not want to move into the regular history track. When I found public history, it seemed to fit my desire perfectly. In public history, I could work with history but with a wider scope and audience than in teaching. My options after graduation would be of a vast variety, as there are so many career options within public history. The more time I spend as a Public History major, the more I appreciate my decision.

What are some classes that you feel really prepared you for your internship?

I had so many classes that prepared me for this internship. I still cannot believe how lucky I have been with my opportunities at Ball State. I took my Intro to Public History class in my sophomore year, which gave me a great idea of all that this career path could entail. I learned all the basics of the major, and there are pieces of that class that I bring up to this day, even on visits to museums with family or friends. That class would become a launching point for some of my greatest experiences as a college student. Because of my work in that class, I was recommended to another professor, who invited me to work on a project with the Ball State Archives being led by a team of graduate students. After that, I was also invited to join a team working on a documentary for the Ball State Honors College. These two classes gave me the ability to get as close to a real public history job as I could without being an intern. Outside of classes, I was also approached by the Indiana Sons of the American Revolution through a former professor to create short reenactment videos on Indiana veterans of the Revolutionary War. I wrote the voiceover scripts as well as directed the shoots, which included about thirty reenactors. I even got to suit up myself at one point. If I told my freshman self that I would have all these opportunities in a few short years, he would have never believed me. I never thought that someone from a small farm in southeast Indiana could be blessed with such opportunities at a school like Ball State. After experiencing such a wide range of job-like classes, I felt more than ready to tackle the next step.

What is the most fulfilling part of your internship?

My internship this semester is at the Indiana State Museum. I am working as a curatorial intern, under Kisha Tandy, who is absolutely amazing. She has helped me grow as a museum historian, and each week has brought new tasks for me to learn. I have worked in research, historical writing, archiving, and more. I am sure there is even more in store for me in the coming weeks. However, I would have to say that the most fulfilling part of my internship so far has been working with the artifacts. While many people might find work in an archival database tedious and boring, I love the work and the sense of completion that comes with a finished collection. Each new artifact comes with its own story, even if it’s a random letter or the envelope it was sent in. And even if that story does not seem clear immediately, the more artifacts you find, the more the puzzle comes together. A letter you found yesterday that meant little could suddenly become important because of a letter you found today. History is such a puzzle, and each piece makes the full image just a little clearer. That is what I love most about this internship and public history in general: it allows me access to that puzzle that I could not have otherwise, and I can leave my mark on the profession through my work in the constant pursuit of finishing that puzzle.

You can connect with Noah Nobbe on LinkedIn.