Physics can be dangerous.

That’s what I was thinking as I leaned in closer to catch a photo of a spark flashing from the van de Graaf generator to a detached rod, Bradley Schrader wielding the rod like a wizard as he guided the electricity.

But this isn’t magic, this is physics. More specifically, this is the Society of Physics Students,  Ball State’s award-winning chapter of physics students who travel to local schools and show demonstrations in order to get the students interested in STEM disciplines. 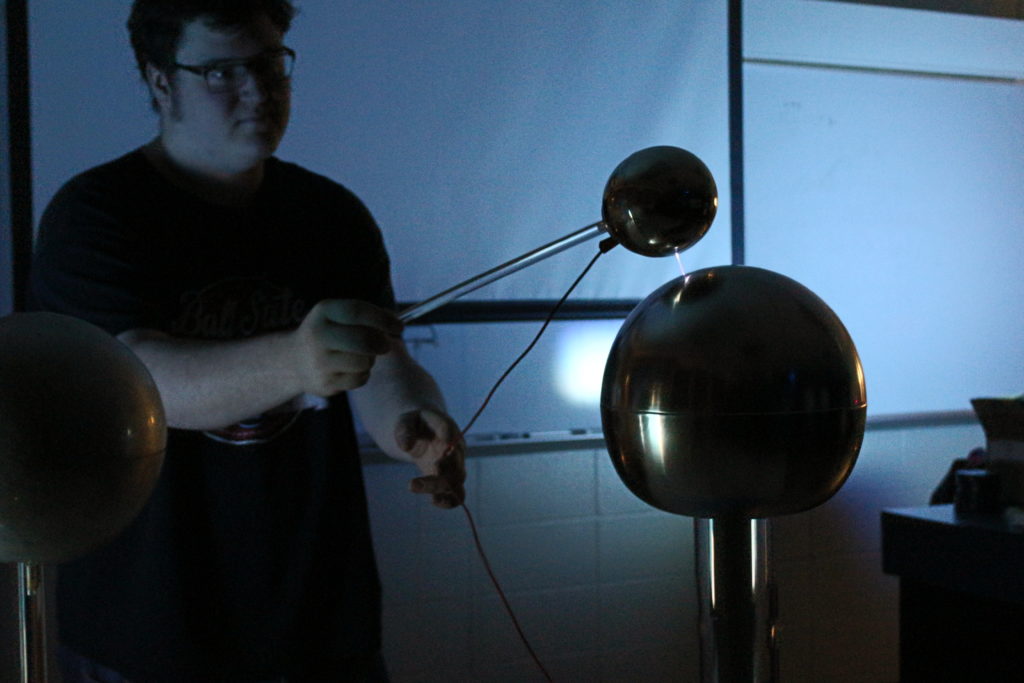 The Ball State chapter of the Society of Physics Students was founded in 1968 and has grown into an impressive group, winning the national Outstanding Chapter award in 2005. 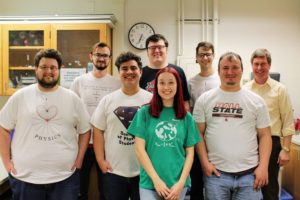 This year the National Office of the Society of Physics Students, part of the American Physical Society, has designated the Ball State chapter a “Distinguished Chapter.” This is the third year in a row the chapter has received this national honor.

Led by current chapter president Elaine Gillard, this fifteen-student group was recognized because of their emphasis on community outreach. Determined to show young students how exciting physics can be, the chapter packs up their equipment and travels to various local schools around Muncie to perform demonstrations that teach the basic principals of physics in a fun, visual manner. The chapter has been performing these presentations at schools for approximately the past fifteen years, and each batch of student members is always striving to give the best possible presentation.

“We love to encourage young kids to keep asking questions about the world and the universe…For me, as a woman in STEM, I really like to work with young girls and help them realize that they can do physics.” – Elaine, Chapter President

In addition to traveling to schools, the chapter also organizes a competition between the Ball State science clubs called “Clash of the Sciences.” Chemistry, biology, and physics all participate in performing presentations for families and students who then vote on the winner. This past year they had an attendance of over 140 people. While chemistry was the winner in 2019, the physics students are certain they will reclaim their crown.

In order to fully understand the significance of the designation of “Distinguished Chapter,” I ventured over into one of the Cooper labs for a demonstration.

As the cart of physics tools is wheeled out into the lab, the energy in the room started to rise. It was clear that the students love showing off how cool physics can be. 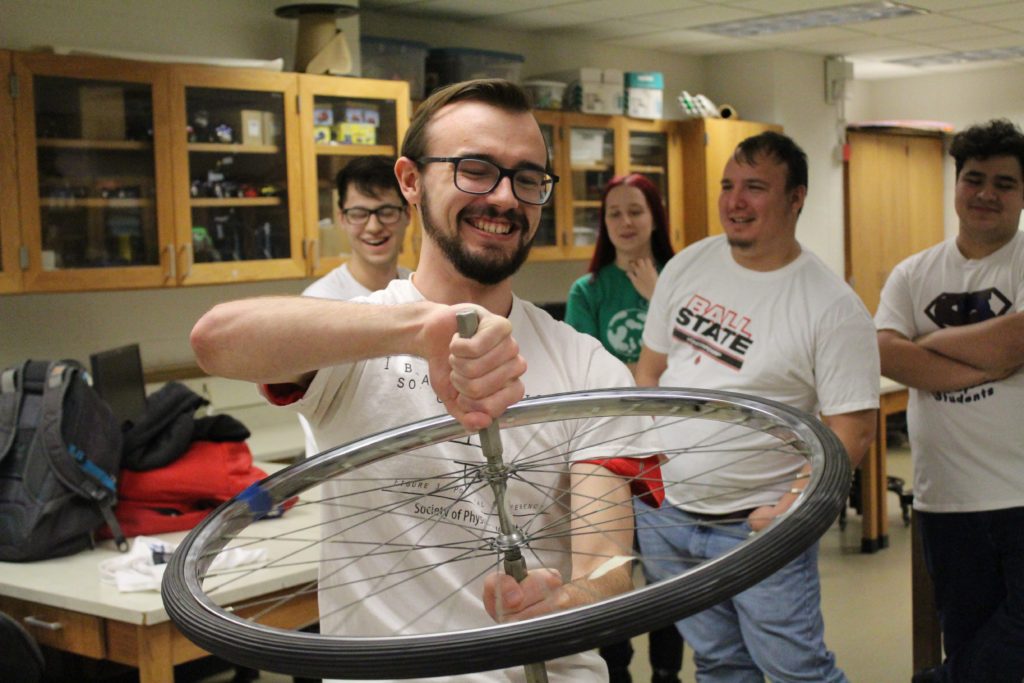 “Because there is only so much spinning that can exist in the universe at any given time,” Spencer Deats replies, with a laugh from the group.

This is the explanation that they give to the kids to help them understand the conservation of angular momentum. Since the wheel has angular momentum (read: spinning) when Joe turns the wheel a different direction that momentum has to be absorbed, so it travels through his body and to the stool, causing the stool to rotate.

In order to demonstrate that magnets can produce a force that repels away other magnets, called magnetism, they brought out a tool called “The Ring Launcher.” 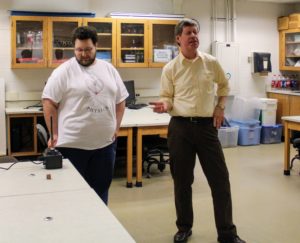 This launcher has a metal rod with a copper wire wrapped around it.  While the launcher is still off, the students place a metal ring on the outside of the rod and wire. When the launcher is turned on, an electric current flows through that wire creating a magnetic field. But, the electrons on this wire are moving as an alternating current, meaning sometimes they move forward and sometimes they move backward. This results in a constantly changing magnetic field. Because of this changing magnetic field, when the launcher is on a current is produced in the ring as well. These two currents produce a repelling force causing the ring to fly off the rod.

When they do this demonstration in schools, the goal is to create a stunning presentation. In the picture to the right, Dr. Grosnick shows the students how to look cool by catching the ring without looking.

One way that the students prove that an electric current is active around the metal rod, the students place a light bulb around the rod that lights up the closer it gets to the copper wire. 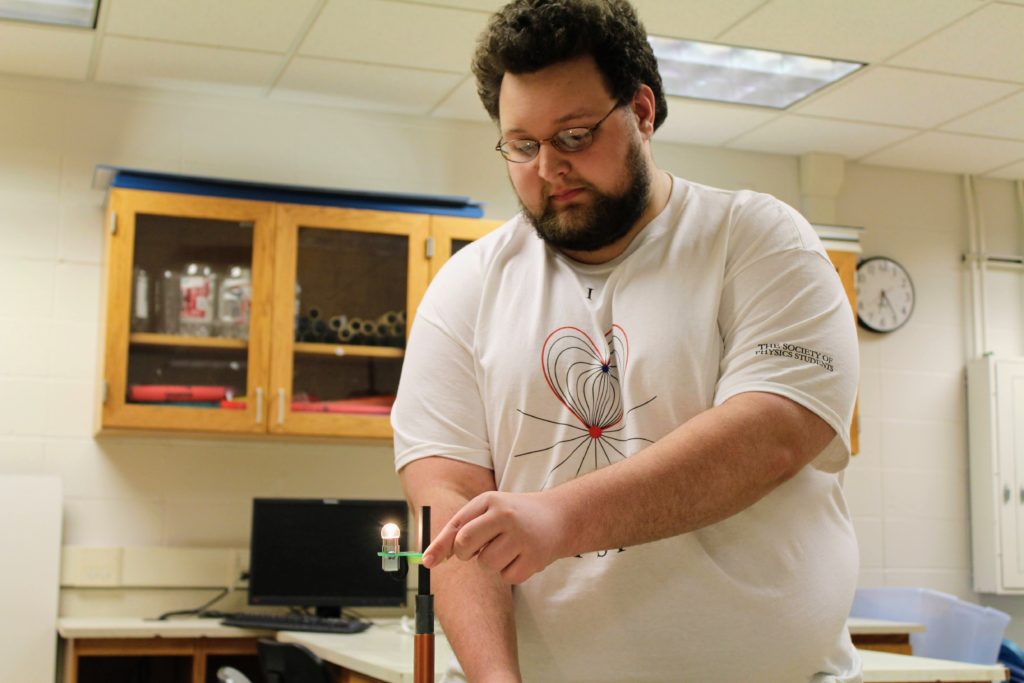 Ethan Tuttle demonstrates the presence of an electric current while avoiding touching the launcher, which can get hot when active.

The final demonstration is the showstopper: the hair-raising electric van de Graaf generator that the kids love to see.

The students explain the van de Graaf generator as “a machine that shuffles its feet across the carpet really fast,” creating static electricity that is on the dome. The students can interact with the dome in various ways, such as using a grounding rod to transfer electrons through the air, creating the spark pictured above, or placing their hands on top of the dome to transfer electrons to their own bodies – resulting in the well-known hair-raising.

As they set up the machine, Bradley shared stories of previous mishaps during demonstrations including a painful moment when a spark jumped from his head to a light fixture on the ceiling. While safe, there is definitely an element of risk at work in this demonstration.

“Sometimes we get a kid who’s just so excited about science and they have as many questions as they have statements. So, with little fixes here and there, we get to help them figure out what their statements should be” – Elaine, Chapter President

After some demonstrations of the static electricity, such as causing a string to defy gravity by following a grounding rod and foil pans to flying off the top of the dome, it was time for the impressive demonstrations. 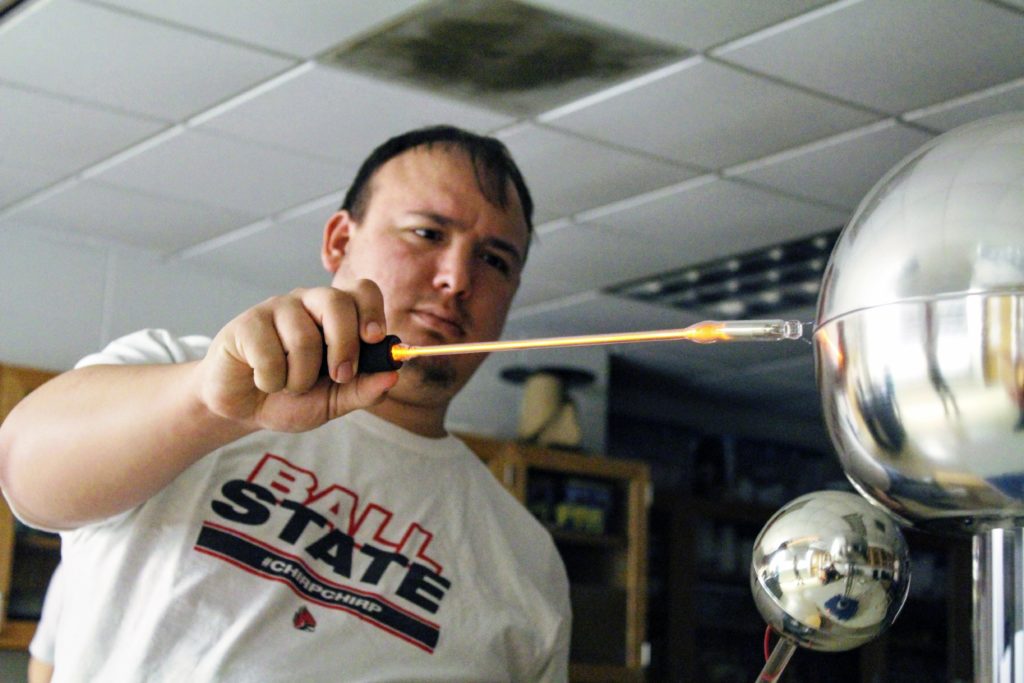 The last van de Graaf presentation is sure to excite any kid who sees it: the hair-raising demonstration. Having the longest hair, Elaine placed her hand on top of the van de Graaf generator. When she did so, the electrons flowed onto her skin and traveled around her body – which she can feel since the electrons caused the hair on her arms to stand up.

As the electrons accumulate on Elaine’s hair, the like electric charges repel each other, causing her hair to stand up and separate in the air. 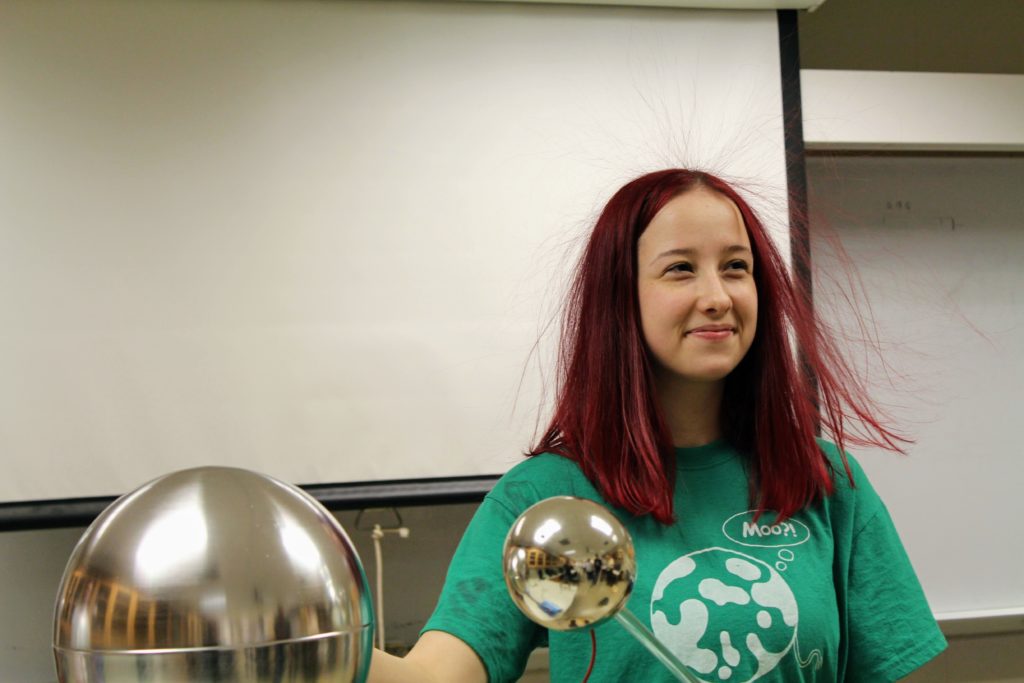 Given the spectacular nature of these demonstrations and the student’s ability to explain complex principles of physics, the designation of “Distinguished Chapter” is well-deserved.