Earlier this month the third Symposium on Games was held in Bracken Library, where students, faculty, staff, and community members gathered together to celebrate game research, design, and development. The Symposium had a great turnout with a significant amount of diversity among attendees. Symposium organizer Paul Gestwicki said, “When I gave the opening remarks I expected to see a sea of young faces. But I didn’t. I saw a sea of faces. I saw a greater diversity in age than I expected to see.” Initial projections had been that the attendees would be about seventy percent students. But the actual demographics was closer to fifty percent students, with half of those being graduate students.

The Symposium was organized by three different types of experiences: game demos, presentations and workshops. The following is a series of snapshots from the symposium, presented by type of experience in that same order.

The demos were a new track introduced this year at the Symposium. Rather than being a commercial space for the purpose of testing and purchasing games, this was about the celebration of development and the testing of ideas. Attendees and presenters got an hour to spend playing the games and providing feedback. In the midst of the laughter and camaraderie there was networking and constructive discussion. 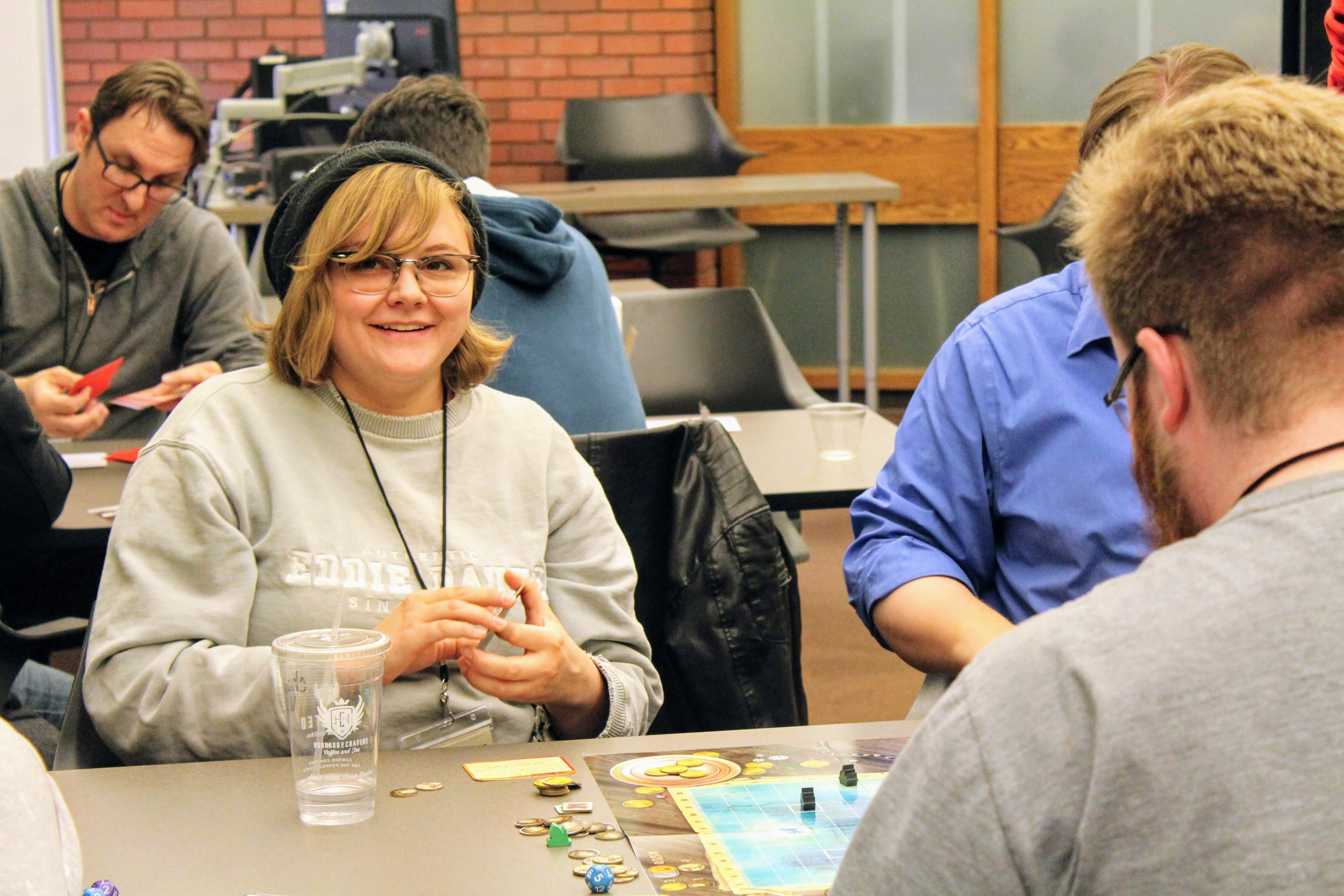 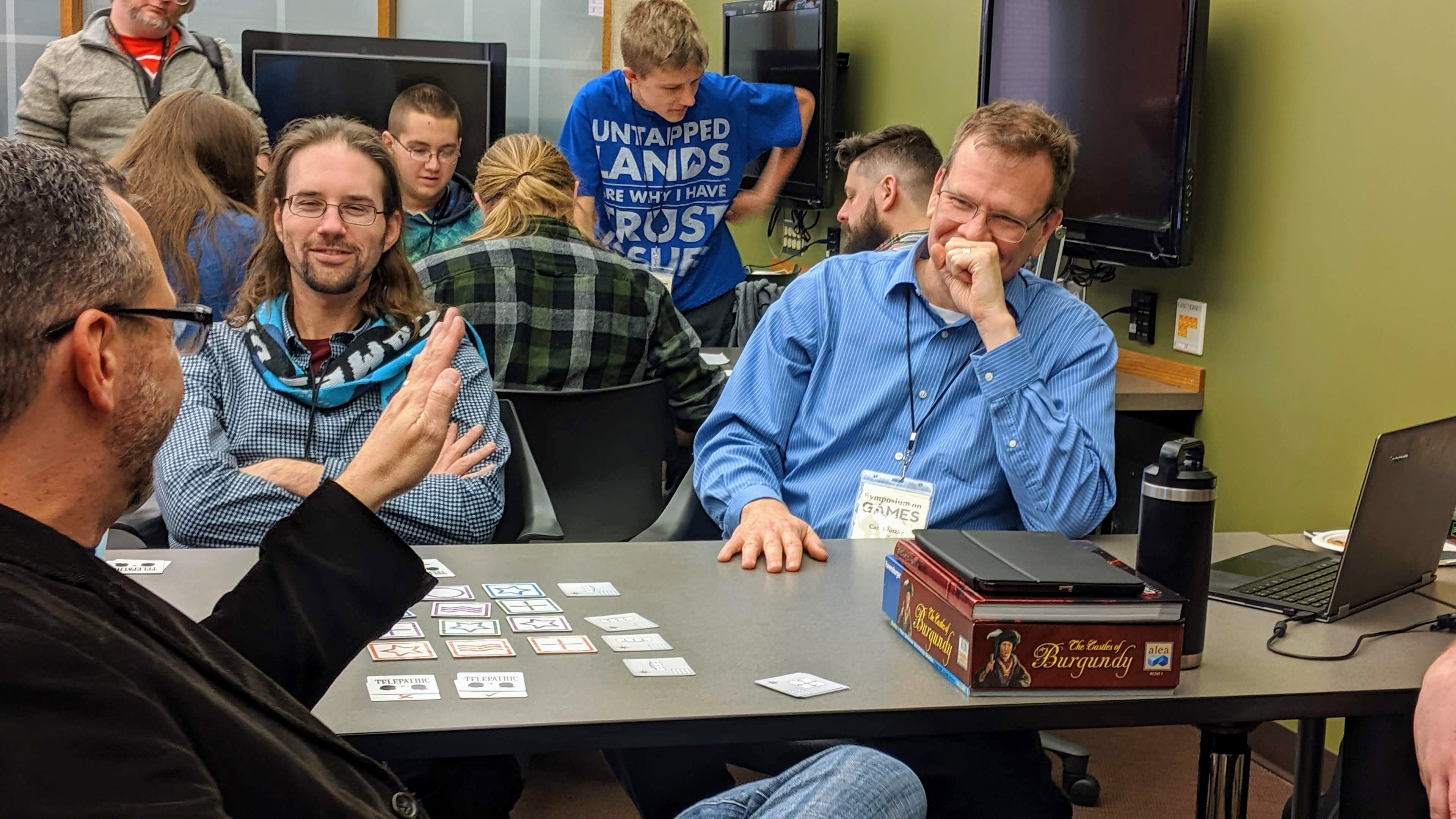 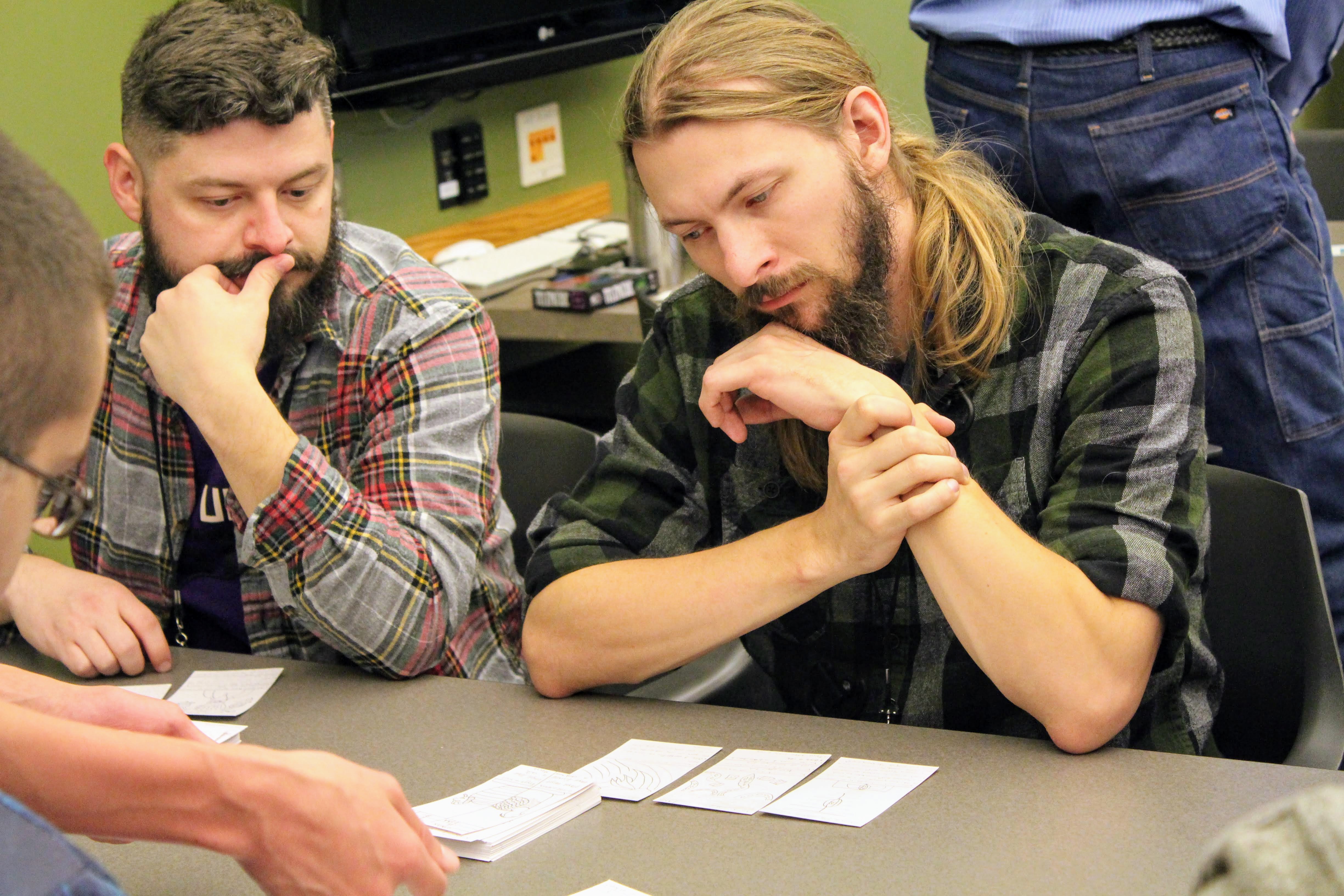 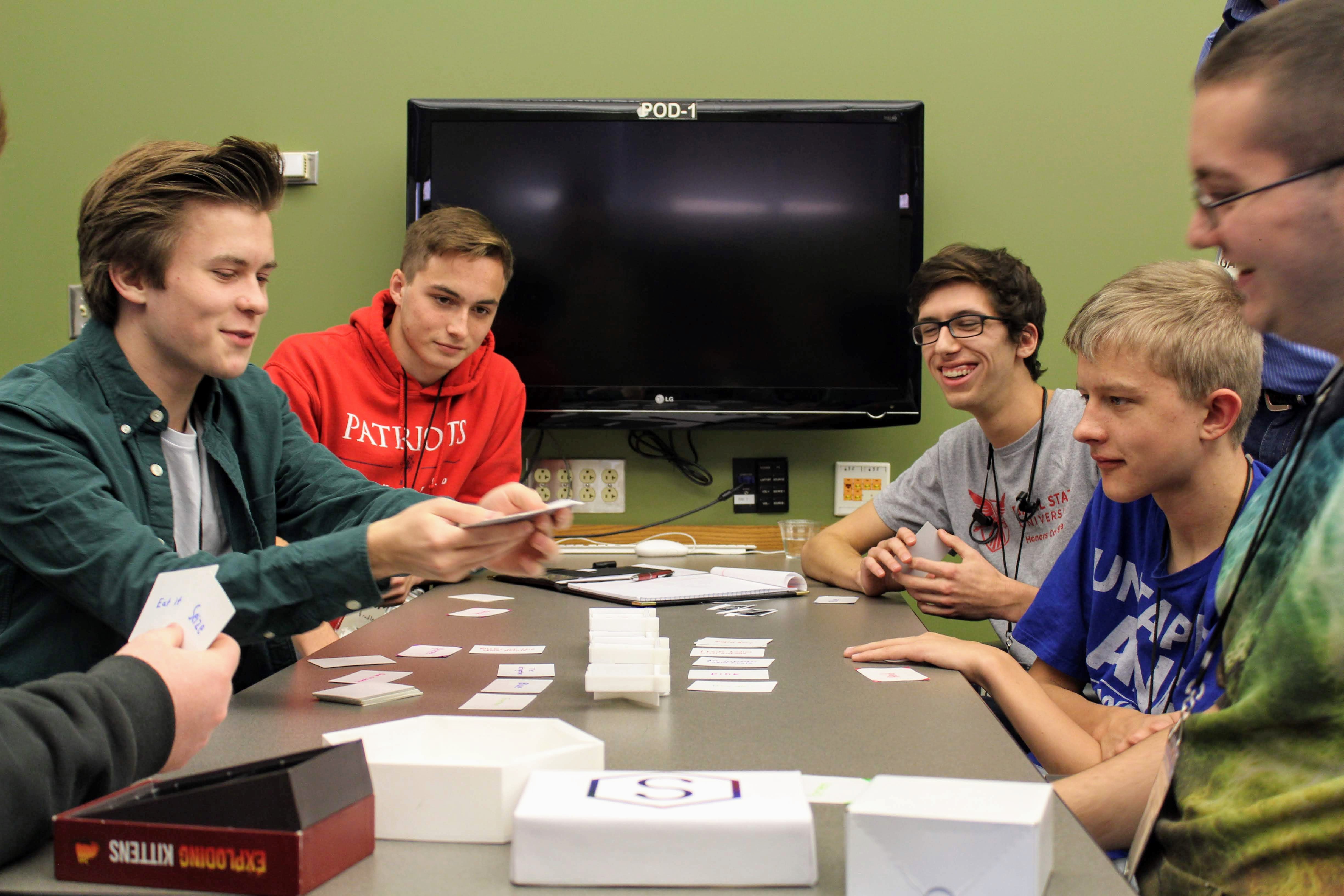 There were six different presentations at the Symposium. These academic presentations tackled topics such as player immersion in games, reading video games through a literary lens, and identity through video games.

In the first picture below, English department graduate student Kyle Stewart presents on his study about the connection between an individual’s identity and their D&D character, titled “Me, My Character, and My Avatar: Gaming Characters as Forms of Self Literacy.” The second picture is during a presentation titled, “Developing Resilience in Young Cancer Patients through Participatory Game Design.” 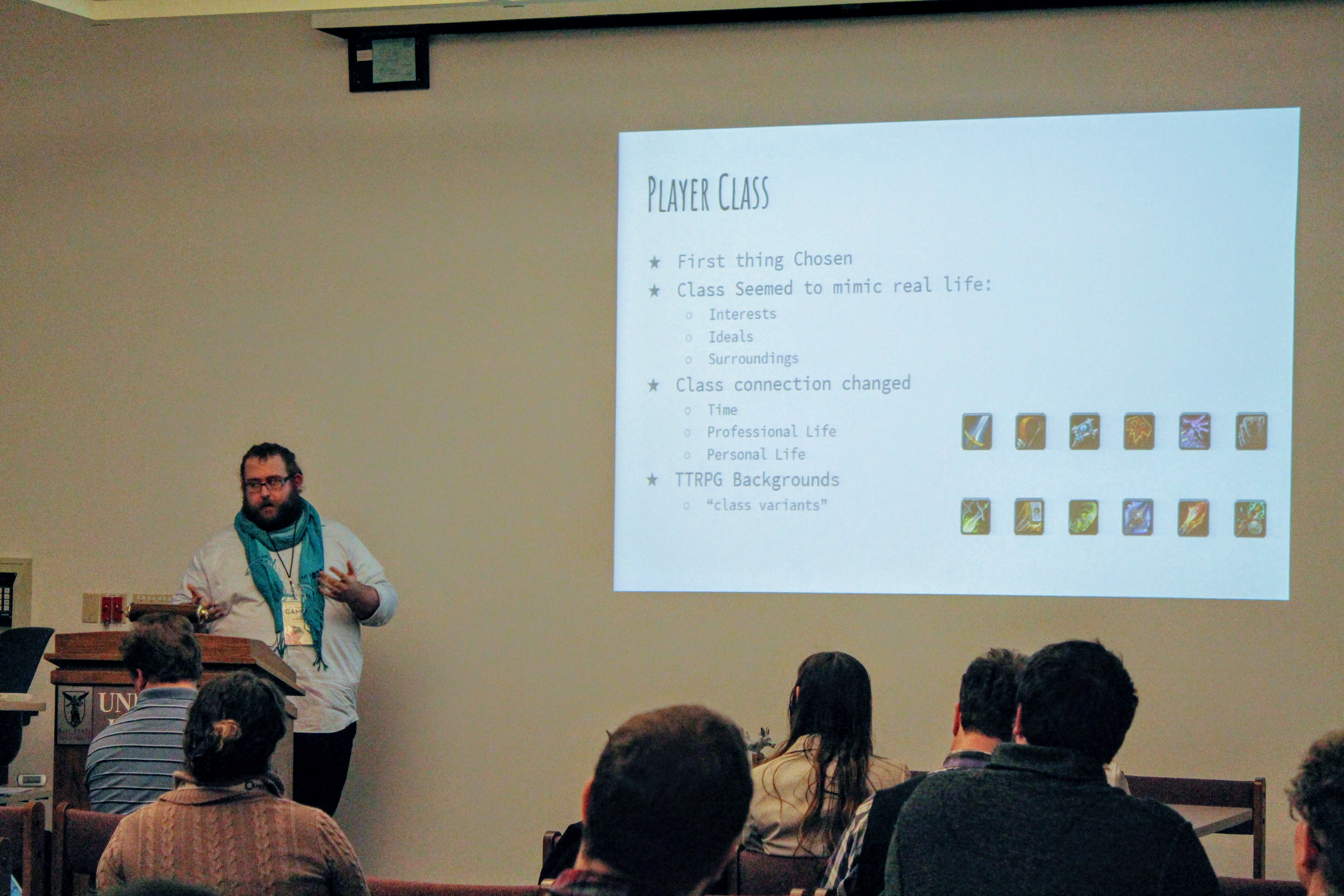 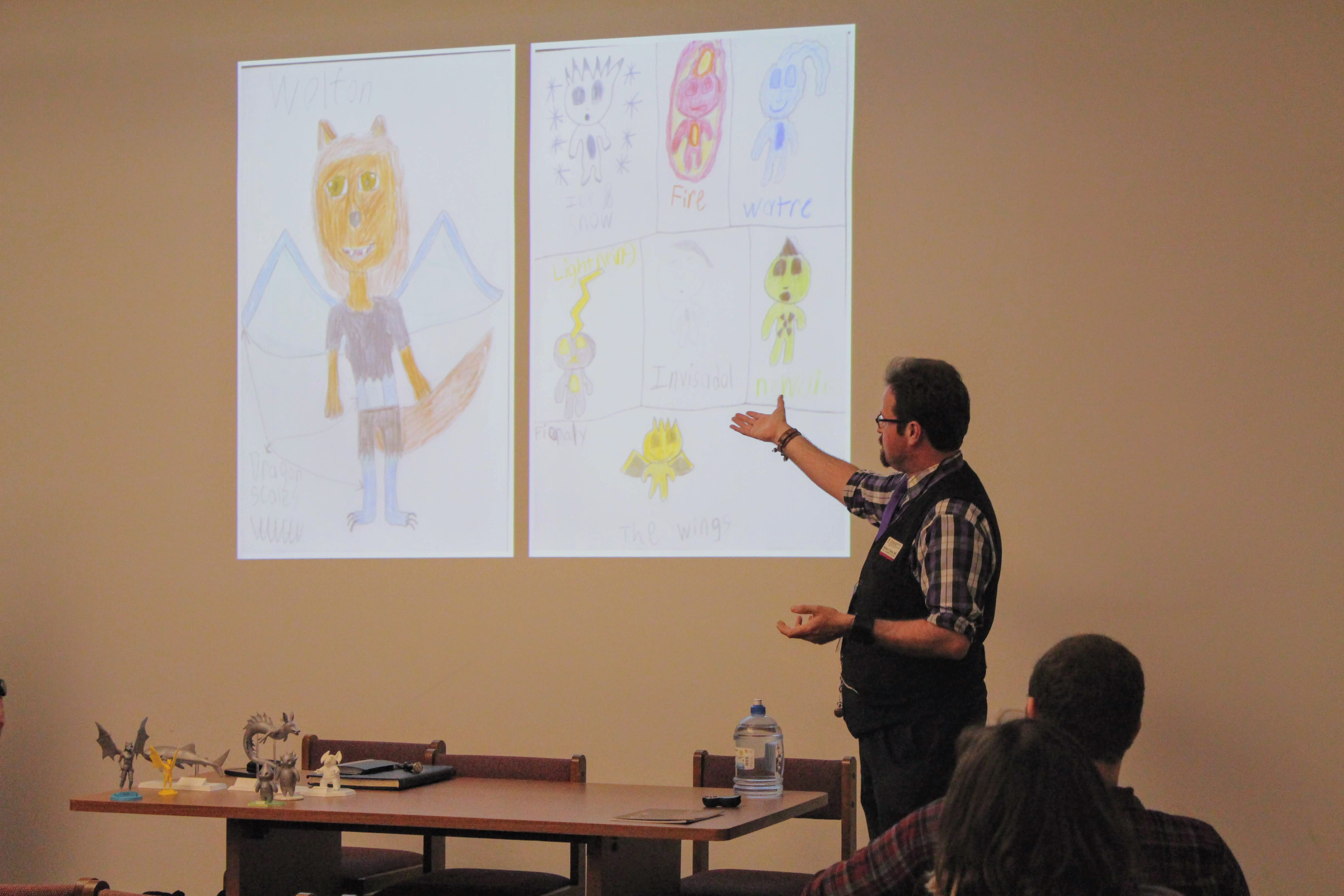 The third track of content at the Symposium was two workshops. The first workshop in the two immediate pictures below was “20,000 Leagues Under the Sea – An Escape Room Game for Training,” led by the Career Center. The students were divided into two different teams competing to complete the escape room first. The second workshop, in all of the following pictures, was “Rapid Prototyping: Make a Fairy Tale Game,” a collaboration between Paul Gestwicki, BSU Computer Science faculty, and George Buss, Director of Experience and Education at Minnetrista. The students were divided into several small groups and given the task of creating a Fairy Tale based game in a compressed time frame using only the assorted objects on the table. 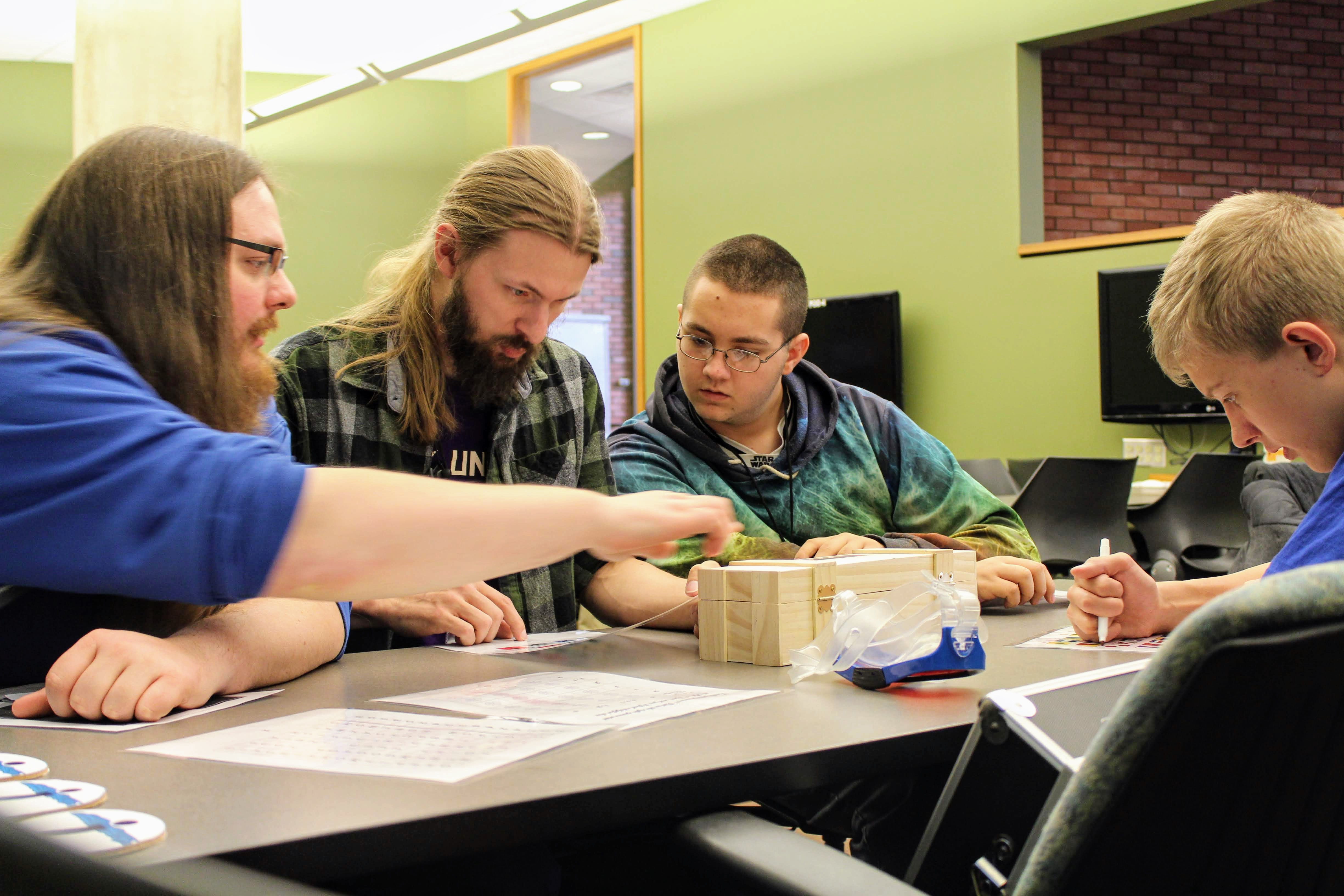 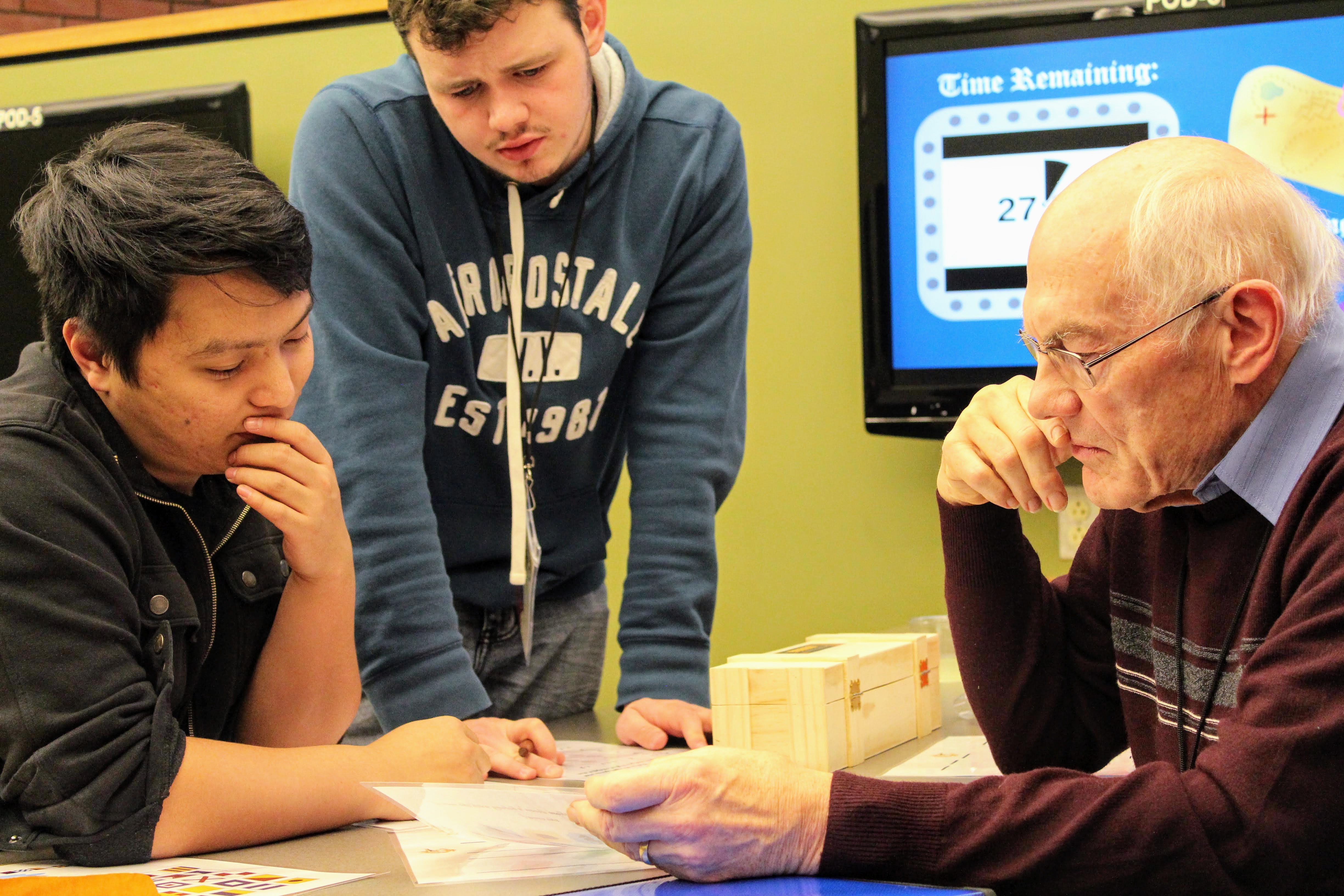 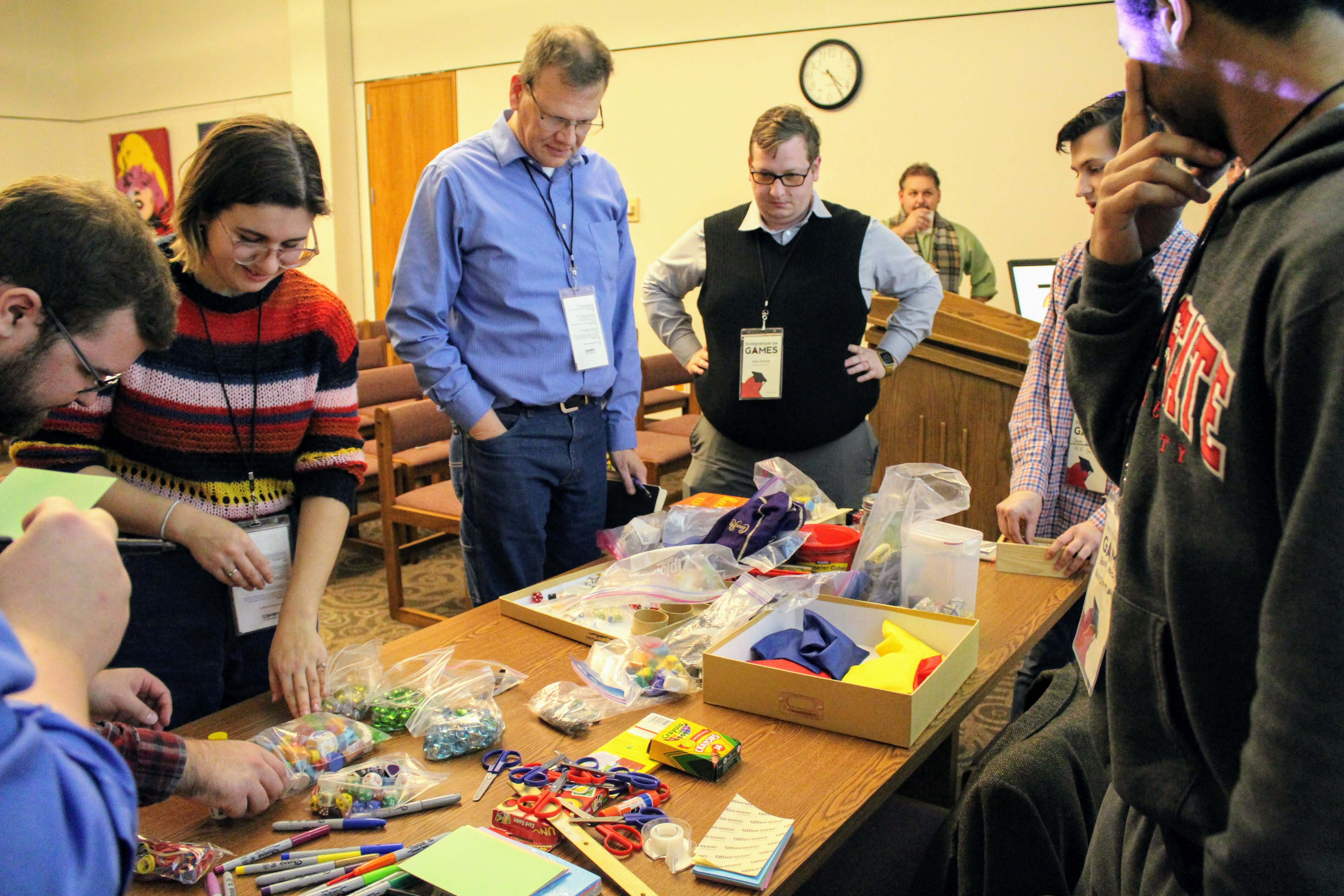 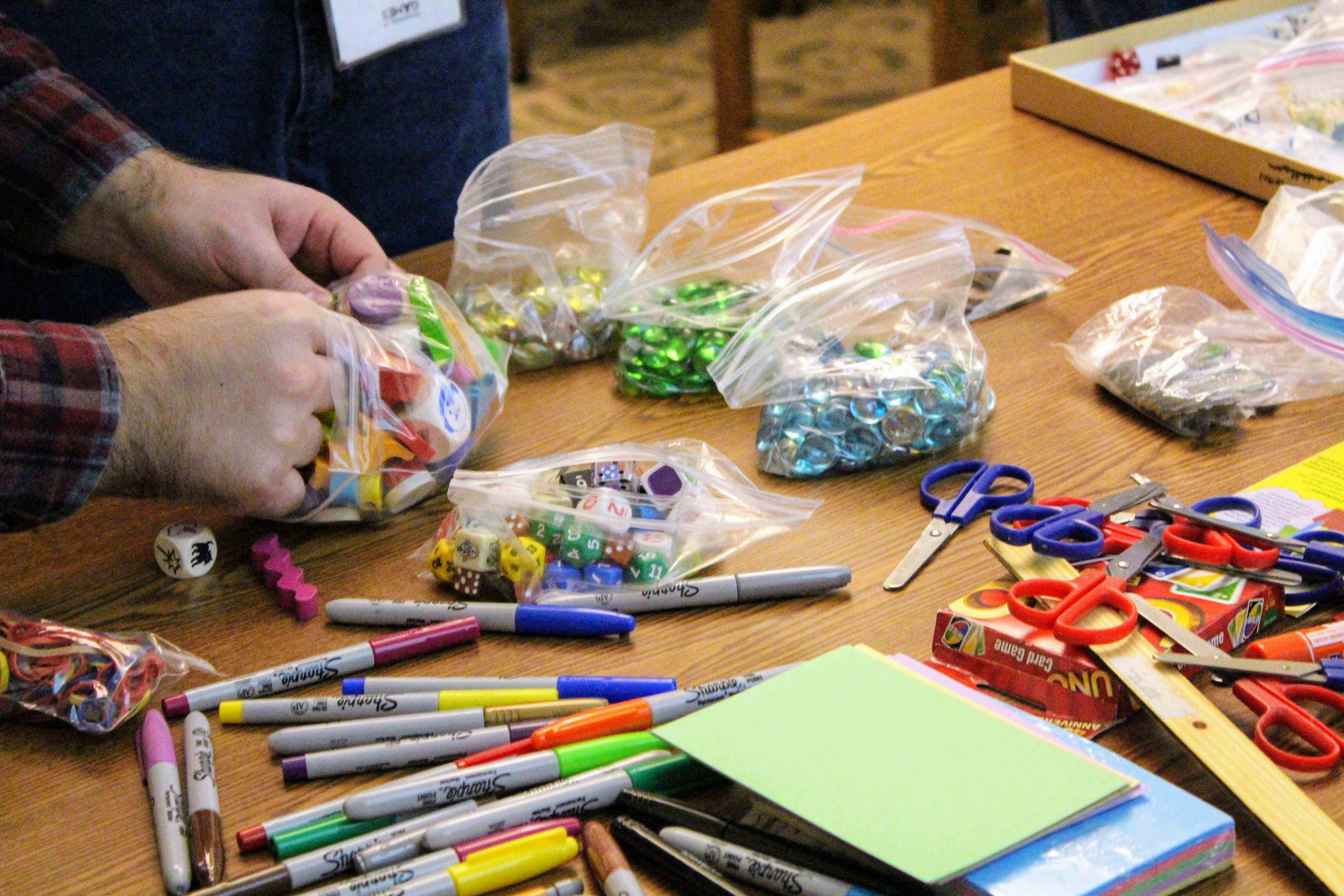 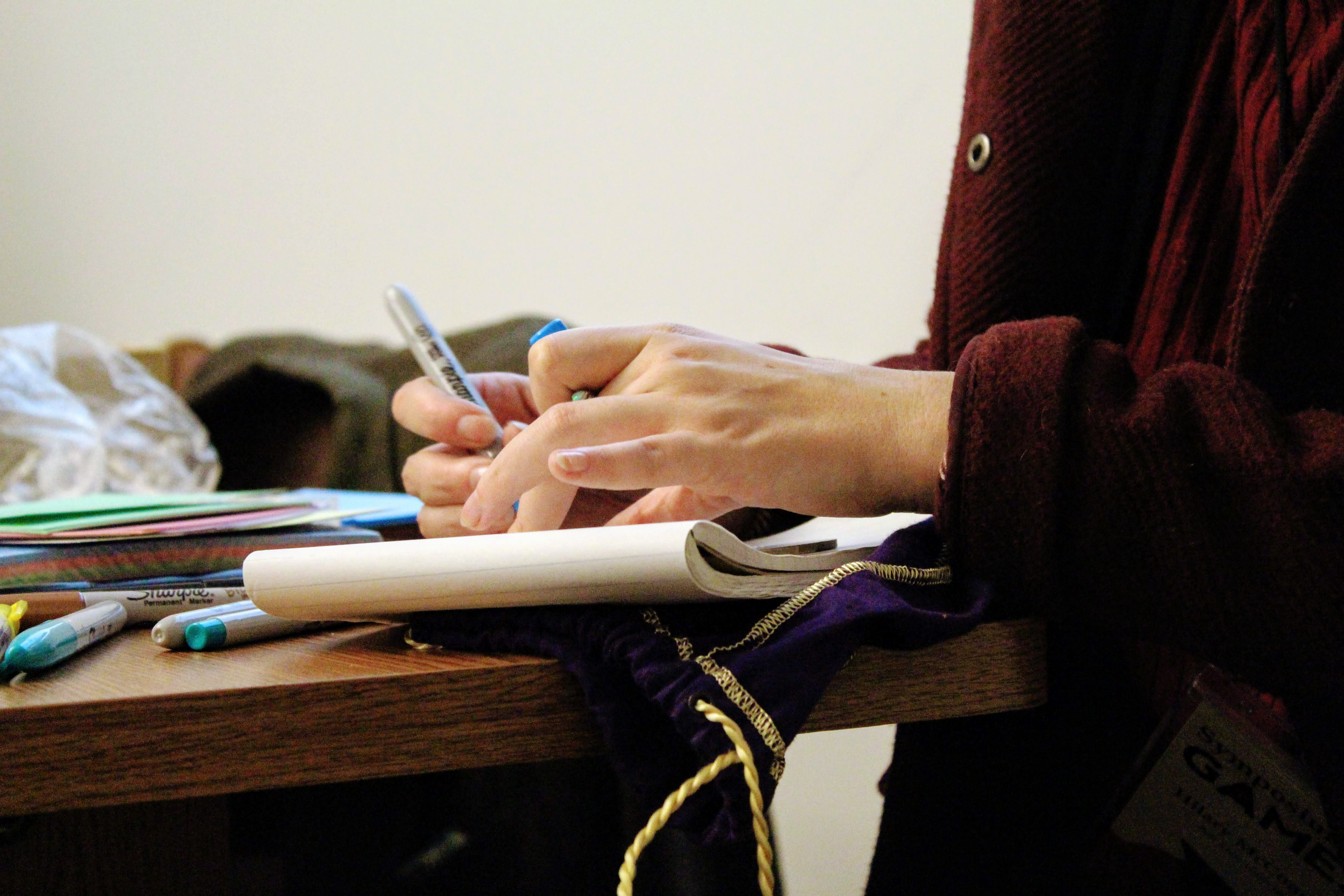 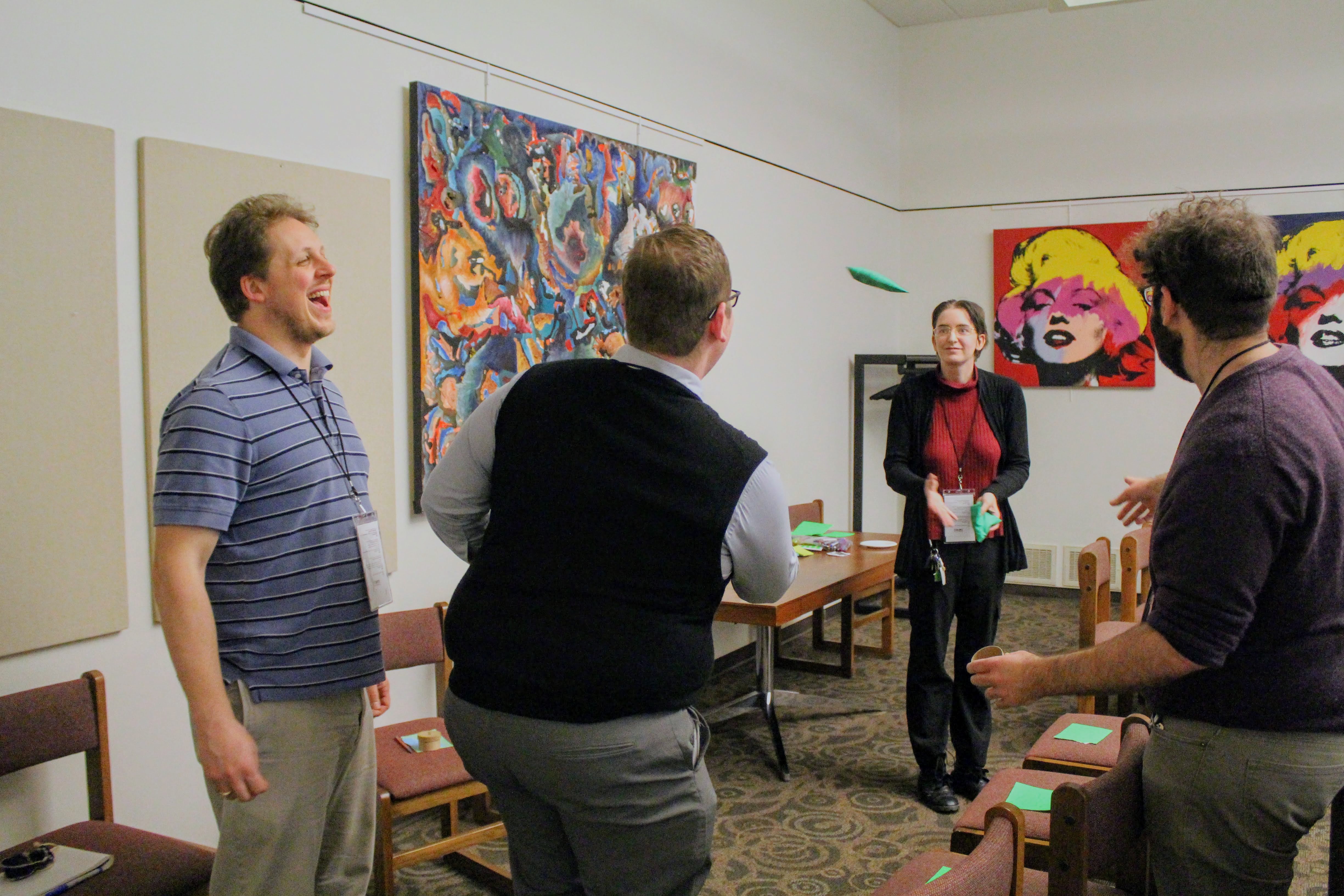 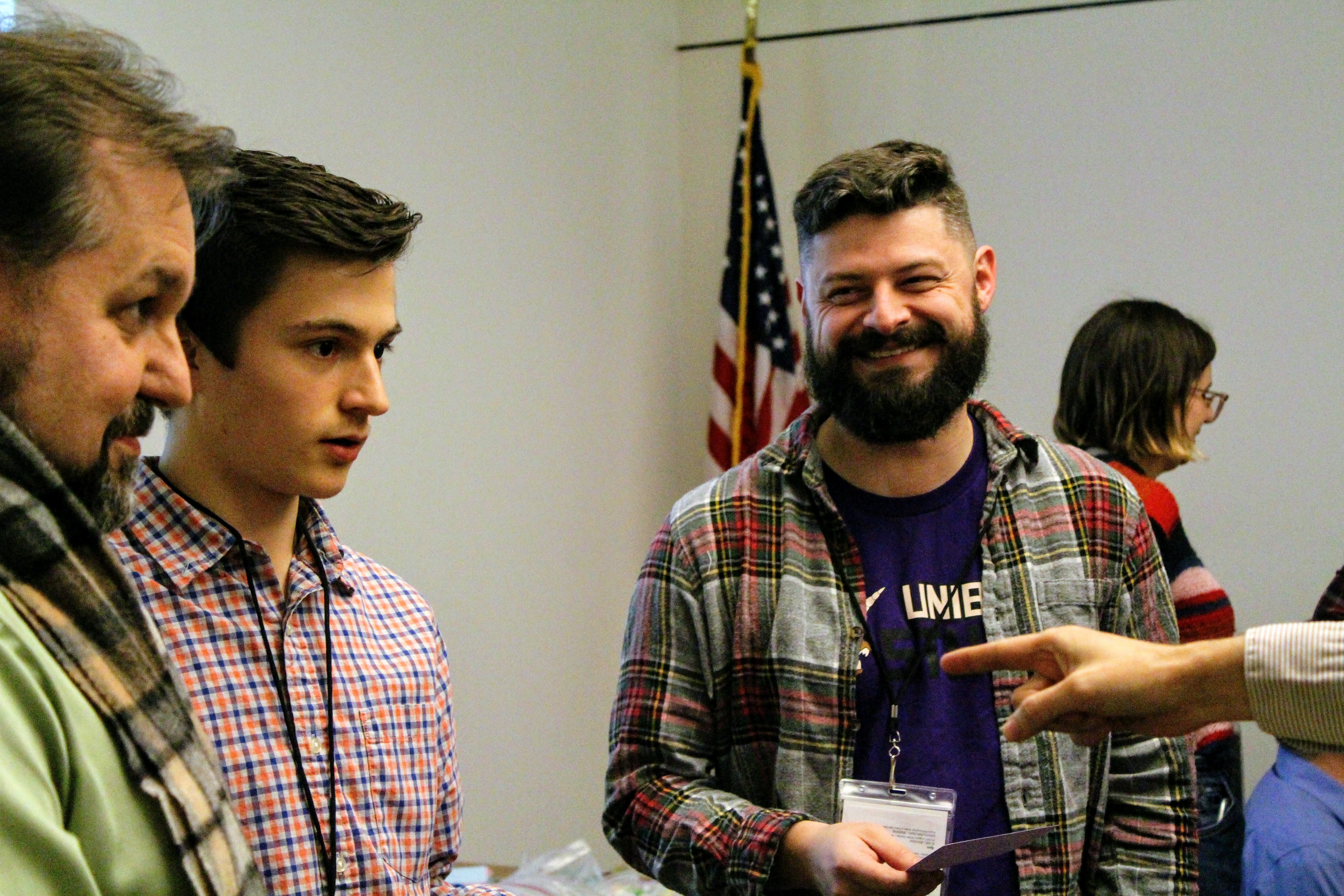 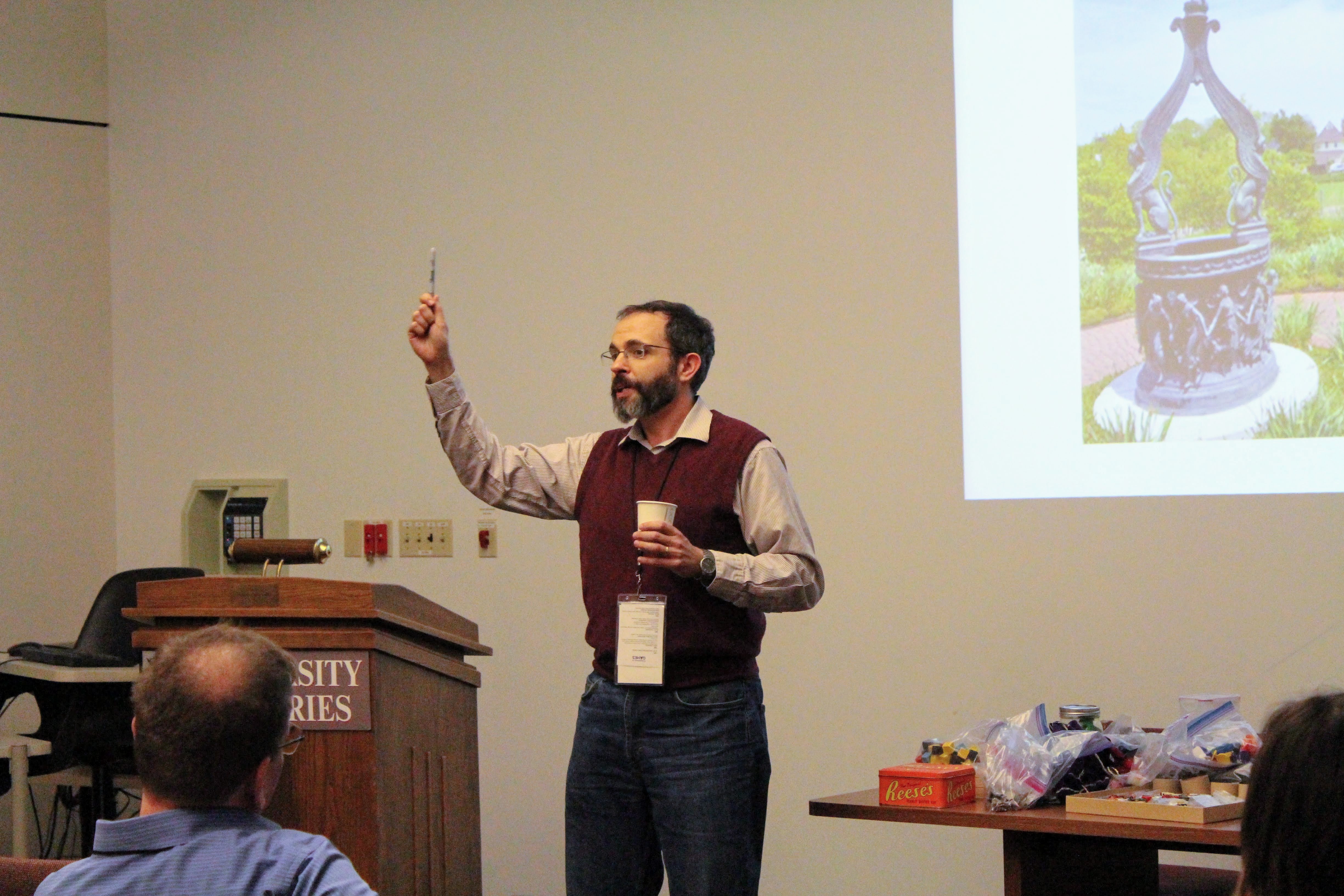 Pictured above is Paul Gestwicki of the Ball State Computer Science Department, organizer of the Symposium. If you’re interested in game studies, design, or development don’t hesitate to reach out to him and chat. He is a great resource and always open to talking to interested students.

The Symposium is held every other year, so be on the lookout for the next one in 2021!