On the third floor of the Student Center, students trickled into a large classroom while Professor Jill Christman recounted her family’s misadventures at a local apple orchard. In a humorous tone, seeping with sarcasm, she told them of the orchard’s disappointing visual aesthetic and the lack of activities, namely the fact her kids were unable to pick apples – at the apple orchard. She concluded by describing the apple donuts, the one positive part of the experience, and then offered the class extra donuts that she had brought just for them.

Whether in the classroom or in her writing, Jill Christman is always an engaging storyteller. Which is why she is the 2019 winner of the Outstanding Creative Endeavor award for her nonfiction writing, part of the Outstanding Faculty Award series. In addition to numerous essays being published in foremost magazines, Jill Christman has published books: an award-winning memoir Darkroom: A Family Exposure (2002) and the research focused mini-memoir Borrowed Babies: Apprenticing for Motherhood (2014).

Leaving her students in the class to eat donuts and begin their work, we recently sat down to discuss the creative work that led to her winning this award.

You currently have two published works, Darkroom and Borrowed Babies, can you talk about your inspiration and process for those books?

In 1995 I was in an MFA program at the University of Alabama, at the time it was a fiction program. But I started to write Darkroom under cover of night, because I just did not understand my material well enough to write fiction about it. My material it turns out was traumatic memory, and Darkroom is an attempt at creating an identity through the writing of the book after a really fragmented and traumatic childhood. And it worked, it really worked. Darkroom was definitely the first book I needed to write, and the University of Alabama was kind. When it was time to write my thesis, they let me polish it and submit it as my thesis. I believe that Darkroom was the first memoir ever to come out of the Alabama program – which does now have a nonfiction track as most MFA programs do. Though it wasn’t a thing at the time. So, Darkroom was my first book and it was published the year I arrived in 2002 at Ball State,

It is an attempt at creating an identity through the writing of a book.

Borrowed Babies actually came out of Alabama as well because in a workshop Michael Martone once randomly said, ‘…when they brought the babies in to the home economics program at Cornell…’ and I couldn’t forget about it. The idea is that beginning in 1919 in order to give students in home economics programs, who were studying the science of motherhood, a capstone program, the University had these apartments and the students would live there for six weeks. Each of the students had a role and someone had to take care of the babies, however they didn’t have any babies. So the University started getting them from orphanages. It happened here at Ball State – most land grant institutions had one. After years of thinking about this, I called Cornell and they confirmed the story. So, I applied for a fellowship and went. Borrowed Babies came out of my trip to Ithaca, where I had landed myself pregnant at the same time as I was down in the archives. First it was an essay, then it was expanded to it a book, and then it inspired a play (written by Ball State faculty member Jen Blackmer).”

What is your current creative project? 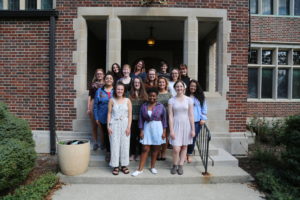 Often my creative work dovetails as a teacher and an administrator here at Ball State. That’s always been important to me. It’s a way to a have genuine synthesis in my professional and creative life. This class for example, “Rape Culture in the Age of #MeToo,” an immersive learning class sponsored by the Virginia B. Ball Center for Creative Inquiry, came out of writing “Slaughterhouse Island”, which is an essay that was published in Roxane Gay’s Not that Bad: Dispatches from Rape Culture (2018).

Our college campuses are just as dangerous for gender-based violence as they were thirty years ago.

It was in writing that essay that I realized that it was unconscionable of me to know that in the thirty years since my own rape at the University of Oregon, nothing had changed. That our college campuses are just as dangerous for gender-based violence as they were thirty years ago, and I end the essay by saying that’s not acceptable. It’s not acceptable. And so that’s when I decided to develop the course. I’m hoping to make it apart of the regular curriculum here and moving forward nationally. Ultimately, we need to get everyone involved, of course. We need to have these hard conversations about difficult subjects.

Professor Christman was the first tenure-track faculty to be hired for the creative writing program in the English department and has been pivotal in its success. As one of her nominators wrote, “she has been the driving force in building up a fledging creative writing program into the largest of the concentrations in our thriving undergraduate major.” From her honest and vulnerable writing to her campaigns for social change, Jill Christman is a force to be reckoned with. As she says, “Art should lead to social change, and as teachers we have a responsibility to bring those things together.” You can find Jill Christman in Robert Bell and her immersive learning class at indeliblepodcast.com.

Learn more about our other faculty awardees by checking out these posts featuring Patti Lang and Jackie Grutsch McKinney.