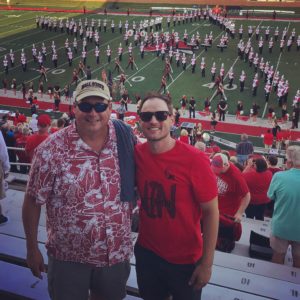 Social media is interwoven into the fabric of our lives. Most likely you were just on Facebook or Instagram a few seconds ago, or within the past hour. This is not a critique, but just a rather obvious statement. Social media is part of how we communicate and interact with the world. But you already know all this, you have heard it a thousand times. You live it. But what you may not know is how social media can influence your perspective of the world.

Dr. Jonathan Intravia of the Criminal Justice and Criminology Department researches media consumption and public opinion, with goal of bringing “awareness to how the Internet and social media can (or cannot) shape our views on topics related to race and crime.” Knowing that most of middle-aged and below individuals consume and engage with information through social media more frequently than newspapers, radio, or even television, Dr. Intravia is interested in how that influences our worldview. He has written articles on the correlation between social media and increased fear of crime, attitudes towards police, and the way we think about punishment of criminals. One of his articles focuses on racial stereotyping online, finding that “people that consume more news on social media are more likely to stereotype African Americans as criminals.” This finding is not consistent with Internet use (without social media), which had no effect on racial stereotyping. He acknowledges that more research on the effects of social media behaviors need to be conducted, but the take-away is that we all should be aware how our social media use and engagement could be encouraging racial stereotyping.

Dr. Intravia’s recent research has focused on the NFL protests and the controversy surrounding Colin Kaepernick. A quick recap: in 2016 Colin Kaepernick knelt during the National Anthem as a way to call attention to the issue of police brutality and racism. Many other players followed Kaepernick’s example, with the protest peaking during the 2017 season. In 2018, the NFL approved a new policy requiring all players to stand. For the public the issue was divisive, with some supporting the players right to protest and others calling the protests unpatriotic. Being a big sports fan, Dr. Intravia was drawn to research this controversial subject:

“One of the great features of our country is having the right to free speech, and this includes protesting. What motivated our research on the NFL protests, and specifically Colin Kaepernick, is the manner by which the protests were being done. They are not being done picketing outside a courthouse or peacefully protesting in a park, they are being done on a national stage where you have potentially tens of millions of people seeing it, during the national anthem. The protests were peaceful: kneeling with one knee on the ground, sitting on the bench and not standing up, and some protested by standing up raising their fists in the air….Are some types of protest taboo or violate social norms, compared to others? Why have the NFL anthem protests divided us as a nation?”

After researching public opinion on the NFL anthem protests, Dr. Intravia and his colleagues found that it was divided along racial lines. A significant majority of African American respondents supported the protests, and all of them were against punishing players. Among non-African American respondents, however, the support for protests was less than forty percent. These findings on public opinion point to the deeper reason that the protest are divisive and controversial, the issue of racial inequality in our country.

At the end of day, Dr. Intravia concludes, “With the NFL anthem protesting research, and future public opinion pieces, I hope that the research helps facilitate discussions for meaningful conversation. Without meaningful conversation, we cannot create meaningful change…. I just hope my research sparks important conversations that can work towards long-term solutions to eradicate social issues such as racial injustice and police brutality.”

Dr. Jonathan Intravia started at Ball State in August of 2015. He received his Ph.D. from the College of Criminology and Criminal Justice at Florida State University. His work has been published in Criminology, Youth Violence and Juvenile Justice, Crime and Delinquency, and the Journal of Youth and Adolescence. He teaches introductory to policing and criminology.