The Department of History’s Annual Student History Conference is one of it’s most important events. History students are encouraged to share research in the form of papers, teaching units, and multimedia presentations prepared for history courses with interested students and faculty.

The 22nd annual Student History Conference was on Friday, February 22nd. In addition to research papers, the SHC Committee welcomed digital history, public history, and oral history project submissions. Cash prizes were awarded, along with the possibility of publication in The Burkhardt Review graduate student journal.

The graduate award winner was Katy Evans. She was an MA student at Ball State before moving onto the University of Illinois Chicago for her PhD studies. Her submission was an excerpt from her 2018 Ball State University Master’s Thesis entitled “Construyendo la Mujer Nueva: The Image and Reality of the Revolutionary ‘New Woman.’” 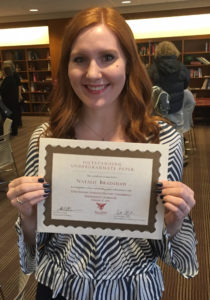 Natalie Bradshaw’s “The Degradation of Working-Class Status in Industrial France” won the best submission in the Undergraduate category.

The undergraduate award winner was Natalie Bradshaw. She is now a senior history and social studies education major, as well as a student in the Honors College.

Natalie Bradshaw’s “The Degradation of Working-Class Status in Industrial France” won the best submission in the Undergraduate category. The essay traced the evolution of the working-class experience in nineteenth-century France.

By examining the history of industrialization in France and the personal experiences of workers, Bradshaw concluded that the shift from skilled to unskilled labor devalued workers’ social status and ability to control their work environments, which shaped their self-perceptions and generated feelings of class-consciousness.

She used the memoirs of urban workers (compiled in Mark Traugott’s The French Worker: Autobiographies from the Early Industrial Era) to contrast working conditions at the start of the century and the end of the century. Much of her secondary source information came from Jeremy Popkin’s textbook, A History of Modern France.

So, my thesis was that the shift from skilled to unskilled labor devalued workers social status and ability to control their work environments which in turn shaped their self perceptions in generated feelings of class consciousness. And that’s a lot of words. Basically, I was talking about how using machines to produce goods made the need to know a skilled craft kind of unnecessary.

And so when workers no longer were valued for their talents or their abilities, then, you know,
industrialists started being able to treat them badly.

There was Social Security network for them to fall back on that the government provided so they started to look at each other, because they were all they had–their fellow workers–all concentrated in one space in a factory.

What’s a really fun fact that you found in your research?

I found out the Tour de France is based on the circuit that the workers would take as they were learning their skills, the journey men. And so the journey man would actually join like, they’re called the companions, but it was like a fraternity in a lot of ways. Their brothers would support them and help them find jobs, but they even had their own way of dressing. If they were passing someone from another fraternity, they wouldn’t engage because brawls would often happen that way.

How do you think the student history conference contributes to community in history department?

I think being able to share the joy of researching and the joy of uncovering these really cool things and just what we’re interested in researching is what really helps create the community.

What was your favorite part of the conference?

Yeah, I liked that they formed panels with our different work and put us together. I liked seeing how the panels were formed from these papers that seemed so different, but fit into one theme. Then the discussion and conclusions based on these different papers was so cool–I was with one grad student from Michigan, and his paper was about women who were big game hunters. Mine was about French workers and at first I thought, how does that work together? But, the theme was the outsider. So we were looking at societal outsiders and it was really cool.

Keep an eye out for the call for submissions for the 2020 Student History Conference!