This year Ball State is celebrating its 100th anniversary. Please watch the story of our proud past in our magnificent student-produced documentary, “From Normal to Extraordinary: Ball State’s First Century” that covers the University’s history since its founding in 1918. Dr. Bruce Geelhoed, professor of history, has been researching and writing about Ball State’s history since the early 1990’s, and has published two books on the subject.

In 1993, the University celebrated its 75th anniversary. At that time, the provost and historian, Dr. Warren Vander Hill, wanted to celebrate the history of Ball State with a new publication that would provide a scholarly appeal. As the Director of the Center for Middletown Studies, Dr. Geelhoed seemed like a natural choice to lead this project. He teamed up with another history professor Dr. Anthony (Tony) Edmonds. Their challenge was to produce a factual and accurate picture of Ball State’s history. Their goal was for it to be valued, not only by the Ball State community, but also to contribute to the history of education in Indiana, and the United States. They published “Ball State University: An Interpretive History.” Twenty-five years later, it is clear that Dr. Geelhoed is still passionate about the history of Ball State and the significant events that have formed its story.

How it all Began

In 1899, a small private teacher training school opened in Muncie. After failed attempts to remain open, the Ball family backed the fourth attempt to establish higher education in East Central Indiana. They bought the land and the buildings of the private school and donated them to the State of Indiana. This gift became the Indiana State Normal School Eastern Division, which opened in 1918.

Dr. Geelhoed perceives the 1920’s and early 1930’s as a pivotal time for Ball State. L. A. Pittenger had a close relationship with Frank C. Ball. Pittenger held a seat in the State House of Representatives (1922, 1924, & 1926) and sat on the Ways and Means committee. With his encouragement, the Indiana General Assembly separated the budgets of Indiana State’s two campuses and formally established Ball State Teachers College in 1929. Winfred E. Wagoner used his good business sense and forged a path for the expansion of buildings on campus. Dean of the Teachers, Ralph Noyer focused on building academic programs. The combined ambition of these men helped Ball State jump-start its chance for a successful future. 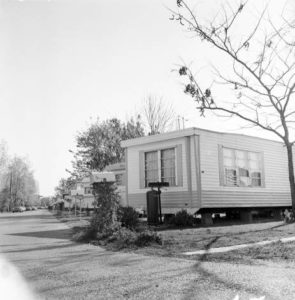 Many other leaders have contributed to the University’s growth. If you spend just a few minutes with Dr. Geelhoed, you will find he is always willing to share one or two stories with you! Recently, he shared a little about his own arrival at Ball State, as a graduate student. In the 1970’s, Ball State had a neighborhood in the middle of campus, the Ball State Trailer Court, created to accommodate married students and their families. The trailer court had a playground and on site laundry facilities.

As a graduate student, Dr. Geelhoed and his wife owned one of these trailers. He fondly recalls his time there, remembering neighbors, the cost of living, and the memories his family made while there. On February 22, 2019, at the Student History Conference, Dr. Geelhoed will deliver the keynote address. His talk entitled “The Neighborhood in the Heart of Campus: The Ball State Trailer Court,” will examine married student life in the era of expanding enrollments and social change. The talk will start at 11:00 am in the Student Center Ballroom. This event is free and open to the public. You can learn more about the Student History Conference by visiting the Department of History.

Follow the celebration of Ball States 100 year anniversary at bsu.edu/100.