Seventy-eight models lined the hallways in the College of Architecture and Planning as students presented their entries for the annual MKM Design Competition this spring. The competition, sponsored by MKM Architecture + Design, asked Ball State students in the third-year architecture cohort to come up with creative design solutions using steel. This year students were asked to design a place people could come together in downtown Cincinnati. 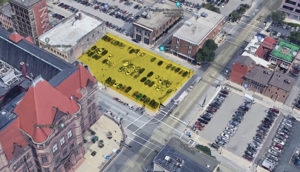 The site selected for the MKM competition was a parking lot near Cincinnati City Hall.

MIXED USE DEVELOPMENT WITH COMMUNITY FOCUS

As their assignment, students were given the goal of creating unity: “In recent years we have witnessed both COVID and politics creating more division among many communities. To encourage more togetherness and commonality, students were asked to develop architecture that could help bridge such divisions. The structure should include a community center with the incorporation of a plaza or space for free and open gatherings, should propose unique, appropriate, and dynamic architectural solutions, and should also feature creative steel uses and innovative techniques. This new center should be considered a new landmark for Cincinnati with a place for all voices to be heard.”

Project statement:
In 2018, the American Lung Association conducted a study that placed Cincinnati on a list of
the 25 most polluted cities due to high levels of year-round particle pollution. These high levels
of pollution are likely a result of the surrounding coal-fired power plants which line the region, as
well as diesel emissions from Interstate 75 which surrounds the city. Exposure to such high
levels of particle pollution is putting the lives and health of the residents residing in and around
the city at risk of developing asthma attacks, damage to small airways of the lungs, and an
increased risk of lower birth weight and infant mortality.

The Urban Lung both raises awareness of this condition and helps to alleviate pollutants
through the introduction of a carbon-sequestering green oasis within the urban center. The
design employs living walls, food production, abundant green space and emerging sustainable
technologies such as moss screens to maximize Co2 capture. In addition, the unique design
creates a landmark that will both attract and engage and empower local community members. 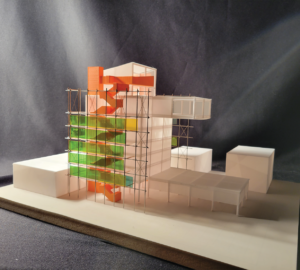 Project statement:
COLOR Cincinnati creates a vibrant street-level plaza defined by the building which is massed at the perimeter of the site. The project employs a system of colorful patterned metal panels designed by the architect, while leaving broad areas to be impacted by artists, community groups, and events. The site acts as a canvas for the community encouraging expression and a sense of ownership. Feelings of pride and belonging are brought to the people, and the well-being of humans is positively impacted through social interaction and the formation of relationships with those around them.

COLOR is a multimedia, multicultural location for all people to learn, collaborate, and engage with others through the expression of art. 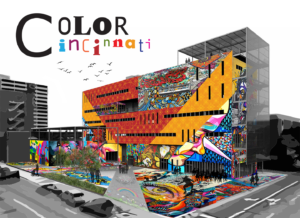 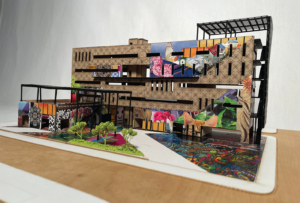