Tameka Wilson, winner of the Teachers College Young Alumni Award, earned a master’s degree in educational administration from the Department of Educational Leadership in 2012.

Some of her fond memories of her time at Ball State include catching plays at Emens Auditorium and cheering on the basketball team. She also appreciated Dr. Marilyn Quick pushing her to explore her greatness. 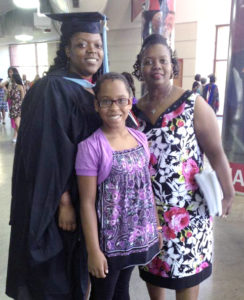 Her experiences growing up in a military family, and moving around a lot had an impact on her decision to become an educator:

“When you move around a lot, sometimes teachers don’t know what to do with you. So I became the kid who would talk too much – what people tend to label as a behavioral issue. One day in sixth grade I decided I wanted to be a teacher so that I could help every kid. I don’t recall until high school having one teacher who embraced me as a new student. I wanted to be a teacher and I wanted to be different. We all just want to have a voice, and I make sure that each kid has a voice in my classroom.”

After earning a bachelor’s degree in elementary education from Winthrop University, in Rock Hill, South Carolina, she spent the next few years teaching in schools in South Carolina before moving to Indiana.

After earning her master’s at Ball State, Ms. Wilson was a vital part to the development of Thurgood Marshall Leadership Academy in Fort Wayne. She started as an instructional coach and was then promoted to the principal in November of the first school year. She was given four years to redevelop, restructure, and redesign the startup school. In 2017, thanks to her leadership, the school was able to renew its charter.

While in Fort Wayne, she created a nationally ranked step team, the Chaotic Movement Mavericks, and won Coach of the Year two years in a row. 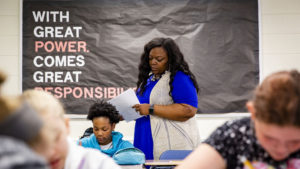 In June 2017, Ms. Wilson decided it was time to take a break from education for a year, to decide on her next step in life. She was determined to return to Muncie, and in August 2018, she was hired as a 6th grade math teacher at Southside Middle School. 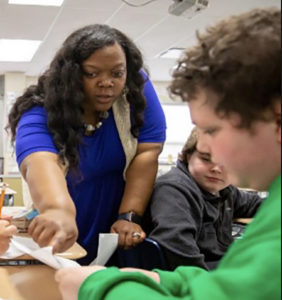 She is a strong believer in building relationships with students and makes a point to try to connect with each one.

“Each student brings a different perspective to the school day, and it is a joy to watch them flourish and grow throughout the school year. They keep me going.”

In August 2020, she was promoted to Assistant Principal of Southside Middle School, where she also serves as the Athletic Director.