Mr. Kristofer Scholtes, winner of the Teachers College Young Alumni Award, earned a bachelor’s degree in secondary physics and chemistry education, with a minor in mathematics education from Ball State in 2005. Seven years later, in 2012, he earned a master’s degree in educational administration and supervision from Teachers College.

He has fond memories of his time at Ball State:

“From meeting my future wife to being able to run on the cross country and track teams while I was there. My training as a future educator with some really good education professors. All of the time I had there culminated to a great experience while I was at Ball State.” -Kristofer Scholtes 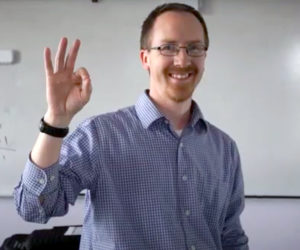 Mr. Scholtes began his teaching career at Muncie Central High School in 2005 as a math and science teacher. Over the years he worked his way up the ranks to become the chairperson of the Math Department. He served as the GEAR UP (Gaining Early Awareness and Readiness for Undergraduate Programs) Liaison, Advanced Placement educator, sponsor of the Mu Alpha Theta Math National Honor Society and assisted with all testing coordination at Muncie Central.

“During the time I worked with Mr. Scholtes I have found him to be very energetic, cooperative, professional, loyal, and most importantly, student oriented.  The support and cooperation he gives teachers, staff, and students is exemplary.” – Chris Walker

Mr. Scholtes has excellent educational leadership skills, and he has an ability to think outside the box by using technology and other engaging concepts with students. He can reach struggling students, as well as challenge and push the brightest students in AP Calculus classes. He is a model of hard work and dedication, and he uses compassion while reaching ALL students. These qualities earned Mr. Scholtes the Muncie Community Schools District Teacher of the Year award in 2019 and he was a state finalist for the Indiana Teacher of the Year award.

When asked, Mr. Scholtes shared his favorite part of being an educator.

“My favorite part of being an educator is working with students and pushing them toward their goals. I like being able to be a catalyst to their dreams and seeing them achieve them. I especially like the interactions I have with my students years after I have had them in my classroom.” -Kristofer Scholtes

At the end of the 2019-2020 school year, Mr. Scholtes left Muncie Central, and now works at Yorktown High School, where he teaches Geometry 1, Geometry 2, Algebra 2, Pre-Calculus, Brief Survey of Calculus, and AP Calculus. He also serves as the National Honor Society sponsor.

Mr. Scholtes stayed involved with track and cross-country after his time on the Ball State teams. At Muncie Central High School he was the assistant track coach for seven years, and was the head cross country coach for six years. In 2010 and 2011 he was named the NCC Cross Country Coach of the Year by fellow coaches.

He enjoys sharing his passion of running and physical fitness not only with his students, but also with his four children. 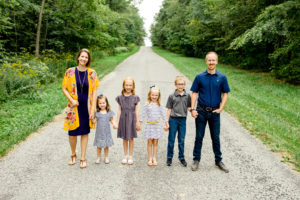 Kristofer Scholtes with his family.