World-renowned Russian/Soviet and Ukrainian historian, Dr. Sergei Zhuk has led a distinguished and prolific academic career. With expertise and research specialties in Cold War history, popular culture, international relations, knowledge production, cultural consumption, religion, and identify in a history of imperial Russia, Zhuk began his career in Soviet Ukraine as a US colonial historian (an “Americanist”) earning his Ph.D. from Moscow’s Institute of World History at the Academy of Sciences of the Soviet Union.

Zhuk’s research expanded to pre-revolutionary Russian and European history while obtaining a second Ph.D. at Johns Hopkins University, and today he is lauded as a leading Cold War historian. With early influences from American literature, film, and music of the 1960s, Zhuk’s breadth of study provides a unique and prodigious perspective unmatched in his field. William Pomeranz, J.D., Ph.D., Director of the Kennan Institute at the Woodrow Wilson International Center for Scholars writes of Zhuk: “Indeed, I know of no scholar who has worked his way up the career ladder in two distinct educational systems and then subsequently combined this expertise to impact both his native land and his new country.”

As a young boy, Zhuk was captivated with American-made history films like the epic historical drama, Spartacus, directed by Stanley Kubrick and released in 1960. From ancient Greek and Roman conflicts to battles of the Persians, Zhuk’s childhood fascinations with films depicting rivalries and oppositions served as one inspiration for what would become his lifelong passion for history and the pursuit of truth. He grew up primarily with his mother and was regularly exposed to all styles of literature through her profession as a librarian, which Zhuk said had a meaningful impact on his development and career trajectory.

Zhuk fell in love with the English language during his early years of secondary school in Soviet Ukraine. However, he found his classroom teacher of English to be lackluster (in fact, “bad”) and was motivated to seek more meaningful instruction. In December 1965, individuals by the names of John Lennon, Paul McCartney, George Harrison, and Ringo Star became Zhuk’s “first” and much preferred English teachers thanks to his brother who bought their first cassette tape of the influential band.

Western music continued to be an early inspiration in Zhuk’s life. From the Rolling Stones and Creedence Clearwater Revival to the Doors and rhythm and blues artists like Muddy Waters, this music genre had a significant impact on Zhuk’s desire to examine the influence of popular culture on his native Ukraine. By his late teens, Zhuk had also become fascinated with British Colonial history, indigenous cultures, and authors including James Fenimore Cooper, Edgar Allen Poe, and Nathaniel Hawthorne. This attraction to Early Modern America served as the entry point into his post-secondary studies.

As an undergraduate, Zhuk continued to explore and critique the world around him and enjoyed listening to the BBC and Radio Luxembourg as a young man. During these broadcasts, it was the commercial breaks that began to hone his critical thinking about the regime under which he lived in Soviet Ukraine, as his understanding of authoritarian systems deepened and matured. Around this time, he began working as a DJ at local clubs in Dniepropetrovsk and loved to play popular western music for his audiences. KGB officers controlled all of the clubs where he worked, and Zhuk quickly recalled that the officers did not like him because he played what was then considered “forbidden” music, including AC/DC and Kiss.

A Tale of Two Continents

While Zhuk was continuing his studies as a graduate student in Moscow, he met Nikolai Bolkhovitinov, an open-minded, westernized scholar who would become a close colleague and mentor for Zhuk. Bolkhovitinov had extensive networks and collaborators in the US, including connections at Indiana University, Stanford, and Michigan State University, among others. Through their friendship, Zhuk eventually met Jack Greene, a professor of Colonial American history at Johns Hopkins University. When the KGB lost control of where he was living in Ukraine, Zhuk was able to travel to the US and visit Johns Hopkins with his wife Irina and their son Andrey.

A desire to relocate to the US had been established, but it was Zhuk’s Chernobyl experience that solidified his desire to move his family to the US. Zhuk shared that the Soviet police drafted “everyone” around this time, and he was placed in a three-month operation to protect property on the remote outskirts of the Chernobyl site. Neither Zhuk nor any other individuals working had the proper equipment to protect themselves during these operations. There were fears of looting, and some of his assignments included removing pets and animals. After this experience, Zhuk knew he would bring his family from Ukraine to the US, as he feared staying would guarantee an army assignment for his son. 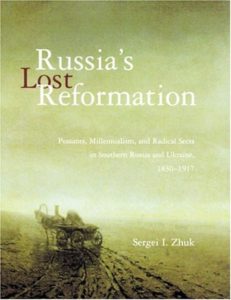 When Zhuk arrived in the US, he was advised by his mentors that he would need additional academic training. As noted, he began working on a new degree at Johns Hopkins University earning a second Ph.D. in Soviet and Eastern European history focusing on Evangelical peasants in Ukraine. These were Mennonites and Lutheran Germans, many of whom immigrated to the United States, particularly to Kansas, and also to Canada. This line of research later led to Zhuk’s publication, Russia’s Lost Reformation: Peasants, Millennialism and Radical Sects in Southern Russia and Ukraine, 1830-1917.

Once Zhuk received his Ph.D. from Johns Hopkins University, he began the process of applying for teaching positions at colleges and universities across the US, receiving compelling offers from a variety of institutions. His work even attracted the attention of some schools of divinity, given his research focus on religious sects. However, one offer that particularly garnered his attention came from an institution he knew little about, aside from its School of Music and affiliation with famed comedian, David Letterman. Zhuk recollected that he received a “very good offer” from Ball State University and was drawn to the 2­–2 teaching load that was offered to him as an incoming assistant professor. As he settled into his new position, Zhuk continued his research on Ukrainian Mennonites, their journey to the Midwest, along with his previous work on American Colonial History, specifically the exploration of the Amish and Quaker communities.

The Words Want To Be Written

As the author of eight books and more than 80 articles on East European, Russian, and American history, Zhuk’s colleagues note his vast knowledge base and extensive contributions to the scholarly community worldwide. Denise Youngblood, Ph.D., Professor of History Emerita, The University of Vermont comments on Zhuk: “No one can write knowledgeably in these fields without citing his work; his influence has been considerable and will continue to grow as Ukraine’s geopolitical importance can no longer be ignored.” 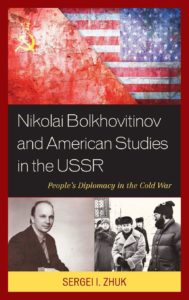 When his mentor, Nikolai Bolkhovitinov, died of cardiovascular problems, Zhuk recalled his promise to Nikolai’s wife to write a book about him. This publication, Nikolai Bolkhovitinov and American Studies in the USSR: People’s Diplomacy in the Cold War, is a biography of Bolkhovitinov’s influence as a scholar of US History and US-Russian relations and depicts Russia’s animosity towards Ukraine. Further, the work examines the extent to which the KBG sought to infiltrate the US not only through political means, but also through targeted scholarly and academic placements.

With the exception of last year, Zhuk, his wife, and son have spent almost every summer and Christmas vacation in recent memory with his wife’s family in Ukraine. During selected visits, Zhuk was able to gain unprecedented access to the KBG archives in Ukraine. These were secret archives, not previously open to the public, and Zhuk uncovered extensive information on the maneuverings of the KGB both inside and outside of Ukraine. This research, along with interviews from former KBG officers, is detailed in his most recent book published in April 2022, The KGB Operations against the USA and Canada in Soviet Ukraine, 1953-1991.

Aside from Zhuk’s impressive publication record, he has been the recipient of numerous prestigious awards, grants, and fellowships from institutions including Columbia University, the American Council of Learned Societies, the John F. Kennedy Institute for North American Studies in Berlin, and the Rockefeller Foundation Bellagio Center, among many others.

Over his lifetime, Zhuk has explored the power of place, identity, culture, and opposition. He seeks and uncovers a depth of inquiry that few, if any, have replicated to offer riveting insights about the world and the collective human experience. In closing, the words of Michael Zuckerman, Professor of History Emeritus, University of Pennsylvania best capture the breadth and importance of Zhuk’s body of work, by acknowledging that:

“These studies of American Studies in the former Soviet Union and the post-Soviet world are incomparably the frankest and the most insightful rendering we have ever had of the political pressures that controlled the construction of the official Soviet historical scholarship…They are also truly touching accounts of a tiny band of intrepid seekers of historical truth… They mingle irony and indignation, narrative and analysis, theory and telling empirical detail with exquisite artistry… Sergei was perhaps the only person audacious enough and knowledge enough to have carried off these works.”

*This feature story was written by Stephanie Roof and originally published in the Sponsored Projects Administration 2020-2021 Annual Report, which can be viewed here.