Moreover, Impressions of Love also served as a celebration of the Ball State Centennial. Winifred Brady Adams was Frank C. Ball’s sister-in-law, making her and John close members of the family whose legacy we celebrated in 2018–19. Though they did not carry the Ball family name, the Adamses shared the Balls’ generosity—a trait that, when coupled with the Impressionist couple’s passion for the arts, led them to become two of the founding members of the David Owsley Museum of Art (DOMA). It’s only natural that DOMA’s mission of lifelong learning and recreation in the visual arts perfectly encapsulates the legacy the Adamses built during their time in Muncie. 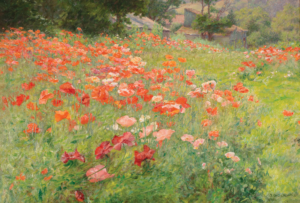 John Ottis Adams moved to Muncie during the Indiana gas boom after finishing his training in Munich, Germany. Being a patron of the arts, he quickly proceeded to teach in the area—a profession that introduced him to Winifred Brady Adams. Prior to their meeting, Winifred was academically trained as a still-life painter at the Muncie Art School, Drexel Institute of Art, and in the Art Students League of New York. She also had a passion for gardening and floral arrangements and was able to successfully combine her interests to create beautiful works of art. In the 1880s, the two began working together, and eventually married on October 1, 1898.

During that era, most marriages between artists involved a caveat: the husband’s work would often flourish while the wife would be pressured to forego the craft or at the very least stunt her aspirations. Fortunately, this wasn’t the case for John and Winifred. An excerpt from For Better or for Worse: A Short History of Married Artist Couples in Indiana by Martin Krause and Rachel Berenson Perry, states that “among the picturesque hills of Franklin County on the banks of the rapid Whitewater in the historic town of Brookville, the Adamses raised three sons and continued to paint and exhibit without noticeable interruption.” The couple’s aspirations continued undeterred, with each eventually having their own studio at a countryside home named “The Hermitage.”

The 90 paintings shown in this exhibition are a sampling of the work the two created throughout their lives—works that, before Impressions of Love, were all but hidden from the public eye. Of the 90 works on display, 28 belong to private collectors, meaning this could very well have been the first time some of these paintings were shown to the public. Moreover, 28 of the 90 works were created by Winifred. 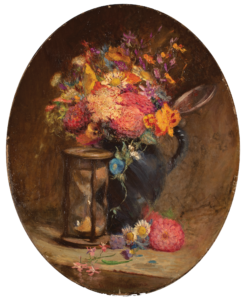 While John Ottis Adams has been the subject of several exhibitions, Impressions of Love was the first to emphasize Winifred Brady Adams’ work. The 28 works in the exhibition amounted to the greatest quantity of her art ever displayed. After years of John’s work overshadowing Winifred’s, the organizers of the exhibition gave both artists and their works equal weight by splitting the exhibition in two. On the upper level of the museum, the main focus was John Ottis Adams, while the lower level focused on Winifred Brady Adams and told the story of her training under William Merritt Chase, a famed American Impressionist. Shaun Dingwerth, executive director of the Richmond, Indiana Art Museum and curator of Impressions of Love, was a major reason the exhibition was able to show such a diverse range of works from both artists.

The George and Frances Ball Foundation can also be credited for the exhibition’s extensive collection. With its $35,000 grant to fund Impressions of Love, the David Owsley Museum of Art was able to fulfill its objectives of educating the public by preserving these original works of art. The fund covered two conservators, framing costs, and the various printing needs of the exhibition. Conserving the Adamses’ paintings ensured that their stories will remain in the public eye. After all, there is no better way to extend the couple’s artistic legacy than simply sharing their art, as well as their stories, with the world. John Ottis and Winifred Brady Adams shaped the arts in Muncie. Thanks to the David Owsley Museum of Art and the George and Frances Ball Foundation, their legacy lives on.