Picture a mildly cool afternoon in October, 2035. It has been a very long day, and you are waiting for a routine medical check. Nothing special—you have a healthy diet, exercise daily, and seem to have “good genes.”

When you walk into your doctor’s office you notice a large, rectangular, black object that could almost pass for a table. Upon a closer look, you see a grill of air vents (similar to the ones on your laptop) on the back of it, and the doctor’s fingers moving across its surface. Up, down, sideways, at varying speeds. Then the doctor looks up, acknowledging your presence. “Have a seat, we have a lot to get to.” Raising this black rectangular object to accommodate your presence, you finally see that it is a large computer screen. On it, you see your picture, bio data, and a lot of information you don’t understand.

And then the doctor says, “I see your heart hasn’t been normal lately.”

This story, although fictional, is close to scenarios that Dr. Shaoen Wu, an associate professor of computer science at Ball State, thinks will soon be possible with smart environments, which benefit from the combination of pervasive computing and machine learning to monitor specific health indicators1 . The idea of smart environments has been around for a while2 , but Wu believes that as machine learning computational ability continues to improve, so will the possibility of the idea becoming reality. Wu is particularly excited about smart environments because they use principles from his academic interests: smart health, wireless communication networking, “internet of things” (IoT), and autonomous robotics.

Born and raised in China, Wu received his bachelor’s degree in automation and master’s degree in control engineering before moving to the United States to get his doctoral degree in computer science and software engineering at Auburn University. At Auburn, he focused most of his efforts on wireless communication and networking. It was after he arrived at Ball State in 2013, at the insistence of students with interest in the topic, that he ventured into IoT research and technologies. 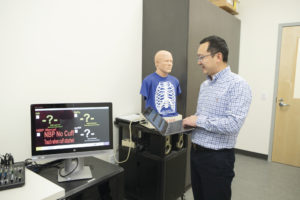 Dr. Wu demonstrates how artificial intelligence
can make the world of health care a better place.

According to the World Economic Forum, by 2025, an estimated 463 exabytes of data—the equivalent of 212,765,957 DVDs—will be created globally each day3 . And according to Wu, new technologies will enable and facilitate better computation of this data so that we can make sense of it.

“The future is health-oriented,” he said.

Understanding such data will be crucial to improving health diagnostics. At Ball State, Wu’s academic scholarship continues to move forward, powered by several grants and funding for projects, both within his department and in the University at large. In 2018, Dr. Wu procured a software donation worth over $350,000 from Arm, an industry leader in artificial intelligence computation. This donation provided licenses to use Arm’s Keil Microcontroller Development Kit. This software comes prepackaged with the ability to “create, build, and debug embedded applications.”

Knowing how to program embedded applications in their various forms is useful for students in Wu’s IoT class. The donation includes a software license for up to 30 students and additional hardware to use in class. Everything from smartphones to Apple Watches have embedded systems that communicate and transfer data to outside receivers (servers). The data, in the case of a smartwatch, could potentially alert an emergency service if your heartbeat suddenly becomes uncontrollable. This data can also be sent to your health care provider to improve your overall experience when you go in to visit your doctor.

Wu has been instrumental in improving the quality and speed of research across campus with the procurement of a graphics processing unit-based (GPU) cloud infrastructure.4 At its core, most scientific research involves a high volume of numbers. In the case of artificial intelligence, numbers come in the form of massive amounts of data. For the computer to process this data quickly and efficiently, it needs power, which is supplied in the form of bandwidth, the rate at which this data is transferred along a given path. In essence, for better scientific computing, the computer must be powerful enough to compute at a high rate. A computer derives its power from its processor. A GPU supports the kind of computation needed for scientific research— floating point computation.

Wu was central to securing a grant used in procuring a GPU-based cloud infrastructure system at Ball State, making it the only university in Indiana with such a system. The cloud-based nature means that researchers and students can access it from anywhere: from students in computer science working on a new machine learning algorithm to a group project in economics using data to determine the cause of a labor shortage in the agricultural sector.

The technology can be used to serve us but also can be used maliciously against us.” —Dr. Shaoen Wu

It is easy to imagine the possible unintended consequences of combining data with health care in this way, with privacy at the top of the list. The patient with the uncontrolled heartbeat has reason to be concerned about how the doctor got the data and what the doctor could do with it. This is not lost on Wu.

“Whenever you think about technology from history, another concern to me is about the human,” he said. “The technology can be used to serve us but also can be used maliciously against us.” With hackings and data leaks constantly in the news, it is easy to see why people might not be so excited about this future.

Wu’s solution is that humans must do better. “We are going to research how to protect the data and control access to the data,” he said. “Users must also respect the data.”

Wu also brings his forward thinking to his classes at Ball State. Students receive questions to review ahead of class discussions so he can fill in the gaps of what they might have missed or not understood. This, according to Wu, ensures that students are drivers in the learning process.

Noah Ziems, a junior in computer science who performs research with Wu, enjoys this approach. “The process always starts with me reading papers for many hours every day,” Ziems said. “After sifting through many papers, I sometimes come up with some wild ideas of my own. I run up to Dr. Wu’s office and start riffing ideas to see if they’re any good. After that, it’s just a matter of testing and refining the idea until it is a publishable paper.”

Ziems is very appreciative of Wu’s mentoring, saying, “Honestly, I think I would have dropped out if I didn’t find Dr. Wu.”