Borrowed Babies, Darkroom, Naked Underneath Our Clothes, Life’s Not a Paragraph. What do all these titles have in common? A successful attempt to establish the personal as the crux of any meaningful story. The author, Jill Christman, a professor of creative writing and this year’s recipient of the Outstanding Creative Endeavor Award, draws most on the intimate—filled with personal struggles, loss, and pain—to construct a relatable and genuine body of work that is both ingenious and inspiring.

Growing up “off-the-grid” in the Northeastern part of Washington state with no running water, she enjoyed reading from a young age. In part due to boredom, she read all the time. Even while riding her 1,200-pound horse, Moona, to school, she read. Her parents—dad a painter who taught at the Savannah College of Art and Design and mom a professional sculptor—understood the value of and helped nurture her interest in the arts.

Christman started the creative writing program at Ball State more than 15 years ago and has always stressed the need for students to learn how to communicate effectively. “[A]t Ball State, I’ve said, you know, we can have all the technology you want, we can have bells and whistles everywhere. And fundamentally, students need to learn, we all need to learn, how to tell stories effectively, right?”

For Christman, communicating effectively starts with the need to tell the story right. And peculiarly, as evident in most of her work, nothing is off limits. “I have never met a secret that did anyone any good,” she said. In Slaughterhouse Island 1 , published in Not That Bad: Dispatches from Rape Culture, a New York Times nonfiction bestseller edited by Roxane Gay and published by Harper-Collins in 2018, Christman details a gripping and gut-wrenching ordeal with a friend who raped her at a fraternity celebration at the University of Oregon. Christman uses her story to call attention to the stupidity of victim blaming and rape culture, writing:

“The thing about telling this story even thirty years later is that even though I know where the culpability rests—firmly—I have trouble soaking off the most dogged shame. I am scraping away the last of the sticky residue with my thumbnail.

“Yes, I did some stupid things. We all do. But now I know we’re allowed to be kids who mask our gut-deep insecurities with vanity. We get to wear crop tops and tight jeans with a ribbon of lace for a belt and high-heeled boots.

“We get to check ourselves ten times in the dorm-room mirror, necks craning to see how fat our skinny little asses look from the back, and we even get to guzzle sweet drinks and swallow harmless-looking tabs we hope might make us feel better or dance faster or look prettier or just forget. We get to want something to come easy for a change. We get to make every choice on that daily life scale from forward-thinking to utter self-sabotage.

“And we still don’t deserve to be raped. Not ever.” 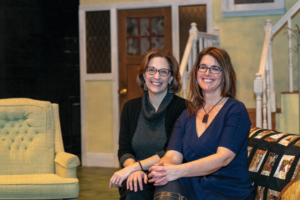 Christman (right) visits the set of Borrowed Babies with Jennifer Blackmer, theatre professor and executive director of immersive learning, who adapted the book for the stage.

This method of expression using writing is not new. For Christman, however, it is also a form of pushing for a change in societal attitudes about thorny issues. “Things persist when we do not talk about things,” she said. Her book, Borrowed Babies, published in 2015, does exactly this. Borrowed Babies, written at a time when Christman was pregnant, traces the lives of children borrowed from orphanages and placed in undergraduate home economics classes for use as “practice babies.” Science has since exposed the wrongs in such practice, but it was worth exploring as part of a larger question about the meaning of motherhood. “This is sort of unusual, in that it’s sort of a hybrid of historical research and memoir,” she told The Star Press 4 when discussing Borrowed Babies.

The cognoscenti know that one of the characteristics of a great writer is the ability of a frequent reader to trace a style or theme across the writer’s work. In Darkroom: A Family Exposure, arguably Christman’s most famous book, the same theme of the personal is obvious. Darkroom walks the reader through Christman’s early years in the remote hills of northeastern Washington, revealing childhood sexual abuse, deaths of close ones, and young adulthood episodes that involved drugs and eating disorders. But, just like in Slaughterhouse Island, Christman uses a painful story written with wit and humor to shift our perspective about her story. In fact, Christman wants you to know she is who she is because of her stories. Christman is a survivor.

“You need to write until you find the center of the thing you’re trying to say.” —Professor Jill Christman 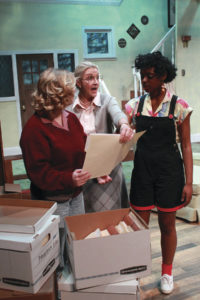 The cast of the Department of Theatre and Dance’s 2019 production of Borrowed Babies performs the play based on Christman’s book.

Christman brings her wealth of experience to her classroom, encouraging students to write with the aim of immersing the reader in a story. “You need to write until you find the center of the thing you’re trying to say,” she said about working with students in the creative writing program. This nudge to keep writing and experimenting can be both exhilarating and frustrating. Thus, one of the marks of a good teacher is how they help their students build the confidence to push through difficulties.

Valerie Weingart, a second-year master of arts candidate studying English with a focus on creative writing, largely agrees with this sentiment. She recounts her experience with Christman urging her not to give in to the fear of creative perfection on the first try. “Don’t be afraid to make a mess, Val,” were Christman’s words to her. “Allowing myself to be imperfect in my writing—to give up control as I draft a story, to explore—has given me the freedom to try new techniques and take my work in exciting directions,” Weingart said.

The creative writing major at Ball State, which has grown steadily thanks to the work of Christman and her colleagues, is also home to one of the country’s top three literary nonfiction magazines River Teeth: A Journal of Nonfiction Narrative. Christman and her husband and colleague, Mark Neely, currently serve as associate editors of the journal. Professor Christman was recently announced as one of the 36 writers to receive the prestigious National Endowment of the Arts Creative Writing Fellowship of $25,000. Christman was selected from a group of nearly 1,700 eligible writers for this national award.