How science created a theatrical genius

That’s the mot juste that describes Jennifer Blackmer, the 2018 recipient of the Outstanding Creative Endeavor Award. This yearly award is given to a current faculty member who is nominated by colleagues. A selection committee evaluates each application and announces the recipient at the annual Fall Opening Convocation.

Jennifer Blackmer, a professor of theater and executive director for immersive learning and the Virginia B. Ball Center for Creative Inquiry, is known to put her zeal for women’s empowerment into her creative work. This work often manifests itself in the form of plays. These plays exhibit all the trappings of a visionary who wants her audience to first hear her story, empathize, and then take action.

Two of her well-known plays, Unraveled and Alias Grace, both have a common theme: women empowerment. Unraveled explores how a woman, who is also a scientist, deals with the death of her mother, while Alias Grace is a stage adaptation of the novel by the famous author Margaret Atwood. The adaptation explores how women deal with class and power in our society.

The “dualities present in her plays” wrote Karen Kessler, professor of theater and the 2016 award recipient, “are what makes them so compelling to work and watch.” 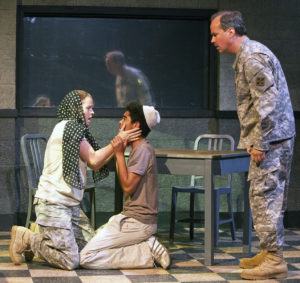 A scene from one of Blackmer’s plays Human Terrain. The play won $75,000 from the Tribeca Film Institute Alfred P. Sloan Foundation Filmmaker Fund. From left: Melissa Gerth as Mabry Hoffman, Antonio Mosley as Kemal, B. Weller as Captain Will Alford.

Another play, Human Terrain—which won Blackmer the Sloan Grant from the famous Tribeca Film Festival and a finalist position at the Yale Drama Competition—is a military drama that tells the story of an American anthropologist working in Iraq for a military program, the Human Terrain System. The anthropologist, Mabry Hoffman, is caught in a dilemma as she tries to help her new friend, an Iraqi woman, survive while trying to balance her commitment to the military program.

Human Terrain is now on its way to becoming a movie with production slated to start in Spring 2019.

Her fervor diffuses into conversations with her students here at Ball State. Since she arrived at Ball State in 2003, Blackmer has taught several classes including directing, playwriting, and not surprisingly, special topics in science on stage. Her enthusiasm for her students and the Ball State community is indeed palpable. “It’s OK to suck,” she tells her students while reminiscing about the times “she wanted to quit” throughout her career.

“She has a unique way of blending her interest in intellectual pursuits—science being chief among them,” said William Jenkins, chair of the Department of Theatre and Dance.

Delicate Particle Logic, another one of her plays, crystallizes how her other passions— science, especially physics, and history—blend perfectly with her creative activism for women’s empowerment. The play highlights the story behind the discovery of nuclear fission. It shows the result of the politics of discrimination during the Nazi era. Lise Meitner and Fritz Strassmann contributed heavily to the discovery but were never recognized since the Nobel Prize only went to Otto Hahn after World War I.

“I auditioned for the theater program at the University of Evansville,” Blackmer said as she described the scene that led her to the world of theater almost 20 years ago. “And I told my parents,” she continued, “that if I do not get accepted in the theater program, I will go probably elsewhere and study physics.”

This article was written by Adeboye Olaniyan.