As an early career researcher in evolutionary biology, Dr. Jess Ward is investigating the evolution and function of behavioral interactions, like courtship rituals and predator-prey relationships, and how they alter in response to environmental change. For one of her projects, she’s received a $15,000 grant from the Indiana Water Resources Research Center to study degenerative neurotoxic effects of cyanobacteria or blue-green algae on behavior. She hopes to answer  questions such as: Are fish slower at getting away from predators? Or are they slower at catching prey due to motor deficiencies? And do they have trouble  finding a mate? 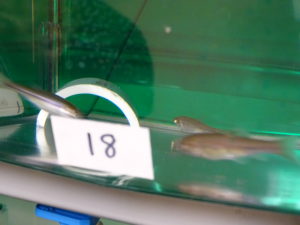 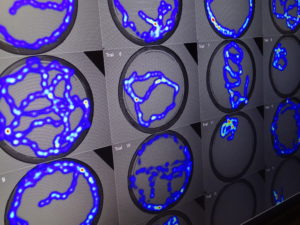 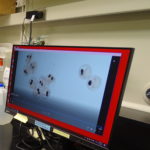 A display of an experiment looking at enviornmental and genetic factors influencing the development of personality, beginning with differences in the locomotoractivity of embryos.

In Summer 2018, Ward had several students helping her in the lab. “They’re integral to everything I’ve done. They are the heart and soul of the lab. They keep everything running.”

Ward’s students are learning the ins and outs of running an animal behavior research lab, students like Kokomo native and Ball State junior, Hanna Mullinax. “I didn’t realize how much went into research. I didn’t realize all the maintenance it took like feeding the fish twice a day, coming in doing all the water exchanges, and so I really learned a lot about what research life is like.”

And for grad student Hanna Termarsch, a Troy, Michigan native, this is the first time she’s worked in an indoor lab. She studied snakes on Beaver Island near Central State University as an undergrad. Termarsch never thought she’d study fish, but Ward’s enthusiasm convinced her to study at Ball State for her master’s in biology. 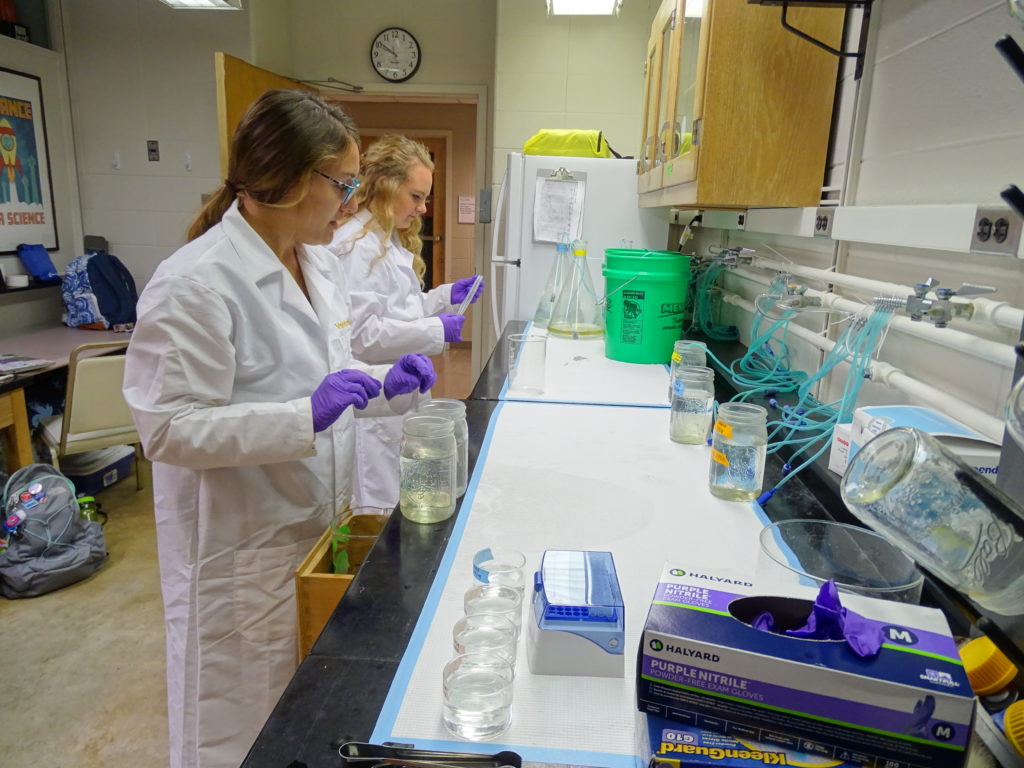 Autumn Auxier (left), a junior in Genetics & Zoology and Hannah Termarsch, a graduate student in Biology, both work in Dr. Ward’s lab.

It was definitely my middle school and high school science teachers, both women, who saw the light in my eyes whenever we did something interesting. So they definitely pushed me towards the scientific field.” —Autum Auxier

“It was really just her, her passion, her excitement for this lab that really got me into it. I never thought I’d enjoy working with fish. I never considered it. And I never worked inside in a lab environment so that’s new. So it’s definitely a new experience.”

The women in Ward’s lab are bucking the odds of fewer women in the STEM fields. All of them have had mentors who’ve encouraged them in the hard sciences. “It was definitely my middle school and high school science teachers, both women, who saw the light in my eyes whenever we did something interesting. So they definitely pushed me toward the scientific field,” said Autum Auxier, a Ball State junior from Wolcott, Indiana.

One of Ward’s students even worked as a teacher before returning to get her master’s in biology. Gina Lamka is from Dallas. “Before I came to Ball State, I was actually teaching fourth grade science. We had a lot to do with bringing children, especially girls into the scientific field—bringing them out into the woods and we were able to do more hands-on activities, which was great. I had a lot of the students come up to me afterward, saying that’s what they wanted to do.”

Ward hopes her work with her students will, in turn, help her get National Institutes of Health funding to study the effects of neurotoxins on cognition, decision-making, and behavioral performance. “We’re looking at the performance of larval fish, but then we’re going to grow some of them up and test them in adult stage to see whether the effects are persistent in adulthood.”

Ward said her field is just starting to figure out how human activity changes and how animals communicate with one another, potentially driving evolution in new directions. “It’s uncertain whether or not there are links to human health as well.”

Those possible links will be studied for the next two years by Ward and her students.