At 23 years old, Jessica Reed, who has autism, is learning how to be more independent. “I don’t think she’ll ever be able to live alone,” said Jessica’s mom, Patty. “She will always need somebody to be there to support her and supervise her due to safety, but yes, it is important for her to be independent, to have a job, to lead as much of a normal life as possible. The more tools we can provide people with disabilities to be independent, the better their lives will be.”

One of those tools was Dr. Laura Bassette’s study on exercise and autism. A Ball State University researcher in special education and a Board Certified Behavior Analyst, Bassette noticed those with autism struggled with motivation for physical activity and this impacted other areas of their life. Trained as a behavior  analyst, Bassette wanted to use those principles to develop interventions and engage people with autism in exercise. “For people with autism, there is a struggle with motor coordination. So even just the ability to learn how to use your body differently or work different muscles can be beneficial beyond just weight loss.” 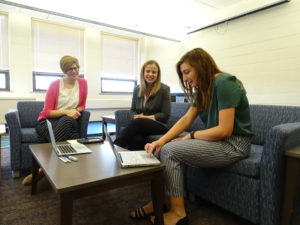 Bassette initially earned a $2,000 ASPiRE grant. Those dollars helped her purchase an iPad, dumbbells, and a mat to work one-on-one with study participants  like Jessica at local gyms. An exercise app designed for people with autism was used to create different workouts. Within the app, participants could watch how the exercise was done and then do it themselves with guidance.

Bassette is now moving on to the next phase of her study and plans to expand the program. She just received $15,000 from ASPiRE to do just that. “The ultimate goal would be to have peers without disabilities be able to work out with them at the same time. That’s more of a truly inclusive setting where they’re working out alongside peers without disabilities,” said Bassette.

Jessica’s mom is glad she signed her daughter up for the program. “When we first started, she really couldn’t do the exercises at all, and then by the end of the program, she was getting more independent in choosing which exercises she wanted to do and kind of enjoying it more instead of it being like a chore.”

A screenshot of the app displaying several workout routines.

Jessica has shown more independence through the program, and no longer views exercise as a chore. She even works a couple days a week at a local bakery. Through tears, Patty explained that independence and what happens to their children after they’re gone is what parents in her situation worry about most. “We hope that we have a setup in place to help her be independent, but you never know. Luckily, Jessica’s brother is tuned to her needs. I’m hoping he’ll take over when I’m no longer able to do it.”

And perhaps there’ll be more programs like Dr. Bassette’s to help them become more independent. Bassette’s research has been accepted for publication in the Behavior Analysis in Practice journal. She also hopes to present it at conferences in the future.