Ben Bascom may hold a doctorate in English, but he’s also a quasi-historian who’s working on a book about the failed literary endeavors of five tragic figures from the early United States. “In many ways, the figures I work on thought they were as unique or culturally significant as someone like Benjamin  Franklin, but in their efforts to prove themselves they end up appearing quite queer—meaning they don’t fit within the social norms that operated in the early United States.”

Bascom received a $21,000 National Endowment for the Humanities grant in addition to a $6,000 ASPiRE grant to write a book based on his dissertation  narrating the lives of ill-fated figures and their places in literary culture. “They all aspired for recognition and achievement, and hoped to have themselves documented in their own books but were unable to obtain those goals.”

One of those profiled was a mechanic who invented the steamboat in the 1780s but lost his patents once the Constitution was ratified. Bascom explains that this poor inventor dedicated his writings to exposing those he believed wronged him, which happens to be several celebrated Founding Fathers. “It’s a tale of failure; of someone who felt like he deserved recognition but only received posthumous accolades.”

In 2018, more than $140,000 was awarded to Ball State University’s Junior Faculty to fund their creative projects and research. The awards are part of the ASPiRE Internal Grant Program for faculty who have been with the University for less than five years. Junior faculty have the opportunity to receive an award up to $15,000 to fund projects involving study or discovery that could eventually lead to external grants. Here, we profile two winners from the  Departments of English and Special Education. While one is working on a book about literary failures, the other is hoping to put adolescents and young adults with autism on a path of success through exercise. 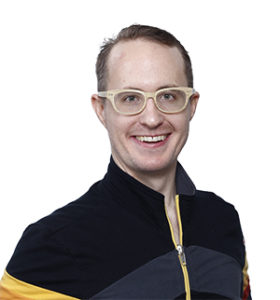 Dr. Ben Bascom is writing a book that chronicles the lives of five men whose literary efforts were lost in the shadow of more prominent early American Writers.

Another was a black Revolutionary War veteran named Jeffery Brace, who settled in Vermont. Emancipated after the war, Brace’s children were stolen and  placed as indentured servants, and his property was vandalized by a white neighbor who wanted it for himself. While the veteran’s property rights were  recognized, he was subsequently run out of town. And just like the other people Bascom studies, the veteran’s written memories were soon forgotten. “They are a series of people who left behind what could be considered failed books, and the failure of their books suggests something about the culture of the time that I  study.”

Bascom points to the idea that these real-life characters lived in the shadow of people like Franklin. “These people that lived on the margins of society, and the  books they wrote remained on the outskirts of cultural memory. Either they never made it into circulation as they had hoped or the material copy of the only remaining book that they wrote is in shreds, missing half the pages that it originally contained.”

Bascom was also awarded a summer fellowship from The Center for American Literary Studies at Penn State to work on his book proposal, introduction, and to flesh out the rest of his chapters. He was one of eight people chosen to participate from an international application pool.

The grants he received will allow Bascom to use the Spring 2019 semester to finish researching at the American Antiquarian Society and write his book, Feeling Singular: Masculinity and Desire in the Early United States. When he’s not working on his book, Bascom, who joined the faculty in 2017, teaches pre-1900 American literature in the Department of English.