Imagine the height of a dime sliced 1 million times—that’s a nanometer. Dr. Emil Khisamutdinov is investigating the nucleic acid nano-world as an assistant professor in the Department of Chemistry at Ball State. “In our lab, we create different sizes and shapes of nanoparticles made of nucleic acid  biopolymer.” Known to store genetic information, DNA is viewed as a polymer material used to create various types of particles in Khisamutdinov’s lab.

Khisamutdinov and his collaborators from the University of North Carolina at Charlotte and Clemson University received a $1.8 million grant from the National Institutes of Health. Part of their investigation is looking at the toxicity of these nano-objects. “Nucleic acid nanoparticles are pretty good at targeting and killing cancer cells.” 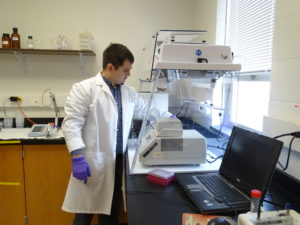 Dr. Khisamutdinov a twork in his lab studying the design, construction, and application of RNA-based nanoparticles.

As a co-investigator, Khisamutdinov and his team will investigate the stability and functionality of the molecules, choosing the most stable ones to see if they trigger an innate immune response. “Everyone sees nanoparticle potential as drug carriers. This field is blossoming now. However, no one has studied their toxicity in depth.”

On campus since 2014, the biochemistry professor and his collaborators hope their nanoparticles will reach commercial production and play a role in fighting cancer.

Khisamutdinov has also received funding from the Indiana Academy of Science and an ASPiRE Junior Faculty award.