The median income for a web developer is $65,000. It’s $80,000 for a computer programmer and $100,000 for a software developer. According to U.S. News & World Report, the top 10 technology jobs all have low unemployment and pay well. But if you haven’t been exposed to these careers, you may not know they exist or that they’re an option.

Two Ball State researchers are hoping to change that after creating STEM oriented workshops for middle and high school age students. Dr. David Hua and Kirsten Smith began their partnership in 2014. They created a series of IT Workshops in a Box, which included STEM related activities. Initially, they ran these workshops at local youth serving organizations, including Motivate Our Minds and the Muncie Public Library.

Wanting to reach as many students as possible, they turned to the “train the trainer” model. “That’s when we realized that we as individuals on campus can only impact a small number of kids,” said Hua. “It was imperative to us to try to empower other organizations to do this with their kids. That was the goal.”

With a $6,000 grant from the Community Foundation of Muncie and Delaware County, Hua and Smith invited community nonprofits that already work with underrepresented youth to learn about STEM fields and then in turn, spread the word and expose students to high-paying technology jobs. “Right now, things are getting a lot better,” said Smith, “but it’s still a very heavily dominated white male industry. And so we’re really trying to expand the opportunities for people. And starting with the kids seems to be the best way to do it.”

The local library sent some of its employees to participate in the three-day workshop. Olivia Germann, a youth services specialist at the Maring-Hunt Library was one of them. The library offers a Digital Climbers program where it introduces new technology to its young patrons. The library immediately included some of the “train the trainer” activities like computer dissection in its own program. 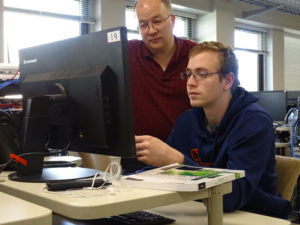 Dr. David Hua works with one of his students

“I had never opened up a computer before. I never would have thought to do that. And that, to me, was the biggest thing we implemented here in our Digital Climbers program.” —Olivia Germann, youth services specialist at Maring-Hunt Library

It impressed Germann. “I had never opened up a computer before,” she said. “I never would have thought to do that. And that to me was the biggest thing we implemented here in our Digital Climbers program. And it’s gone really well. It was really fun to learn about it and then be able to bring that back to the kids and say, ‘Hey look at this. Look at this cool thing I learned. Let’s do it together.’” Germann also said library staff encourage students to hone their skills and consider turning them into a career one day.

Hua, Smith, and their team created videos of the workshops. Their next goal is to post them online and encourage other nonprofits to watch them and teach their own students about the benefits of careers in technology.

“We’re really grateful to The Community Foundation of Muncie and Delaware County because we really couldn’t have done it without them. It’s not a huge grant in terms of money, but I just think we’re so committed to getting these opportunities out to kids, it was enough that allowed us to do it. It was great,” said Smith.

When not creating technology activities for workshops, Smith is the associate director, technology officer and labs manager for the Center for Information and Communication Sciences (CICS).