The Contracts and Grants Office and the Sponsored Programs Office at Ball State University have merged into one. Now a single unit, the office name is Sponsored Projects Administration, or SPA for short. Despite the alluring name, massages and facials are not in SPA’s future. 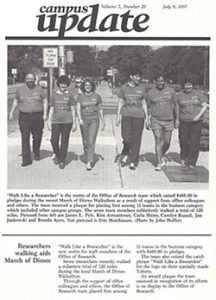 July 1987 edition of the Campus Update featuring Office of Research staff and graduate students participating in the March of Dimes Walkathon, including Brenda Ayers (far right).

SPO AND CGO YEARS AGO

Prior to the merger, the Sponsored Programs Office (SPO) and the Contracts and Grants Office (CGO) were two offices with two separate directors and reporting structures. SPO was responsible for the pre-award side of the funding process and reported to Academic Affairs. It assisted Ball State personnel in proposal development and procuring external funding to conduct their research, creative, and scholarly activities. Meanwhile, CGO supported faculty and their departments in post-award administration and reported to Business Affairs. Now that SPO and CGO no longer exist, SPA refers to these two roles simply as the pre-award and post-award sides and reports solely to Academic Affairs.

Brenda Ayers, the office services coordinator who celebrated her 35th anniversary with SPA this August, describes SPO and CGO as they were decades ago. When Ayers started working at SPO, the office relied on typewriters and paper copies of grant proposals.

Ayers recalls when the office got its first Lanier word processor. “It was the best thing I’d ever seen!” she says. “And then all at once they were talking about computers, and I said, ‘Oh, I have to keep this word processor!’” The office acquired its first computers in the early 1980s, which caused work efficiency to skyrocket.

Robert Morris shares what the SPO and CGO structures were like when he began his current position as associate vice president for research and dean of the Graduate School. “Back in 2007, there was a bit of a gap between the Sponsored Programs Office and the campus. People were assigned to sort of silo positions, so the skill sets were by person, not across people. If you had a proposal due and someone’s child was sick two days before your deadline, and you needed that person, then that was a problem,” he says. “Now, everybody does everything. It makes it easier for people to function in terms of life. So when life happens, there are plenty of people who know how to do the same thing. That makes it seamless to the university.” 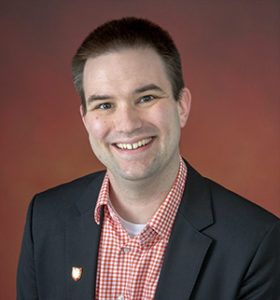 While they were separate, the two offices worked in close conjunction and maintained a good working relationship, says Justin Miller, director of SPA, but the separation of offices created challenges for faculty as they navigated the funding process. Miller recalls Dr. Paul W. Ferguson’s immediate and constructive involvement with the offices upon his arrival to Ball State. “One of the first things he did in meeting with faculty and departments was to find out what’s working and what’s not working,” says Miller. “I think he quickly realized that the research enterprise on campus could be streamlined, and that faculty were finding a hindrance to work with two different offices and different expectations and different working relationships.”

Ferguson, Miller, Morris, and others from the two offices then formed a task force in early November 2014 to study peer institutions and decide how to improve research operations. This task force discovered that most institutions of a similar size have centralized research administration and combined offices. This structure was effective for similar institutions, which suggested that merging was the best solution for SPO and CGO. On New Year’s Eve, the merger became official with Ferguson’s signature.

The goal: Create a more fluid transition from pre-award to post-award. Miller says, “One of the key points behind this merger is to try to get everybody on a level playing field and to help smooth out the transitions from pre-award to post-award so that everybody’s on the same page. We’re trying to reduce administrative burden, both for us and for faculty because the less explaining we have to do back and forth, the easier it is to administer the award, and the more the faculty see this seamless transition.” 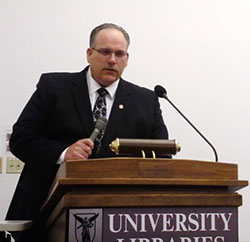 SPA has a long road to travel before it is completely merged. Every staff member is moving to a different office, university accounts and websites are being combined, physical and electronic files need to be merged, and every employee at SPA is getting used to saying “Sponsored Projects Administration.” Miller says, “It’s a deliberate process, but we’re confident that at the end of it, it’ll be a much more unified presence on campus.” As those from the post-award side understand more about the pre-award side and vice versa, SPA will grow stronger in developing proposals and then administering the awards. “A seamless, cross-trained, paperless, highly effective unit—that’s where we’re going,” says Miller.

Morris hopes for “a whole new outlook by the campus” by next spring so that everyone is “happy with all parts of SPA.”

THE DOOR IS OPEN

SPA welcomes all people and their ideas. As Miller says, “The door is always open. The email box is always available. We’re happy to meet with anybody, any time, to talk about anything. We may not agree with you. We may not be able to make it happen. But we want everybody to know this is their opportunity to shape the future of the research enterprise on campus.”

Ayers, Miller, and Morris express that this entire merger, and everything SPA does on a regular basis, is for the people. Some of their favorite memories are of working with principal investigators and sharing their excitement when proposals are granted. Miller says, “That, to me, makes all of the late nights and early mornings and weekends and all of that completely and totally worth it. These people are doing groundbreaking, cutting-edge, community-driven, student-driven work, and you’re playing a tiny part in every single one.”

SPA plans to host an open house this fall.