Melody Bernot started studying pharmaceutical and personal care product contaminants in aquatic ecosystems when a graduate student of hers expressed an interest in the subject. The two worked together to craft rational hypotheses—all of which were subsequently proven wrong. 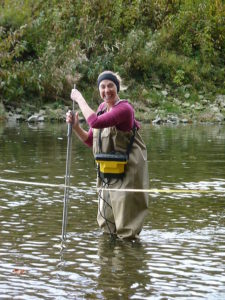 Bernot enjoys a day of sampling on the White River.

This intrigued Bernot, associate professor of biology and Ball State’s Researcher of the Year, enough that she kept examining the topic after that student graduated.

“The questions about how humans influence ecosystems have driven my work from the very beginning. I always say that I moved into emerging contaminants because all my hypotheses were wrong,” she says with a smile.

These days, Bernot and her students examine a suite of pharmaceuticals and personal care products (PPCPs) that come from humans and end up in local water systems—and their hypotheses are usually correct.

“Anything we put into our bodies, we metabolize only a fraction of and then we excrete the rest,” Bernot explains. “We are continually putting things into the waste stream, which is processed and then goes, locally, into the White River.”

Other researchers have looked at doses of PPCPs that are lethal to aquatic organisms, but few have examined the effect of lower concentrations.

“We know a lot about Tylenol, its therapeutic effects, and lethal doses in humans, but we don’t really understand those kinds of things on algae and snails and fish. What we find in the White River is nanograms per liter, which is nine zeros—really small concentrations that are well below therapeutic doses and well below lethal concentrations. But time after time we see changes in reproduction, growth, and behavior with aquatic organisms, so we’re really trying to wrap our head around it.”

On top of that, learning how one compound affects ecosystems is helpful, but it doesn’t provide the full picture. Ecosystems are bombarded with hundreds of compounds, some of which create new effects when combined.

“We’re moving toward understanding multiple stressors at the same time—the number of PPCP compounds versus an effect, rather than how acetaminophen alone affects a fish,” Bernot says. “Acetaminophen is interesting because it’s like grapefruit—it can potentiate drug effects. So if an aquatic organism is exposed to acetaminophen, even if it’s well below therapeutic doses, it may potentiate, or enhance, the effects of another drug in the environment. So there are a lot of interesting interactions.”

The effects on drinking water are important, but Bernot has more reasons to study aquatic ecosystems.

“Strictly from a basic need for life, water is fundamental. That is certainly one of the core reasons—trying to understand both water quantity and water quality,” she says. “But there is a whole host of other things. I’m a natural history lover, and there are the aesthetic things. There’s preservation for biodiversity and myriad arguments for biodiversity in maintaining ecosystems as well as things like finding medicines or understanding disease with genetic diversity.”

Bernot doesn’t have to look far to find others who share her interest. Ball State has nine aquatic ecology faculty members who work on different areas of aquatic research and team up as their work overlaps.

“I collaborate quite extensively on the PPCP work with my husband and Tom Lauer. I am not organismal —I’m chemical,” Bernot explains. “So all the organismal work has been in collaboration with them. It’s really been a joint effort, driven by students and guided by multiple faculty.”

Bernot enjoys working with all of her colleagues, but her favorite collaborator is her husband, Randy, an assistant professor of biology.

“We have fun!” she says. “He’s the best collaborator in the world. We collaborate on so many things and have expertise in different areas, so it just works really well. We met in grad school, so we’ve been working together as long as we’ve known each other. We’ve never known anything different.

“We write lots of grants together. We’ve published lots of papers together. He does parasites, and I don’t get involved in parasite work because I don’t understand it. And he doesn’t get involved in the basic elemental cycling. But we’ve collaborated on almost all of the PPCP work. We have our own little worlds, and then we collaborate in terms of the scientific questions that we ask.”

“I would like the body of work to highlight which compounds may cause adverse effects,” she says. “I think that it’s probably true that some of these compounds are getting degraded quickly or really aren’t necessarily causing huge issues, but I would like for us to figure out which ones we need to focus on and potentially find alternatives for and regulate.”

What happens when the available tools are not ideal? If you’re Melody Bernot, you find a way to improve them. She learned how to make and use microelectrodes in graduate school and found them useful but fragile.

“The microelectrodes are a lot of fun to work with. We put a bunch of electronics into syringes so that we can measure things at the micron scale. I’m a microbial ecologist, which is synonymous with ecosystem ecologist because microbes do everything,” she says. “In the sediment or in algae biofilms we can get really fine resolution of nitrogen and oxygen and pH and temperature, so we can understand basic physiochemical dynamics. A whole host of things like egg success and chemical breakdown are dictated by the physical and chemical environment.”

However, traditional microelectrodes are too delicate for field work. Using grant funds from the National Science Foundation, she worked with John Decker, a machinist technician in the Department of Physics and Astronomy, to create a field-ready microelectrode sampling kit.

“He’s a genius,” she says. “I’ll say something obscure, like ‘We’re kind of thinking we want to…’ and he comes back with all this color-coded stuff that makes sense. He always has his own flair for making it better, like he intuitively understands what we want and then thinks of things we didn’t to improve it.”

Bernot has provided the improved microelectrodes free of charge to 25 institutions around the country as well as using them with her own students.

“It was a natural transition from much of what I’ve done in my graduate work but made better—we can now log continuously, we can throw them around in the field. They’re glass, encased in syringe, so they’re a little bit more protected, but you can still get micron resolution.”

Collecting samples as part of the RiverPACE project.

“I love working with students. I basically take anybody who seems interested,” she says. “Really, at the end of the day, the students are the heart of it.”

Bernot puts more weight on her students’ interest in the subject than on their previous knowledge.

“You can look up what we know. That’s not the point of science. The point of science is to advance what we know and find the things that we don’t know,” Bernot says. “So you’re coming in on an even playing field, whether you’re an undergraduate or a faculty member. My students teach me things every day because they’re doing stuff we haven’t done before.”

Bernot fondly recalls her own time as a student, keeping fishing rods in her car and collecting samples from interesting places.

“We would camp in the back of Walmart, which was interesting, for its ditch. That was our urban freshwater system,” she says. “I don’t think the students believe me, but I used to do a lot of field work. I found a discipline where I can spend 50 percent of my time in waders and 50 percent of my time with beakers. That’s a perfect mix for me.”

Her interests have adjusted as her career required. Even though Bernot now spends most of her time running data on a computer, she enjoys that too—especially when the meaning of the data clicks for a student.

“I always like the data stage because you can see the excitement that they found something. A lot of times what we’re doing is invisible, and you don’t really see the fruits of your labor. You’re just working and hoping something works out. There have been a number of students who, when we sit and look at the data, are as excited as I am, and they’re just like ‘wow!’” Bernot says. “Just to see data manifest into an effect is always the most fun.”

Bernot attributes a big part of her success with her students and research to the people and resources at Ball State.

“There’s no way I could have advanced a pharmaceutical initiative without internal support beyond my start-up. Well beyond my start-up,” she says. “That’s been as student grants and faculty grants that we’ve gotten consistently that just give that little extra push we need to see stuff through.”

Researchers resting on a hill by the White River after a day of sampling.

Bernot’s relationships with her colleagues have also made her time here enjoyable.

“There are these weird things that happen in the background here that just make your life easier,” she says. “I honestly think that there’s nothing comparable to the support provided. I can just focus on the questions and analyzing the data. I don’t have to worry about a lot of the administrative stuff.”

For Bernot, a lot of the joy of the science is in the discovery.

And that is exactly what Bernot continues to do at Ball State.